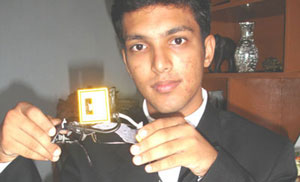 An Old man is happy that he sparked the genius in his grand son. The Old man from Chhattisgar (India), was suffered a paralytic stroke six months ago and his physical incapacity made his 16 year old grandson Apurv Mishra to think of an invention to help the disable. The device, Glabenator, was adjudged the world's third best engineering project at the International Science and Engineering Fair (ISEF) at Indianapolis, US, from May 7 to 13.

ISEF, the world's largest pre-college scientific research-based competition, had 1,500 participants from 47 countries this year. Apurv, a class 12 student of DAV School, Bhubaneswar, was among eight teenage scientists who represented India. “Glabenator” (from glabella, which means the smooth part of the forehead above and between the eyebrows) is a device for the immobilised to operate a mini computer. Originally in the shape of a helmet, Glabenator has gone through many improvisations. The present model, the fifth, can be fitted like a pair of spectacles. A twitch of a muscle is all it takes to operate it. A sensor and a transmitter are connected to it. If the disabled person wants to communicate that he needs water, he has to move the eyebrows to get the toolbar on the message menu on the screen. The person can then scroll up or down to select the water option and a voice in the computer will say I need water. Apurv has tested his invention on 83 patients. He is now exploring other possible uses of Glabenator such as switching on fans and lights, and operating switch panels on planes or during military combats. The young inventor is looking for sponsorship to get a patent for his device, which, will cost only Rs 1,300.

Apurv, who started using a computer when was in class 5, invented a device four years later that won him recognition of the Council of Scientific and Industrial Research. Finding that students who shared bottles ran the risk of infection, he invented an attachment that could be fitted to the bottle to drink water without one's lips touching the mouth of the bottle. His next concept is water computer or computation using water flow. Apurv Explains that Paul Sermon of MIT is working on fluids for computation. On that basis, now in am working on how water can be manipulated to use for computation. It is yet to be completed. I have to balance study and research. He has his goal set, to be a scientist to develop new technology aimed at a deeper interface between man and machine. He has no fascination for IITs, which he says merely make students employable. Apurv wants to go abroad for higher studies. The boy keeps in touch with international scientists via email. Steve Mann of the University of Toronto, known as the father of wearable computers and the first cyborg in the world, guides Apurv to some extent. He considers Steve and Dean Kamen, a famous inventor in the US, his role models.
Posted by Jeevan at 10:42 pm

Very good info...Hope he gets the sponsorship and make the device affordable to the common man..

Glabenator? Reading abt it for the first time.

Nice post, so nice to see a young man want to invent something for the disabled. I think he is going to be famous one day.

Your blog is turning into a news kalanjiyam these days. Good job!

...Way to go "Apurv Mishra" goodluck!Many people will benefit ur invention of course esp. the disabled persons ..how nice of u to think about that, Hats Off!! GOD bless you!

..have a great week ahead!

Karthik – Thanks, lets hope he will find more useful things for people.

Aruna – Thanks a lot Friend;)

Kathy – That’ nice to hear your grand grandpa was Indian. Sure your blessing will make him to achieve more. The weekend went well, hope u to had it.

oh wow!
This is one heck of an invention...and people say india is an "developing country"...!!

when i read about this invention i am reminded of the great scientist Mr.Stephen Hawkins.

Looking for information and found it at this great site... »

What a great site »