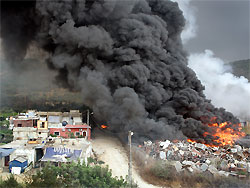 A cute little was watching the sky innocently
Form the glass windows, with wonder in his mind
and tears in his eyes what’s that, a fire like a ball
before he think the ball fell near his residence and
burst with tearing sound. the glass window
the glass window smashes into pieces in the vibration
the pieces stab on the cute’s body with holes
the white skin turned into red skin
my heart bleeds, feeling the pain of the cute.

This was an incident happening in the Lebanon; really I worried when I saw that kid photo somewhere.


A country which faces bloody incidents, everyday
Many innocent lives loss every day in the blast's
The Armies go on searching for the humans,
Who are not fit for living, we call them as terrorist
Army’s form countries, sacrifice their lives
Even though, the country (Iraq) dint gets peace to live

Before this, another country is facing a situation like them now
This was different; it was not the fight between Armies and terrorists
This fight was to save two persons, who belongs to Israel,
Who was captured by Lebanon based Hezbollah militants
For this the loss was innocent lives, who were not connected to this
They are playing with bombs and weapons, in this
Many innocents are killing; many leave the country to save the life
Warning comes; the attack will be in full breath
Save your life, go some where, will not care if u die.
Posted by Jeevan at 8:55 am

There was an absolutely harrowing pic of a four year old boy with fractured arms and a bruised chest, sitting up on a hospital bed somewhere in Lebanon, with the most beautiful smile I have seen in my entire life on his face, the other day on the New Indian Express.

Its hard to digest when ppl' kill each other. Just becoz one has the strong support og super power, it doesn't mean all other countries are bad. They fight for just 2 ppl' c;mon, I don't take it at all. It a destruction thru' the name of somebody.

Priya – even animals is the forest are better for these persons, animals just hunt for there food, not like these silly.

liked the way you wrote this. man, we must do something to help this world, to help lebanon. where is god when u need him.

Jeevan - There are still horrible deaths in Lebanon. It's a gory sight to watch even in the news. What can we do other than just pray that a miracle should happen and terrorism should be curbed by the almighty?

GP – Thanks, sure we must do something, how can we help? We are just simple persons; we are blogging form a corner in this world. We can only pray and feel sorry for the innocents. See even they are not obeying the UN Security Council, then why they created that organization.

Pavi – At least we can feel happy that our Indian have safely return to India. It’s a cruel against human feelings.

... heartbreakin' news again, when will be this war ends?