In the recent days peoples interest on listening Radio’s have increased. Back days hearing to Radio was very bore for me, but now it was a good entertainment for my ears and mind. In the old days the people in chennai woke up by hearing M.S.Subbalakshi’s famous devotional song cowsalliya supratha rama poorva…. I used to get ready to school by hearing the advertisements in Radio from the nearest Teashop. We can tell that from last 4 years radios have reaches every corner of the city, because of private stations jump.
When Suryan FM of Sun Network put foot on the Radio, they introduced many programs relater to films by covering people by giving them chance to dialing and ask their favorite songs and there intro of Ooresuthalam vanga is a program where the RJ’s visit a location every day and meet people directly and make them to talk in the radio and give information about that place, was a nice program and also my favorite one. They also not even leave the kids, there was a program where the kids call and talk. When Suryan was going like this, the enter of Radio Mirchi attracts by “It’s Hot” waves.

If Suryan was attracted people by its different programs, Mirchi attracts people by its young talented and humored voice of the RJ’s, it also move very fast with us. 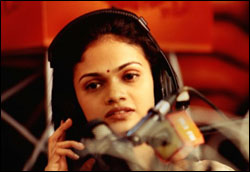 “Hello Chennai” the voice of Suchitra’s is the best welcome of the day for others and me, wow! what a wonderful voice she have. The prank speech of her makes the show more interesting. She discusses variety of topics every day and people call her and share her thoughts and there experience of the topic. As it was live, she tell some of the important incidents and news in between happening in the city and the traffic update in morning and evening was very useful for people driving vehicles. If I dint tell about our “Joot Ajai” this post will be waste; Ajai an excellent RJ, who has a good sense of humor and some times his Chennai Tamil was very funny, his voice of telling Joootttaaaaaaaaaaa…. turns our attention towards the radio. If some other RJ’s join with ajai the show will be more attractive. These Radios also giving free passes and tickets for newly released film and music programs whoever call them and win some contest, some days back they went further and auction the dresses were the actor Surya used in his film Silunu Oru Kaadhal to collect funds for a charity. This week was very hottie because of Matter Manikam, who is taking actress Namith in his Auto (just a imagination), today is Sandhya and tomorrow is who? This show brings much laugh in me, its pure funny show. If u r in chennai just listen to matter manikam and enjoy. 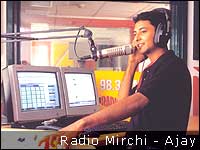 In the recent days there were some more FM stations have open in chennai the Daily thandhi started an FM called “ Star India’s “Radio City” and Reliance’s “BIG”. Now there is a healthy contest between Radios and selecting RJ’s (Radio Jockey). The situation brings more talented people before us as RJ’s. Some of the RJ’s worked on different stations have moved to new ones, and the VJ’ of the televisions also went on the air (I mean on Radio’s). There are many reasons have said for them to move, like expecting more salary, giving importance for their talents. I am happy to tell, that my Friend and our co-Blogger Reva was RJing a program Vayaraga on Hello FM 106.4 on weekdays form 9 to 11.pm. She was very kind to put my favorite song on her program last week, if any one has time just listen to her show, she tells much information! The searching for the RJ’s with new and different voice is going on… between the stations. We can hear the Radio in every teashop, petrol bunk and small shops, the FM’s have become a gracious gift for the Auto drivers, all autos have radios, which go on running. If we go on the ECR, we can hear the sounds of Radios esp. the Radio Mirchi rocks the most in much car’s, and It makes me to reduce listening to CD’s and cassettes while traveling, because all latest and old songs are relay by these radios. The information they give on this shows are very good. Esp. in this cool monsoon time in chennai, listening to these Hot Radios’s is really very warm.
Posted by Jeevan at 2:04 am

Radiocity has changed its frequency to 91.1. The choice of songs in BIG and Hello FM are really good. Yeah Suchi and Ajay rock...Good post...

Jeev: Thanks for sharing. I have always liked FM and I will check if its possible to listen online thou'.

i am a fairly newcomer and i enjoy your posts on a regular basis. you give me a nice viewpoint about chennai, my old hometown. congratulations & keep up the good work :).

by the way, are any of the chennai fm stations available on the net? do you know? thanks.

I too love Suchi's voice. Read all your posts i missed for the past 10 days. Nice posts Jeevan. Its nice to know that you have to been to Blue beach near neelankarai, my house is pretty close by. Welcome home when you have time.

gud to know this many tamil fm channels available :-)

wow! so many channels? here we have 2 stations; minnal.fm and thr raaga. minnal been around for a very long time and it was pretty boring to listen till raaga came to the picture. now, we get 2 radio stations trying to compete with each other. in the end, the listeners are the winners :P

I too love FM radio! Bangalore has got now more than 8 stations dude...anyway missing the hot tamil station like radio mirchi in chennai!

1) Can you tell me if I can listen to these stations via Internet.

2) Can you ask your friend to play some of the Blogswara songs. IF there are any formalities please let me know. It will be a great help. IF they can play all languages great..If not..Tamil songs are ok too.!!

nice post jeevan
even i like to listen to radio in the morning....
:)
i miss the "indur oru thagaval" that used to comein radio when i was a kid
:)

jeevan
radio has taken his place in our day to-day time...
it is one of the biggest source of entertainment...

glad to see you writing on various topics.I didn't get your phone number.[if that's what you have mentioned in the comment in vijayanagar blogspot.please carry on.
karthik amma

In my room i always tuned FM Radio,
they are great source of entertinment.

Karthik – I too know about the change:) I haven’t listen much to Big and Hello FM (except Reva’s show).

Priya – I also searched to listen through online to the Radios from chennai, but non stations are in online.

Phantom363 – Welcome here:) Thanks for reading my blogs. I am also serching for the online radios from chennai, let u know if I find any stations.

Queen – How are u doing? Thanks you Friend:) you are in Neelankaraiya, it’s a nice place know! Sure will try to visit ur house:)

Syam – even many media’s and industries have rights for Radios; I think it will increase soon:)

Amutha – these days there were 2 big FM’s Suryan and Mirchi, if the program was bore in suryan we change to Mirchi, now we can check 5 to 6 FM. I all those I like Radio Mirchi the most.

Nirek – Even the small towns in districts have local radio stations, I found if in my last kodaikanal visit. The Radio Mirchi is wonderful station.

Narayanan Venkitu – Thanks Friend. I am searching for the online stations of chennai FM’s, will tell u if I got any online FM’s on website. I also have been thinking about ur idea, I had sent her a mail, waiting for her replay. Let me tell u about playing the songs on FM.

Monu – only the morning and evening the radios are interesting to listen right. I feel bore to listen Radio’s when I was kid. Thanks dear:)

Mojindro – Ur right! Welcome here:) we also not getting time to listen CDs and Cassettes, radios are 24 hours giving nice songs.

Ponniyinselvan – Thanks:) I will send u my number later ma.

Ven – How are u ven? I play FM’s every day; the RJ’s speech was very nice to hear.

Prabhu – Waiting for her replay! Hope she will do her best.

yaa radios have brought major change no doubt!!!!I have a great passion for mirchi suchi!

i love radio - but some djs can be irritating hence i change between a few of my favs ;) i love listening to the night progs 12 - 2 am - beautiful selection of songs n totally no ads ;)

my favourite FM is Radio Mirchi! Man, they understand the pulse of Youth.

In suriyan Fm, though the anchors especially the ladies, speak as if they have just alighted from California University.. ..

Visith – In radio mirchi listening to RJ’s are very interesting.

Karthik B.S. – Every one likes the HOT!!

hey jeevan good job man do me a help we people all around the world are missing suryan fm radio mirchi and a lot radio channels... please quote me if they are online somwhere on the web... i tried a lot but not able to find any man... help out

I love to hear Radio Mirchi. Since i m n abroad and i couldnt find it online, i m missing a lot.

Hey Jeevan
Good effort !!!
Hats off to your confidence !!!
God bless you friend

Its a good news for the internet radio listeners, now you can listen your favourite internet radio through this web site, we provide unlimited music 24/7, so go a head click here to rock.....
Enjoy your music,
Thank you.