About an elder women 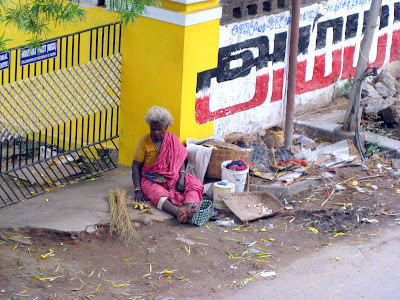 Misery and grief of great gran rule by our very moments in past and my presence of observing than nothing doing in silence view across this very old women right oppose our native home in Adyar. The rest in the balcony obviously make attending the elder women, who I know from my earlier; just thought at glance that she sits beside the street just like that and gets away certainly, but her stay extends now and then. Moments later I know from my cousin that she obtain that place, what make sure her baskets and few think left over. The space she occupies was someone’s gateway what mostly closed it partially, along my stay I noticed the kindly residing the house did nothing to try her get away or showing distress above the seizure. Anyone could easily get to a thought that she may be abandoned by her children, so she left to live on street and I was not interested to leave whatever as it is and I know she did bit more to her family in bulls maintaining.

Then later my cousin spoke that her family shifted to another place and sold there home. Not far away, this elder woman was taken along with them, later again she returned to the aboriginal ignoring her son’s haven and care. It was thought that me like more than staying with her son, she loved to be ground and sojourn aboriginal. I know there family where staying over about ours and known familiarly by elders; and there were former practice between them and our grandfather in bulls and milk profession. This was something felt me unusually and wonders where she lives independently in her own valor and does whatever she could to earn herself. Throughout my stay I saw her doing everyday some work and sweeping her own cloths; getting somewhere the coconut leaves to sharpen them to broomsticks, selling coconut slices and bananas. From the back at staying with family, she used to business with bananas, like else wandering around my area I see her to spread mat to sell the bananas roadside, which we never want to have, is as could easily go to waste basket.

This is a very thing I know a mother abandon her children for staying indigenous. Somehow the nativities help her at nights, giving her shelter for sleep and resting. She extends her life by the little things she gives up with energy and work; buys anything with sum she earns and except from helping families around in food and money. Nothing to see her in misery, and anyone could reach her may hesitate by her appearance that’s nothing more to her expressions and sometimes what she spells is miserable and I could see her blaming those helping her in there back, its unhappy to be and the courage at this age! Think she should be around eighty, was healthy to go wandering anywhere on her own. The things that grimy back the residence is her habit of bringing down the cow dung to public dustbin, from far away two streets her home and it was her son who drive the buffalos toward tea shop to sell milk at spot payment. It was something like until two year back or before we left our home it’s been a continuing process. Just coming across a friend blog about care on aged inspire me to write about this elder women. Out of the gray side, there is something the courage reveals from her.
Posted by Jeevan at 12:12 am

Yeah !!! @ times, Oldage is more to a second childhood as people call!! Is it the love and her sense of belongingness or her determination to be on her own! that made her stay alone. we never knew. !! But life is not easy for her either. But like evryone she tries to make the best out of life.. As S.Ramakrishnan tells, avragal anbai yassikirargal. They beg for love...

At old age we again become children. We must have some one to take care. So, by law of karma, we better take care of at least one or two old people when we are young.

I think ld people are mose at ease and feel a sense of belonging in the environment where they grew up in.to take them away to a new place is sad.

I shudder to think of old age ! And i wonder how i am treating my own parents.

Your article makes me reflect deep !

One side of me repects the old lady wishes to look after herself knowing that her family is close by if she needs them. This must give her two choices in her life instead of none.

It's her choice whether she stay on the street or stay with her family one day she may make the choice to go and stay with them.

My other side worries for her safety, but repects her choice and freedom.

God bless her and keep her safe until then.

Thank you for sharing my dear friend, Jeevan, ((Hug))

i wonder what goes through her mind, i really do. I see this situation alot everywhere. it doesnt localise to a country. its the gap of life, gap of understanding. i think its their ultimate sacrifice in letting their children lead a life of their own. or maybe not wanting the poisonous words of todays young ones hurt her.

ok I cried looking at that pic!!!!

it is indeed a different story.. guess her desire to live this way overshadowed her own kids.

The seeker – Beautiful said, who know what she seek and desire hop in her. I wish she enjoy the freedom and somewhere she live in protective.
Ramesh – there is nothing wrong in expectation, is there right looking from children those who must understand the need.

Starry – it’s easy to tell change, only those know the difficult in moving is it. The old people are more favorably to there belonging society and availability, I really see my grandparents are at this situation to keep away from moving towards us.

Kavi – hope you treat them well we know :)

Annie – well said. The long time journey of hers won’t stable within bounds I think, that make her move out. As your wishes happens to her. Thanks dear buddy :)

GP – That’s true, as every eye look sky the thinking remains different somewhere to all. In some families the love and care is little to get the children from there grandparents of those unlooked parents.

Keshi – Even the lives in suffering survives what we should see isn’t. hugss.