Let’s hope – the only thing to say 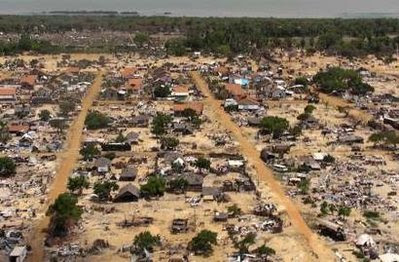 I don’t think anything much into seriously, but I can’t avoid thinking about the situation in Sri Lanka. I don’t feel regret for those searched there end, but to the innocent people brutally killed and those left in struggle to survive after conflict. While getting to bed last night, I shared my distress with dad that we’re comfortably sleeping here on bed, switched on to a/c to welfare; but there our fellow beings, in temporary shelters under threaten, suffering to injure with no basic facilities to relief pain and hearts without solace missing dear ones.

The contradictory information through media makes the situation uncertain and we have no other way than to believe whatever the Sri Lankan govt. says and promise on giving relief to the people affected by war and resettle them were they belong, within 6 months and creating equal rights soon. But still the true situation after conflict is not clearly defined; and what bothers me much is does war really end and like some people says that still army target innocent Tamils after clearing the terrorists?

I wonder sometime do Sri Lankan people have ever worried about the war in their soil where thousands of innocent Tamils killed brutally. I agree their celebration for the death of LTTE chief, who was a big threaten to there lives but I also condemn their celebration, because it hurts to see them celebrating where thousands of innocent people killed and still suffer to get them freedom from terrorism. The Lankan words gives hope to ears that all evils are cleared and there was a course of action on restoration and giving back their rights, but it hardly touches the heart to get solace.

Now we need to know what’s happening on the late war front zones and how people are treated at displacement camps, and it seems journalists are denied to report and capture the true situation. It’s important to know what causes our patient and pain these days exist for and what the bloodsheds worth being? I wish at least now let the army be human and serve ‘Tamil’ people with dignity towards any cause that brings comfort and peace. Sure it’s an easy thing to say from here, having the right to express and comfort of living, but we can’t even stand from there. At least we can try to understand from them, what’s being struggled to live and survive from an uncertain circumstance means.

Ban warned ‘history could repeat itself’ if the grievance of Tamils weren’t addressed.
Posted by Jeevan at 3:57 am

I think we should all pray for peace and living in harmony.

After all, we are humans. One race. And this is our planet. For every one of us...

I hope people see the light of this !

ur right Jeevan. I dunno what ppl r CELEBRATING right now. ppl should REMEMBER. As I said in my post last week.

The bloodbath is hopefully over. I want both Tamils n Sinhalese to reconcile, ATLEAST now!

I think it is survival of the fittest...:)

I think it is survival of the fittest...:)

Jeevan, i think while Hope is what we all do...its source of worry also...

and if someone's wish turns out to be another's worry...its better left like that for God to act!

God has his most rightful solutions...why do we worry! :)

With the LTTE out of the way, thanks to the continued efforts of the Sri Lankan Army, one hopes for peace and prosperity to come to the land!

I personally hope that the government there helps rehabilitation of a society which is inclusive of all communities!

We must never think to serious,
its not good.
Thanks for the story,
but its the reality in
Sri Lanka...........
There is enough misery in the world,
we must have all make the best of our life ;)
We need some more positive thinking,
and laugh more.......

I just hope that SL govt is honest with their promises, we will only know after 6months that is when they resettle refuges in camps after screening them.

i still feel it will be a miracle if the sinhalese ever accepts the Tamils equally.

Innocent souls like you think on humanity. I am also innocent like you. But the world is also going on the other side. People like us are very behind. Very disgusting with the way things happening on this earth. I wanted to write on this a lot. The more I read, I become more depressed. Where is this world leading to? Humanity is dying.