Up and down of denominations

Unexpected happens everywhere and if it was the result of president election in USA, India loses the value of high priced currencies (500 and 1000 rupee notes) all of sudden from the midnight of November 8th. Though it is indeed a bold step by the government of India and an essential one to knock down the black money and illegal notes circulation, the release of 2000 notes make sense it could worsen the situation in future with chances of double the hoarding. In the age of online transaction and swiping technology we don’t need high denomination and most of them were used mostly by upper class and I also think it could increase the spending habit indirectly as wander for change is not easy.

We all know it’s a temporary state of trouble (shops refusing to get value lost denominations and people rushing to banks and ATMs to exchange or deposit their hold) and this change could be nothing in few weeks when more new 500 and 2000 notes becomes stably available. I think it’s the media created perplex, because the way they conveyed the message comes shocking and it was unbelievable too first. Though we appreciate the crucial and bold decision taken by the govt. of India, the difficulties could not hide away esp. those who get wage and small scale investors hit by this move greatly. Govt. announced certain areas (like milk parlour, petrol and railway stations) where the old denomination can be exchanged by purchasing, but people had no option when they refused to accept to only postpone or go pillar to pillar in search of change. 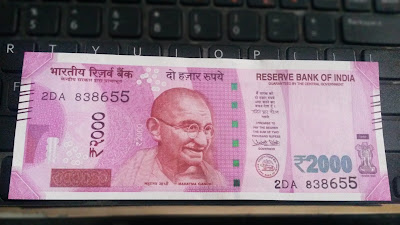 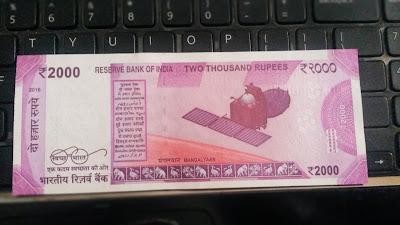 The new ₹ 2000 note really left me amaze by the number of detail it hold within to keep away fake printing. My dad bought a 2000 note yesterday after depositing an amount in bank and I was curious checking its features and I really liked the Braille work to assist visually impaired. It has intaglio or raised printing of Mahatma Gandhi, Ashoka Pillar emblem, seven angular bleed lines (on left and right side of the magenta coloured note, size in 66x166 mm) and identity mark.  Apart see-through numeral 2000, micro letters (RBI and 2000) on the left side of the banknote, it has windowed security thread with color shifts, where the thread changes from green to blue when the note is tilted.


We have more than a month to deposit or exchange our old currencies (and even beyond that with RBI), but people seem impatient in changing the notes as if today is the last date.  I don’t believe this (giving re-life to denominations in new form and price higher than before) will turn everything, but I do hope alike it helps, improves and betterment the society and banking system. Hard-earned should never go wasted.
Posted by Jeevan at 6:25 am

the us has been re-designing its currency for a few years, now. it is amazing the detail work, the inks, papers, watermarks, etc. used to prevent counterfeiting.

I heard about this change.
Hope all goes smoothly.
Have a Happy Weekend, Jeevan!
Peace :)

Hi Jeevan. I agreed with your thought but you are lucky you atleast see the new currency. In my city i am still not able to see it coz banks are giving 10 Rupees note yes 10 rupees in return of 500 and 1000 rupees note... :)

Banks and ATMs should have been supplied with adequate new currencies before implementing this scheme in such a large-scale. The execution could have been planned better. I appreciate the detailing in the new currency.

You are right about the impatience in the people.

Here in Punjab/Haryana, people first go to stand all day in lines, and then blame any and everything. I hope the situation will improve after a week or so.

I followed the news about your country's new currency to curb the terrorism and fake money floating around. I was indeed surprised and amazed by the brilliant idea of planning it way ahead in tightest secrecy.

Last few days have been chaos..and media is doing a disgusting job of creating panic and doomsday kind of hysteria among the common man. Only time will tell if this cancer called 'black money'can be eradicated fully. I just hope it does...

We always feel very insecure with any change..so people are in a hurry for deposit and withdrawl both..there is enough time to deposit and we should initially withdraw minimum amount, so that everybody gets it.

This is a very good move to curb the finance of terrorists and black money menace.

I think that we forget in the US how the things we do affects the rest of the world.