Jack Fell into a Well

One of the three street dogs my brother taking care of fell into an apartment well in the backstreet this evening when two of the three went playing around. There was totally fived dogs gave birth by another street dog and my brother fed them all, where among two was killed in a street accident (a year back) and one was adopted by my cousin sister and other two by my brother. Now, as we moved close by a door next the three dogs continue to enjoy their company and were all fed almost together. Though it annoys sometime and has created lot troubles early, they all settled well around now and get used to the balconies and terrace above our home. Ours is a three storey residential building and we reside at the first floor and adjacent to us was my cousins so we let them take space at their own comfort except coming into the home. In day time they roam on streets and come home only for night sleeps and naps. 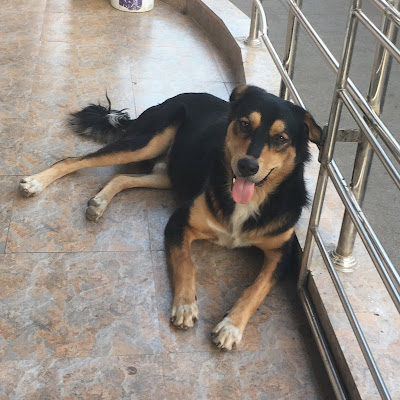 Coming to post, the dog Jack (in photo above) fell into the well when it went on top of a net covered well, at an old apartment complex in the backstreet. The apartment walls are very low and anyone can leap into the apartment and the two dogs (Jack and Black) went playing around there and the rusted well net couldn’t hold the Jack’s weight and it fell into the well. Glad there was two to three feet of water in the well and the Jack safely landed on the water and hold to the wall with its back legs pedalling and the Black continued to stay back barking at the well, signalled the people about the fall. Three little kids ran to our house informing us and my bro has been out then, so on information he rushed to the spot and my cousin and his friends brought a rope ladder on rent and Jack was rescued safely by my brother who climbed down a nearly 20 feet well.  Jack has climbed on his shoulder as soon he gets down, perhaps he must have scared enough.  Jack is a hefty dog and climbing the rope ladder along with him isn’t an easy task but my brother’s attachment with them made possible.

At this place I remember the nursery rhyme – Jack and Jill… to fetch a pail of water… from the well up the hill and Jack fell down… here the Jack fell inside the well rather down the hill! Jack is a calm dog and much responsible among the other dogs and never been rude or threatening but his bodily and furry look may create panic to by passers. Jack brought its features from her mother whom I guess was a cross of Himalayan Sheep Dog because Jack resembles the look of the breed. Glad he was rescued and I hope he won’t go there again.
Posted by Jeevan at 10:56 am

I am so glad that he could get him back up out of the web. The dogs seem to be everybody’s pets.

Jack is one luchy dog, hopefully he has learned a lesson.

A story with a happy ending. Good thing the water is only about 2 to 3 feet. So glad that your brother is able to rescue Jack from the well.

It's really a scary situation. Well, it ended on a happy note!

The one in the image is perhaps Black.

Oh wow, what a story. I am glad Jack was rescued. Happy Monday, enjoy your day! Wishing you a great new week ahead!

Happy Days to you,
A ShutterBug Explores,
aka (A Creative Harbor)

Oh my goodness - so happy it ended well.

I'm glad Jack was safely rescued from the well, and I hope the well has now been properly covered so that no one falls in.

Your brother is the great saviour! Bless him and Jack.