There are very few films share our personal views and things we thought could be right if the outcome was this manner. Appa’s subject is very close to my heart and what I really thought how a parenting should be has been highlighted in this Tamil flick Appa. What a feel it was to watch a father son related movie along with your father? Actually I didn’t feel anything wonder (as i went with my father and bro to watch) but the scrip does enough and what it delivered is best. 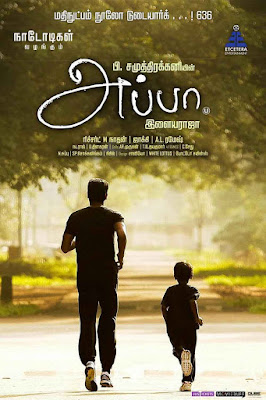 Though it is a father son/daughter relationship subject, the objective has been parenting and the movie exhibits a model where the child was himself rather following the serious modes and being a replica of others. Directed and acted by Samuthirakani, the film deals with three different kind of parenting and the outcome of the children and parents reaction make it worth watching and also   entertaining.

Samuthirakani has played an ideal role model of a father, who wants to bring up his child with individuality and morality rather forcing him into certain kind of pressure the other children go through. Right opp. to him, his wife, being an arrogant and comparative person, wants her son to do what all other kids do instead of concerning his real needs and deeds. The parents were separated and the boy grows on his father’s guidance as a confidant, friendly and cheerful young man.

On the other hand, Thambi Ramaiya is as a strict father who dominates his son’s life and wants him always to be topper in academic. Being an anti-Samuthirakani he keeps his son away from them and later put him into a residential school against his wish. The third one doesn’t come into either category and with a son of retarded growth wasn’t encouraged or disregarded, but the short guy was the real show stealer.

After a gap of two years or so, Samuthirakani has took the Saattai (whip) in hand once again to drive away the force that implemented on children in name of education, supervision, suspicion and authoritarian. In Saattai(Samuthirakani’s previous movie), as a teacher, he took reform in education system and function of school and in Appa, he took a step further exhibiting certain kind of attitudes from the parents side to observe and put right  things.

I believe not everyone would get a father like the Samuthirakani’s character in the movie, because the way he handled his teenage son’s confused state of meeting with a girl and facilitates his discomfort feeling when he understand his unfamiliarity towards the opposite sex is absolutely wonderful and best ever expressed. I don’t think any father or mother would discuss the children about the things happen during the teen, like the film emphasis, because this is the phase decides ones behavior pattern and if it wasn’t designed properly the incidents against the women are impossible to avoid.

Appa carries message on the shoulder which is apt to the current leading society and the movie is a testimony to the misconception happening in the education and children’s growth. Vignesh (the one played as elder brother in Kaaka Muttai) as son of Kani expressed smart and intelligence, although being an average student his character is quite impressive. Mailvagam (Nasath), the child with retarded growth, is one of the best aspects of the movie and his every move is noteworthy and amusing.


Thambi Ramayai has continued his role from a teacher (in Saattai) to parent in Appa with same frustration, and has proved his ability in twisting his character in the rear end. The boy acted as his son expressed almost everything on his face and the two girls as their friends has given their best. The movie doesn’t have songs (though music by Ilaiyaraja) and also I couldn’t remember the one what lyrics, because Samuthirakani’s dialogues have saturated. It’s a movie for everyone to be must watched.
Posted by Jeevan at 5:27 am

I am going to watch this movie. Wanted to watch Amma Kankku also. Somehow missed.

I generally don't like movies that 'advice' but after reading your review, I am encouraged to see this movie. I'll try.

Hello Jeevan!! Sounds like a great movie :) thank you for the review.

Great review of the movie. Interesting.

Your review is good. Will watch the movie...

The movie sounds wonderful from the way you have described it. I would so love to watch this one!

Enticed enough to look for this movie and watch it.Its always a pleasure to come here and get inspired by your world Jeevan.I love the style of writing since you take every detail into consideration.Keep writing and may God bless you always.