The national highways has never been my favourite to look forward to ride and it has anything cheerful to keep up the ride as most of the stretches goes bare and bore, only the skies comes to rescue. We get to see different skies and patterns as we kept moving esp. on the highways, the change was constant and the sky wasn’t same anywhere and here I share some sky shots that I took while riding on the highways for the family vacation to Kodaikanal. 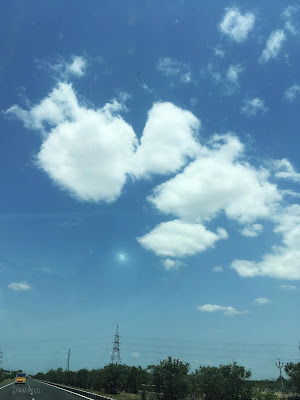 The sky wasn’t much interesting to shoot this time but was better with puffy clouds floating across the blue-sky only after riding more than 100km outskirt of Chennai. These were shot between Villupuram to Trichy highway and there are few more to share another day. 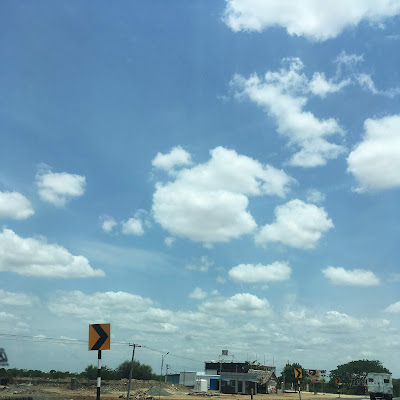 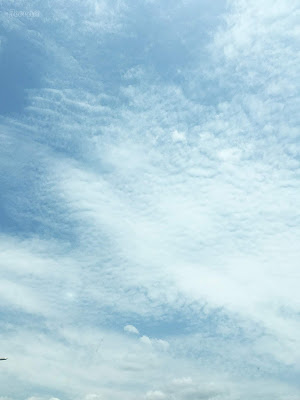 Linking this post with Skywatch Friday
Posted by Jeevan at 6:47 am 6 comments:

Family Vacation 2019 Ups and Down!

Don’t know why the vacation wasn’t exciting or to say there was something missed feeling throughout the stay but travel wise I enjoyed the trip and spending time in lap of mountains in company of birds and trees. It’s always a pleasure to stay at Smokey Haven, my uncle’s woodhouse and cottages at Thandikudi near Kodaikanal, where we spent our days with extended families from July 8 to 13. Since the inauguration of the resort in 2015, I continue to visit it at least once a year and I’m happy and thanks to my uncle for executing a project alike i.e. building a woodhouse in the vicinity of coffee estate and tall big trees helps me staying and enjoy an environment full of nature rich.  Anytime there would be a bird chirping outside but this time I felt a bit lesser sound of the birds and spotting birds has reduced too what I perhaps guess was migration! I know there are some little birds that migrate from Himalayas and it was the environment that console me lot as I felt down sometime.
Though we waked up early and began the journey, the most part of traveling (490km) went under scorching weather until climbing up the hill. Our car couldn’t produce enough cooling to the cabin, though we serviced the car before traveling it quite went out of gas when we switched on the AC on the return journey. We travelled in two cars and our 9 seater was occupied by 5 of us with boot space quite went for wheelchair, commode and luggage and the uncle’s Innova had other five since my uncle’s family was ahead of us in another car. Though we travelled together they speed up always leaving us far behind as we drive on moderate speed to help me balanced.  While traveling at two different speeds doesn’t bother me much unlike how it continues at the vacation period as well.  My uncle had built an additional woodhouse at their vicinity at a ground below the already exists, were all others stayed and we 5 including the grandmother stayed at the old woodhouse. It wasn’t the old or new mattered, but none came above to spare time with us and it felt like we came alone like how we travel last time to the same place.

I was irritated lot to sit alone always, even though nature gives me company I felt lonely when all my dear ones were around not sharing. I haven’t felt this before while travelled as five and I would sit ideal watching birds and taking photos as it was my choice and nature of traveling, but as a family vacation mind thoughts about being together, sharing and having fun rather think about anything. I love exploring places and traveling but love double folds the family vacation or group traveling at least once a year to keep cherished throughout. As soon we come into the range of Thandikudi we all lost our Airtel network signal and I actually thought that it could be a mild fault in connecting, but the disappointment came hearing that Airtel network has stopped working there due to fall of tower! I know I haven’t gone there for networking and it didn’t bother me actually, instead only made feel happy that none will be looking into the smartphones so there would be more chances for sharing face-to-face but my cousins had another network to still connect and also hopping on and off in jeep.

Though we expected rain in the mountains, as monsoon already began, the first two days restricted us to woodhouse and we got to the Balamurugan temple one morning and then to another woodhouse my uncle had built on behalf his friend and one day spent driving to Kodaikanal and Kookal Lake/Village. We hear people complaining of no rain until we got there and it was obvious wherever we visited except in Kodaikanal where the lake was at its brim! The Kookal Lake was muddy with water at the bottom where only water hens were walking in and out. The weather was much colder in Kodaikanal, even though clouds form as if it going to rain it didn’t happen until we move to the woodhouse. One night we spent at my uncle’s friend woodhouse (which my uncle built on behalf his friend) in a place called Vel Farms, a place deep inside the woods and remote from much activity. Overall I had good time despite the lack of sharing and feeling alone while being together as well, it was refreshing and relieving to travel after more than a year and I could cherish this for some time until I pick up another trip.

More details and photos will follow in further posts.
Posted by Jeevan at 9:44 am 12 comments:

My Travel and Better Health

After a long time or more than a year, I’m getting an opportunity to travel and this’s a long gap I had after traveling become a passion. I should have taken a trip early this year but people had different plans which are unavoidable and needn’t be as each phase has its significances that need to be addressed. Being dependent it’s impossible to think or work beyond the limits. Dad’s post coronary issue (though it was addressed through stents and he leads normally) things turned worse in my life as he should not lift me anymore and mom as same following her uterus removal last year, I’m looked after by my brother and cousin bro for shifting my positions has become a problem to pick up a trip on own. Till the end of last year, dad could put me inside the car and we would take short-distance rides but now I had to look out for my brother to lift me inside the car and ours being an SUV only for him is possible.

Following dad’s angioplasty in December, we didn’t think of traveling for few months and in March brother started working on his Fitness Centre aka GYM which was opened on 8th May and sister’s wedding arrangements in June pushed our travel plans further. Even now the brother is a bit busy making new clients to the gym will be taking off few days for a family vacation at my uncle’s woodhouse (Smokey Haven Woodhouse) in mountains of Kodaikanal. Last week I checked with my cardiologist and it was a surprise and happy moment for the doctors at the clinic to find my heart pumps normal or normal LV function (55% to 65%) which was 37% last year when diagnosed with an echocardiogram. A yearlong on medication had helped me achieve this stage and the doctor was content with the result has reduced the medication and my next appointment are only after 6 months.

Following a sign of abnormal in ECG, last year May, I consulted the cardiologist and he found a weak heart or less percentage of LV function.  Though the heart getting weaker is a normal condition in the progress of muscular dystrophy, it was quite an unexpected drop for me as of 2016 echocardiogram my heart function was normal, and 2018 report of different. The doctor prescribed me few tablets and hope to sustain the condition with constant medication was cheerful about the incredible improvement of the condition and happily deducted few medicines. I’m already taking regular medicines for diabetes along with calcium and vitamin tablets to support the system and this improvement with the heart has helped a bit. The family vacation we planned for next week, with near and dear ones, is the one going to happen after three years, even though I use to visit Kodaikanal yearly as a family to relax and a little bit of exploring, I hope to have some fun with my first circle families. Only my newlywed sister is missing the trip as her in-law isn’t well.  We would be staying at the woodhouse and visit the princess of hill station – Kodai.
Posted by Jeevan at 7:03 am 12 comments: 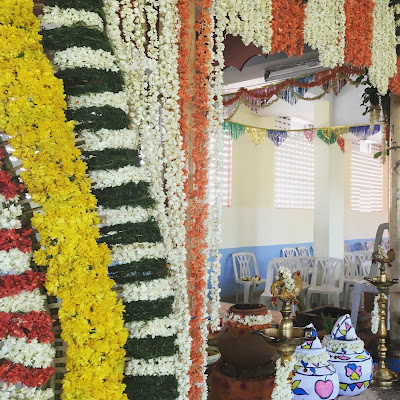 A simple colorful stage decor at sister's marriage last month. It was in between the floral decor and traditional pots and lamps the marriage ceremony was happened.
Posted by Jeevan at 10:21 am 11 comments: