On house shifting mode... will blog very soon. Wifi cut off and I’m not comfort with mobile blogging. See u soon
Posted by Jeevan at 4:28 am 5 comments:

Smartphones rules is what everyone would accept all-round. There’s lot of benefits using smartphones and it’s almost a pocket computer connected with internet, which means reaching every nook and corners of the world. But at same time there are many addicted to the device which means of killing themselves if they lost or someone prevent them from using smartphones. Though everyone beyond age difference uses smartphones, the young girls are so much attached to the gadgets where even they would drop their boyfriends but not their smartphones. I read news in paper where a marriage has been cancelled in Uttar Pradesh, when the bridegroom family learns that the bride is addicted to Whatsapp and was always online, sending messages nonstop to their family members. Additional news I read today was a judge at Jharkhand court has investigated a case through Whatsapp, for what the Supreme Court has condemn. 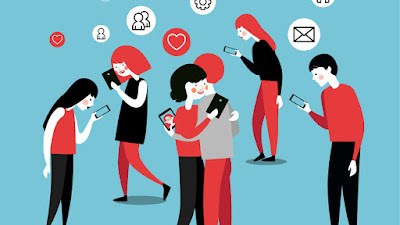 I think the smartphones and social networking is overrunning its need and we are out of touch from the real caress and brush. I feel our basic sense is challenged as we continue to rely on smartphones; our relationships are affected to a state of broke down. There’s a woman works as a housemaid at the neighbour’s house and she often brings her daughter along to perhaps help her and she looks like someone in her late teen and school dropped, held the phone always in her ear. Sometime she was loud talking passing our home and was also bold in uttering words that most would hold secret. There’s a young lady at the opposite house who used to keep talking once entered a call and go on walking the street until she end the call. She used to sit outside her home in evenings with mobile while her son plays around she keep doing messaging with an eye around. There’s another young mother in neighbour’s house who do the same whenever seen but from an iPad, which almost cover her side face. And I really wonder how she holds that size always in hand and up to the ear.

As I talk about others, I couldn’t give a miss to one of my cousin who’s always on her smartphone.  She keeps away her mobile is pretty rare and sometime use it even while at charge. Her mobile frequently beep with message notifications and she’s couldn’t do anything or look tense until checkout what’s up. I know two ladies who’re always on smartphone. Though we are friends in Facebook, they the sis-in-laws of my maternal aunt is so much used to smartphones and one of them is intense where she continues to share whatever forwarded to her. Other day the both came to our house to invite for one of their newly built home, where I noticed they don’t let down their mobiles. Both aged above 50, their devotion to smartphone is really wondering. I too use smartphone and more lately but I’m not a kind or influenced by the smartphone to keep on checking. There are days I unchecked the phone and I’m not an instant responder to any notification or message. Perhaps my online friends circle is small and mostly built on blog friends; I don’t get frequent messages and updates that much. There’s another cousin of mine who used to hang on mobile and he also carry a power bank along! I may sound complaining and I know that everyone’s part of this company but overworking may result in some other way unhealthy and we should make certain the smartphones doesn’t overrun our intelligence or make feel numb.
Posted by Jeevan at 3:23 am 14 comments:

In last two months or to say from the time begin the renovation work of our own house; we are facing lot of frustration. I should have been blogging from our house (from where I begin blogging 13 years ago) by this time if things worked as planned. But no one worked reliable for us and whoever started the work didn’t stand even up to midway and we had to lookout for new labours from time to time to follow to complete the former’s work. Was it civil, electrical, and plumbing or carpentry we had to deal from 2-3 different set of workers to bring the renovation work to the finishing stage of now, and we had planned to move within next week.

As we hadn’t been in touch with civil works for long time, we had to rely on new labours that our friends and relatives recommend.  Some of the labours had cheating mind-set and their only intention was to delay the work and get daily wage. So far I know only civil workers work on daily wage and electrician, plumber and carpenters was paid according to the work they do. We had a reliable plumber come electrician, where we hadn’t need to be presented on the site and he knew what to do and do things neat and thoughtful. Unfortunately we couldn’t bring him into the renovation work, which might partially relieved us. There wasn’t much work at the home for plumber but the first one took 9-10 days completing only 40 per cent of work by taking daily wages. And he was the worst among other.

For electrical work, each stage was completed by different set of workers. The piping was done by one and wiring by another set and fixing of switches and other electrical devices is yet to be done by another. The carpenter is a lazy goose and he has his own timing which he himself unknown. He put us hold even for 2-3 days after we call and his laziness is exhibited through the look itself which isn’t possible with all. We haven’t thought we had to rework the interior entirely and re-flooring with tiles is another stage we had to rely on two set of different workers, one evaluated for tiles and other relayed the floor. No one completes their task fully and we had to depend on another to finish. I really wonder how they could be such irresponsible and senseless and continue to sustain in their jobs. Each day held up for a sense of irritation and frustration for us, the labours were trustworthy in their words at beginning but very soon break the walls they built.

I know relying on someone strange is impossible but we can’t lead keeping away the reliance on anybody. Frustration is although common at these places when long-time relationships and reliance do fail at times but this continuation for weeks do bother at large at peace. Sometime it feels money isn’t a matter and even we could endure the injustice for the amount we afford but reliance is something built beyond materialistic and what’s happening with the renovation is perfidious that delays time and waste of energy. Though everything comes to a conclusion now, the lessons we learned will do really help in future or at least keep away from the civil work related to experience similar. I know not all come into the category of unreliable but we can’t do anything unless we encounter or experience.
Posted by Jeevan at 10:22 am 11 comments: 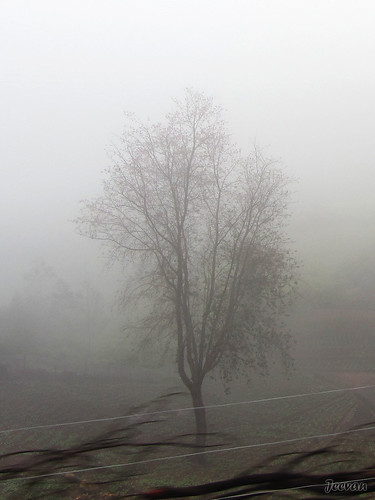 P.s. Haiku inspired by the tree snapped through the mist when traveling on the countryside of
Kodaikanal.
Posted by Jeevan at 8:32 am 13 comments:

in absence of dear one
she long for a strong grasp
to keep her warm enough.

Standing alone
along the window’s pane
she let some light radiate warmth
until the night turn back too cold.

Staring out the window
thinking of him and the night
despite the sweater she worn
heart wants him up close tonight.

To cuddle up in warmth
to burn the heat that ignites
rising up at the moment’s touch
life becomes bliss.
Posted by Jeevan at 8:43 am 9 comments: