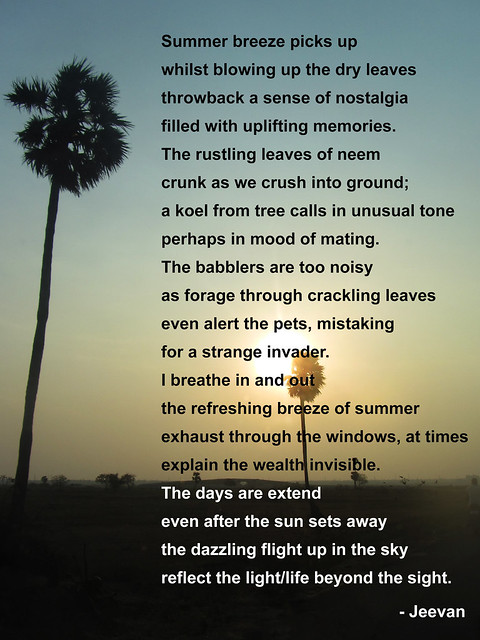 P.s. The background image was shot around Nemeli in ECR (east coast road) during an evening.
Posted by Jeevan at 3:25 am 10 comments:

Following Delhi Gate, our next halt was at Pancha Pandava Hill Cave and Rock Sculptures at a small town called Vilapakkam, about 6 km travel on state highway 129 from Arcot towards Kannamangalam. About 25 km from Vellore, the hilly area was a flourishing Jain centre between 9th and 11th centuries which is evident from the inscriptions and Jain figures found on the caves here.

The name Pancha Pandava Hill is associated with Pandavas from Mahabharath, although the hill is locally called as Tiruppanmalai meaning scared milk hill. The rock cut cave temple is a large excavation, carved on the eastern side of the huge hillock. We couldn’t get close to the rock cut cave due to the development work and pavement building, but my mom managed to capture few shots on the face of cave from a distance.

Built in Pallava style, the cave has a large mukhamandapa or hall supported by twelve pillars in two rows, but in picture above only the front pillars is visible. The pillars are uniformly square from top to bottom and have curved corbels above the pillars and pilasters, which is another style mostly seen in Mahendra caves. Except seven niches carved on the back wall of the cave is empty cells with square uncarved blocks as side walls.

Situated right beside the road, the hill and cave is hard to miss and the site is protected by fence on roadside with two small gate entrances. Apart the cave, there’s a natural cavern atop the hill which is converted into a tarn by the construction of a retaining wall and rest is turned into mosque that seem to attract local people for worship.  The staircase to the mosque is carved on rocks and at some places arranged with rocks.

The rock cave and sculptures is protected by archaeological survey of India. And the development process right now hopes to attract more people to the site and make access easily, which perhaps get me closer if checked later.

Linking this post for  Good Fences by Gosia
Posted by Jeevan at 3:48 am 13 comments: 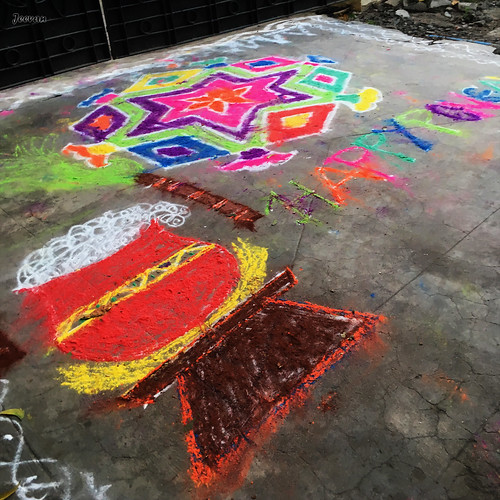 One of the neighbour’s colourful Kolam drawn for the Pongal festival. I really liked the way they created a Pongal pot boiling over the firewood stove aside their colorful Kolam and I took this shot  in evening while  coming around our street and the Kolam should have perhaps drawn in the morning to look little  distorted.

I wanted to check some places around Vellore and was planning from December to do the same but for some reasons it kept postponed. Finally on Sunday we made a trip.  Vellore is usually known for hot weather, due of the rocky terrain and hills surrounding the city, I don’t want to be burned visiting it rather than in winter or rainy (beginning from Oct to Jan) though the summer haven’t  kick started yet, we could feel the hot enough. 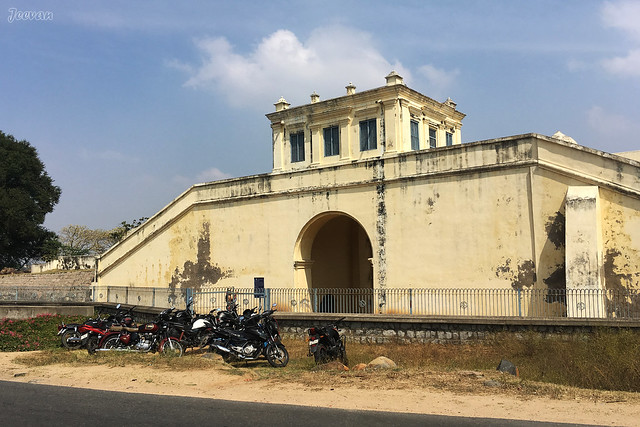 Our first stop was at Delhi Gate, near Arcot on the bank of river Palar. Delhi Gate is part of the fortification of Arcot, a region that has been battle ground for number of times, which result in construction of the fortress around Arcot. There were prolonged disputes between different dynasties fighting for the control of Arcot, also inspired the British and the French, however their battle was only for control of south India, the battle fought by the British using handful troops and Indian solders under the leadership of Robert Clive (to capture the Arcot) was claimed to be a remarkable battle in Indian history.

What’s really amazing about this battle was, Robet Clive, a clerk, who did not have any military experience and along with 8 inexperienced officers, won the battle against enormous forces using the strategies rather than his strength. The Siege of Arcot lasted fifty days beginning from Sep. 23, 1751 CE become a turning point in his life and later rise to become the Governor General of India. And he laid the foundation of the British Empire in India and ruled most of the country as the governor general.

Now, except the Delhi Gate, a gateway structure with a room atop and some ruined fortified walls and basement shattered around, there isn’t a trace for fort, or perhaps some other ruined parts may visible around the Arcot. The fort originally built by Mughal governor, Daud Khan Panni, in early 18th century was destroyed by Tippu Sultan in 1783. And one of the remaining gates of the fort, called Delhi Gate, was named after to signify the beginning of the capture of Delhi by the British and the room atop the ached gate was the room of Robert Clive. 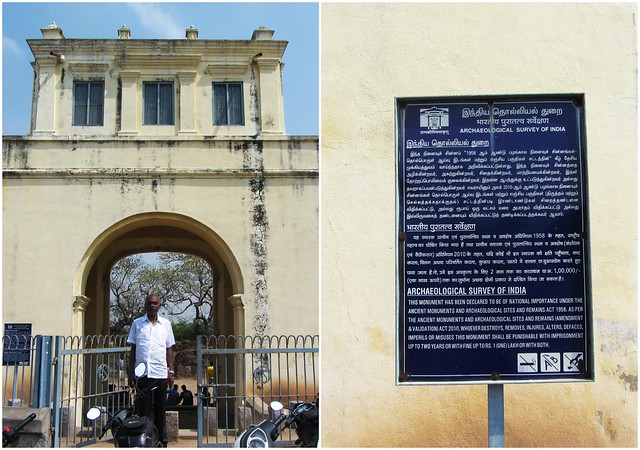 It was about 11 am when reached the Delhi Gate, but I didn’t get into the fort, which was fenced on the road side and have huge steps to climb in out. During the time of visit many youngsters were playing cricket between the gate and ruined fort walls, against the warning board place by the ASI   instructing that misusing the monument shall be punishable with imprisonment.   The Delhi gate has two storerooms inside the archway and two staircases, from outside leads to the room atop the gate. Locals believe there’s a tunnel from here goes up to Delhi and thus named after it, but it’s unproven. 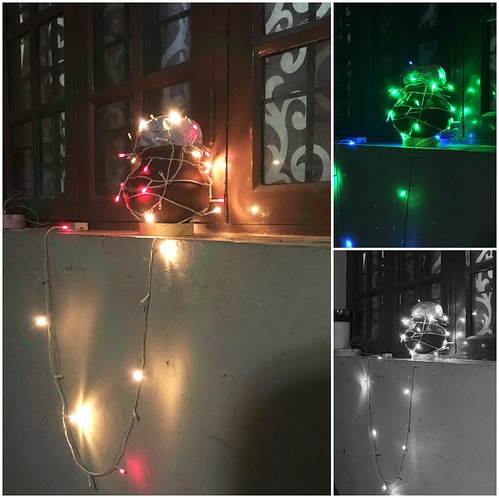 During the Pongal festival I was thinking to do something different and got the idea of putting led lights on an old Pongal pot. It was the same serial light I used on the Christmas tree, and I put the rice led around the pot and cut pasted cello tapes here and there to keep the wire on place. For the overflowing part of the pot, I blocked the mouth of the pot with a bunch of white paper and stick lights around it. 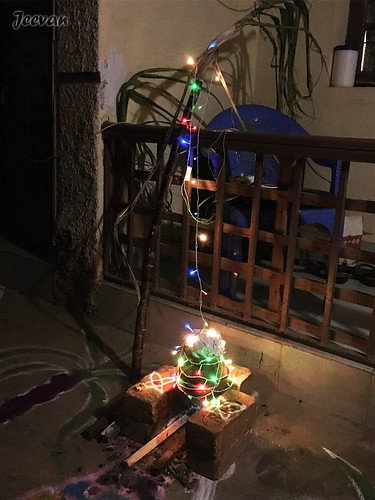 First I placed it on the windowsill outside the home and then shifted it to the brick stove, that we used to make Pongal in morning with firewood at the courtyard. And it looked really good lighting from the shutdown brick stove and we left it that way for the four days of Pongal festival and people passing by the road too would have got a glimpse.

Linking this post for  Good Fences by Gosia... and you could see our sitout fence/rai in picture above
Posted by Jeevan at 6:29 am 12 comments: 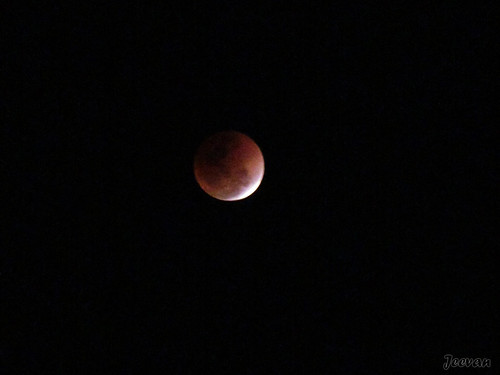 Since I know that lunar eclipse is happening at the evening of Jan 31st I decided not to miss the event and go to the beach to watch the moon across the vast sky and capture the best I could.  Likewise we checked the shoreline by 6pm and there wasn’t a sign of rising moon and the sudden clouds were covered up as well. Thinking that we aren’t chanced to witness the spectacle, went on a short ride on ECR and even checked the Uthandi beach but still couldn’t seen the moon.  At last taking a U-turn before the tollgate, received a call from cousin have we watching the super blue blood moon swallowed by the shadow of earth? We rushed to the Palavakkam beach and the moon was almost up in the sky and masked in red shade. 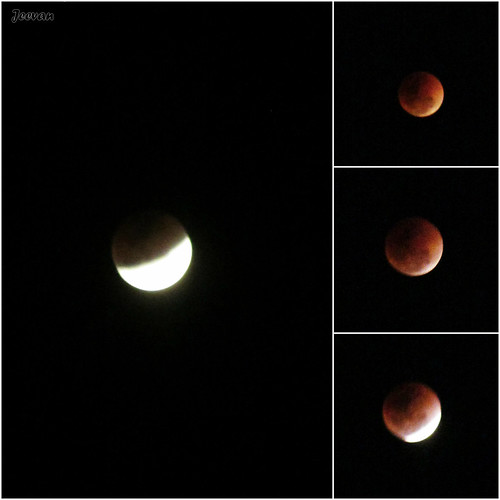 I actually wanted to watch the entire show (from the moon rising above the sea) but wondered what happened in middle, we could only watch the unveiling show of the moon. I captured the moon from inside the car, through the windshield I couldn’t get enough detail but I was content with the night mode I used on the moon. Though I wasn’t comfort on the position of shoot, as I captured from the sedan (car) seat that had little access for me to use the camera, I was happy with the angle of moon which only made way for shoot. Being a SUV guy, for last 9 years, with high seating position, shooting with camera was somehow comfort but the sedan’s low seat wasn’t favourable to shoot. 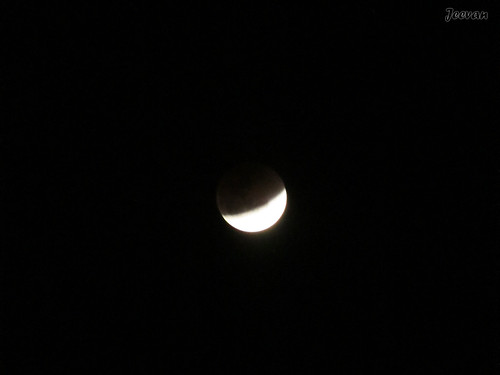 My brother has bought a Volkswagen Vento and he wants to take us out and with a natural event ahead we decided to give a shot. The car gives pleasant ride and soothes even on rough roads, but the only problem was, being a low seating position the ingress and egress was very difficult and taking photos too become trouble. We still have the SUV and were seriously looking for a MPV to turn it into a wheelchair accessible where I could travel without transfer into the car seat. Hope you liked the photos on the moon.
Posted by Jeevan at 9:36 am 13 comments: