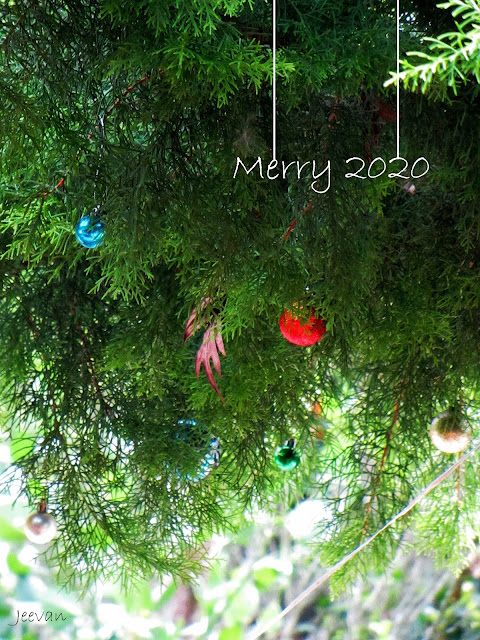 
P.s. Hope you find the red, green and blue ornaments hung from a live christmas tree grown in the courtyard of my uncle's woodhouse at Thandikudi, near Kodaikanal. I capture the image from my last vacation in July and the ornaments weren't removed from the tree after festive season was over, but I loved seeing them pretty hung through the evergreen tree. Wishing you all Very Happy, Peaceful and Prosperous Pretty New Year, 2020!
Posted by Jeevan at 8:12 am 7 comments:

The sun was brilliantly shone over the sky and it was dazzling to even to take a glance at it and so I was out of focus with the camera tried to capture the phenomenon. It was blank and blur whatever way I tried to shoot the occurrence of Annular Solar eclipse in point and shoot, but after many a try I got the eclipse reflected through the rays of sun itself. Around 9am on Thursday, the sun rose to an uncomfortable angle what become difficult for me to capture the eclipse but got to watch the partial annular through the solar viewer, my cousin bought from the Elliot’s beach, where people in neighbourhood thronged to watch the eclipse. 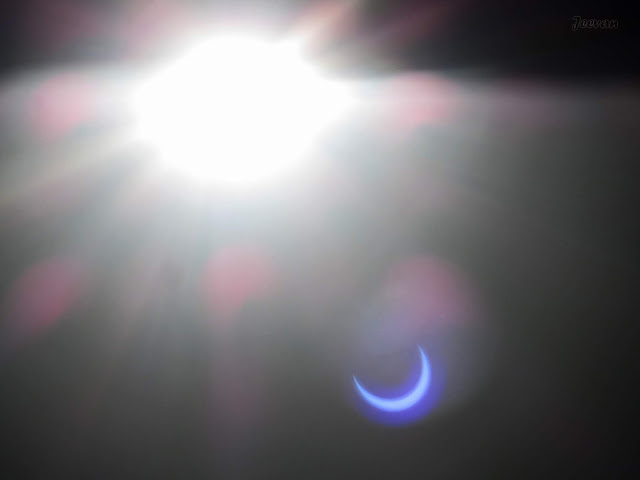 The reflection of the partial annular (the crescent shaped   blue in picture above) was a real surprise for me as I was feeling disappointed that I unable to capture the eclipse. Though I know it wasn’t easy to shoot the solar eclipse normally to anyone but I find the reflection amazed. The annularity was visible from the East Mediterranean to south East Asia and gladly the annular travelled through the centre of Tamil Nadu and Kerala where the ring visible quite.

Linking this post with Skywatch Friday
Posted by Jeevan at 7:19 am 11 comments: 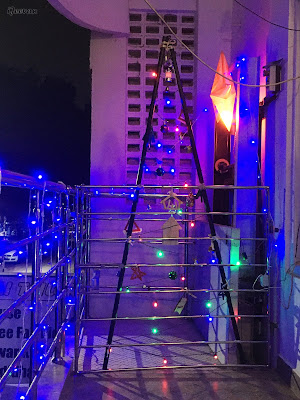 My simple Christmas tree and light decoration on the balcony! I really don’t want to decorate the Christmas tree this year but got an idea later to simply tie two poles in shape of cone in the gate and put lights around it and hung some ornaments and items I made with Popsicle sticks from last year. I tried this for a change from the regular Christmas tree. I put blue colour led serial lights on the balcony rail so it over exposed the other colours lights on the tree setting. 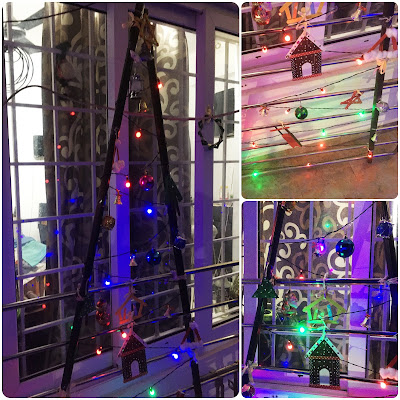 I Wish you all Merry Christmas and Happy New Year 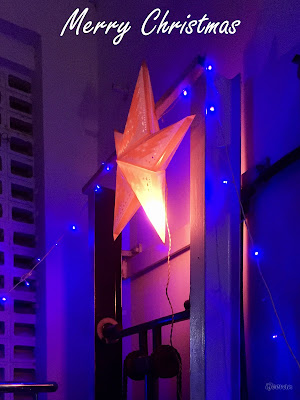 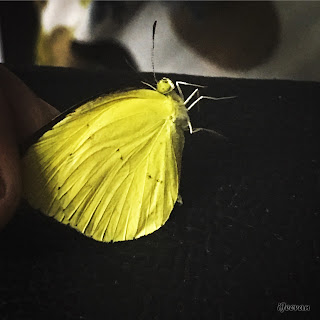 Linking this post with SATURDAY CRITTERS
Posted by Jeevan at 8:20 am 8 comments:

In Month of Cold

I switched off the ceiling fan
as wind blows the coolest,
heart yearns for a warm hug
the moment slipped
between noon and evening.

I took pleasure, as sunlight
took a bright step into the home;
the air still filled by cold
sends goose bumps
to places could not define.

The wind is colder
when blows through the alley,
the back door become a cooler
to chill down everything
rather my heartburns sometime.

I feel for a warm embrace
what does my blanket at night,
and from the arms of dad
there is no wonder
December is a month of cold.
Posted by Jeevan at 4:52 am 7 comments:

Precaution is Prior - Crime Against Women

The police encounter on all 4 accused in Hyderabad lady doctor rape-murder case is something I couldn’t appreciate while every other in the country praised a lot. The first thing stroke my mind when I heard on the encounter was the accused were only escaped through this act of instant death.  I see death, killing or execution couldn’t be severe than living to feel the pain and shame. I’m not against the encounter or support it either, but this could be avoided to punish them any other ways where they regret for their cruel act consciously. Life is precious, and one could not compensate on it and at same time taking a life involuntarily couldn’t be right and those culprits deserve punishment undoubtedly. But shot to dead someone will only free them from the consequences that make them feel regret or experience pain until they die.

The encounter could trigger a fear in those who think of molesting women but I don’t know how long this will sustain fear in evil minded men, when the world instantly and constantly turn over topics. I know the violence against women and children has come to light lot these days and this has to be uprooted from our society where new found thoughts are replanted or a change in perception of men, what should thrive from the homes where children are taught or practiced to treat women with equal rights, dignity and respect. Though they deserve lot more than what reaches our thoughts. Despite the actions taken on the accused and sending alarm to men we need to take conscious measure in protecting ourselves at first place before turn over the society.

We somehow knew the society we live isn’t secure – so what we’re in need of lot more security cameras – and in this condition we have to make certain of our own safety. Though they say fear is an illusion in darkness but all conditions aren’t same and what hides in darkness couldn’t be predicted. So it is better we have a torch to guide us safely and beware on every steps forward in a place (society) where it feel suspicious. I wonder what the education system teaches us rather how to protect ourselves first and tackle a suspect trying to hurt us. Why can't the institutions, workplaces guides/practices on self-defence as prior courses before they learn some technical terms, because our life is important than what we learn or earn. Children and women should be aware of the circumstances they work, study or routes commute as these are the places vulnerable for sexual maniacs to attack. Last but not least, these are things that should never let down women who had come to a place which isn’t easily to come over and men had to protect them from their own sexual.
Posted by Jeevan at 7:00 am 6 comments: 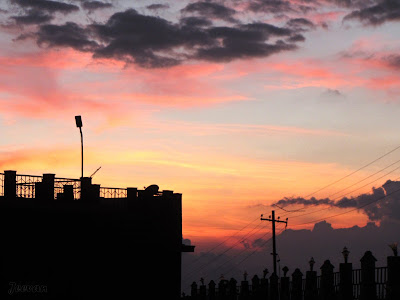 From time to time things change
the sky isn’t the same I look up every time
the wind blows, never the identical
the seasons transform the colours of nature
the trees retreat in shoot of new leaves
while skin isn’t silky in dryness of cold -
lacework is something woven in lack of moisture.

Transformation is a continuous process
which is impossible without nature
the head of all significant changes;
the sky the limit of eternity
isn’t same in its pattern or colours
the remarkable sunrises and sunsets
is an inspiring from time to time.

Life is a constant progress of changes
a change that needs to refresh
like fresh mountain rivers charged
in continuous flow of current;
the mind is something keeps changing
either for good or bad
ponders make things different.


Ps. The spectacular sunset was capture over the mountains from a trip to western ghats around Theni in Tamil Nadu.
Posted by Jeevan at 8:57 am 9 comments:

At the end of the day 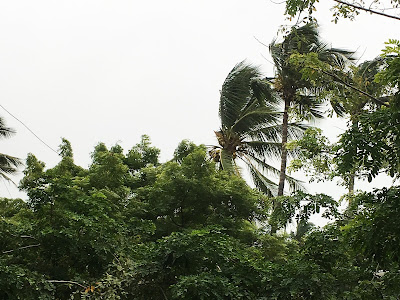 I felt chillness in wind
despite the warm sunlight
bestow, whatever under its glow;
the trees swish to wind
blew, the gloomy mood
while sky cleared the clouds
blue-sky isn’t a surprise.

The sun’s ready to set
splashing its golden rays
to lavish, before it vanish;
the environment is greenish
thanks to eastern waves – MJO
for bringing faraway clouds
to help flourish our environs.

Rains took a break
or almost finished its course
though, the scores aren't fair
competing with other places;
it was refreshingly cool
and I could feel the cold in breeze
since winter isn't far.
Posted by Jeevan at 9:22 am 6 comments: