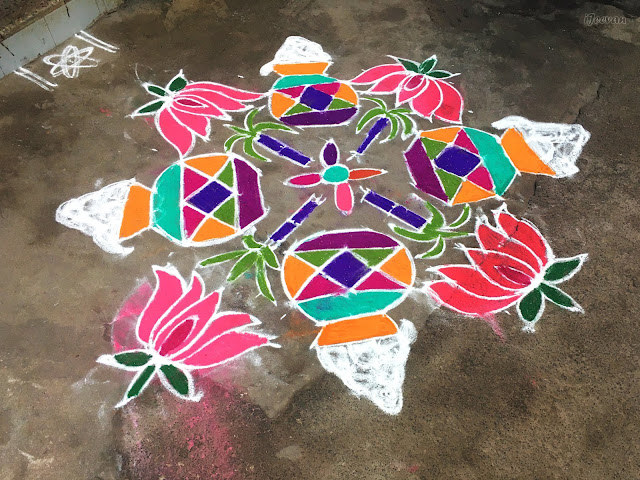 Kolam is a cultural identity of Tamils, as well as to the southern states of India similar as Rangoli that spread all-over India, is believed to bring auspicious to home when it is drawn in front of the doorway or gateway as a sign of welcome. Margali, a month of winter (mid Dec-Jan) in Tamil, is a favourite season for Kolam, where those skipped or unpractised it as a daily activity will make certain drew something in front of the door and the month ends leaving way to Thai – the day celebrated as Pongal, where Kolams take much colourful form from the plain dotted Kolams. Pulli Kolam is a regular art form where it involves drawing a line looped around a pattern of dots (pullis) with certain that all dots are encircled and lines closed at the end.

Kolam take a special place in our every custom and celebrations and drawing a Kolam creates an elegancy to the occasion and there couldn’t be a better reception than making a smile through a cheerful and colourful Kolam.  Mom used to draw Kolam regularly at the doorstep until we resided in the ground floor apartment and houses in ground, now living on first floor we don’t have space other than mom’s knee pain prevents her going down to drew a Kolam. But during the festival of Pongal and other special occasions she takes a strain and draw colourful Kolams in front of the house, and now along with my aunt in next door they help each other creating the magic of colors, Kolam. I always have an interest in Kolalm and never miss an opportunity in capturing the Kolam and what you see here is from the recent Pongal celebration.
Posted by Jeevan at 7:23 am

These drawings are very beautiful. What a joy it must be to see them in front of your house.

it is a great activity

Happy Moments to You,
A ShutterBug Explores,
aka (A Creative Harbor)

Excellent art. We also created Kolam for Pongal here, but those were not as big as urs :)

The drawings are pretty, I agree the colors are magic. Enjoy your day, wishing you a great week ahead.

This is very informative and intersting for those who are interested in blogging field.