Sorry Friends i cant post the pictures, here which i took this week on ECR, the the photo lab said they can't take the photo from the cell, because my cell dint have Bluetooth. 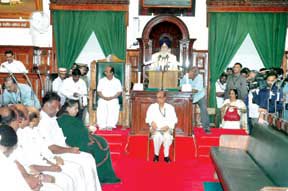 Why do we put Vote on elections? because the person who wins and come and do some good things for public, and talk about our problem in the Assembly or Parliment and get solution for that. But in Tamil Nadu, the Opposite and some alliance party MLA are just go to the Assembly and just walk out telling some pretext or just wait for the ruling party to tell some thing and when they search for some point to protest. today i was watching the News, many opposition parties are walk out from the assembly and giving interviews for Journalist that the Speaker and Chief Minister dint give respect and dint leave us to talk. I think in Assembly the Speaker will give time for all MLA to talk after Launching some Plans. But the Opposition are not willing to hear what the Ruling Government is telling, when they hear only, what the government is telling, then only they can understand the Plan of the Government. After the Plan launched in the Assembly, the speaker will alloud the MLA's to tell there thought on the plan and their suggestion.When the time come for the MLA's suggestion to tell in the Assembly there will be no one in the Assembly, because all of them are walked out, except the Ruling MLA's. Now i have a doubt why we put vote, for the person who is not taking our problem to the Government. When the Speaker dint allow the Opposition to speak in the Assembly, I think they can give a complain to the Governor. Can u see people with out any problem? For the poor people the problem is how to earn money, for the middle class the problem is how to save the money for their future, For the rich the problem is how to protect there Moneys from the thives, like this we cant see a Nation without Problem.

What is the duty of the MLA's? there duty is to find the problem in there Assembly area and take that problem to the government's view and get a solutions. But when the MLA's walkout every day on the Assembly session, when they will talk about the public's problem and solve.

You all know that only in Chennai, the central government have launched a Setop Box to see all Channels. This plan has crossed at least a year. because of this Setop Bok I cant watched my favorite channels like, Dicovery, National Gerography and Animal Planet and some good channels. The rich people can buy Setop Box, but for poor people thay cant buy Setop Bok and they can only watch free channels. But now the State Government has announced to take the Cable system under its control to reduce the monthely rate and take the Cable Tv to below poverty line people, so they can also there favorite channels. The government decided to take the main Cable systems of Tamil Nadu the SCV, Hathway and some others to its control. The SCV was supported by opposition party, so yesterday all party's who are supporting the Opposition have walked out of Assembly for this issue. The SCV is collecting too much rate from its cable operatiors, so the operaters are collecting high rate from the public. When the government take the cable system, they will reduce the rate and many poor people can get benefitted.

My thought is they the MLA's are giving importans for this small matter Cabel TV, but they are not taking many series isuue like this. For example, i have gone at least 3 time on the East Cost Road in Chennai, in a year, whenever i travell, I saw many people are living in Temperory shelters which was provided by Government and some NGO's for the people who are affected by Tsunami. But any one MLA or other politicians have care for them and thing for built a temperory house for them, and in the recent rain many famers have last there crops and living without money for food. Every year on Mattu Pongal, in south Tamil Nadu many villages conduct Jalli Kattu (Bull Catch), in this many people are died and many seriesly injured and lot's of bull's are getting wound and giving stress to them, did any MLA have taken this issue in Assemply and get walk or Protest. the answer for this is No. They are only trying to collaps this government and get it to them. The Tamil Nadu opposition party is also a main leg for central government, with this power they can do many good things to Tamil Nadu with the help of State government, but they are using this power how to collopse the state government. These things not only happening in Tamil Nadu, in all over the World, who know's when are they going to do good thinks to people.
Posted by Jeevan at 1:36 am

I personally think both the main parties in TN are crap, actually throughout india state govts are crap. Come election time, they show up to ask for votes, bmc starts cleaning streets and gutters, and once they win they are not to be seen for 5 years.

Anyways, hey jeevan, I tagged u. See my blog for details.

nice article...
concerning to our MLA's .....
i feel pity on them...even if the MLA's get chance to talk in the assembly they cant talk on their own ...they are jst a remote control for his party and the operator is (mostly will be) the chief of their party.
Mostly the MLA's duties are :- signing the letter for recommendation, to take care of the arrangements and etc's while their chief of his party visits his district (THOGUDHI)....etc etc

we can make the politicians (ruling party) to do good things to the people if we hav the rights to bow out our votes (which is not possible) at any time...

May GOD touch their hearts so they can know the feelings of many poor people.

By the way; You've been mug-tagged. Its the International Post A Mug week. Be a-part of history.
---> info at my site

By the way; You've been mug-tagged. Its the International Post A Mug week. Be a-part of history.
---> info at my site

nowadays politicians do not represent the people who select them, but they are there to make money.... good one jeevan.

Kunsjoi – Thanks friend. Yes very true, when they want vote they will not even get shy to catch the leg’s public.

Kathy – When god come and when they turn, we can see.:)

Smile – Thanks, when they gave respect, giving now.

Interesting blog. I'm always interested in anything to do with the civil war, especially in the area of Bartow County, Georgia. I'm an active member of the Sons of Confederate Veterans (SCV).