Last year I come across the heart of Chennai – the Mount road or Anna Salai, after long time and I got to capture few shots on the buildings that exist as one of landmarks and heritages of Chennai.  We took a drive on Sunday which is the best time to take this stretch that’s almost busy throughout the week since it’s an arterial road and even it was little crowded that day, we managed to capture few photos on the buildings from the movie car, that follows below. LIC Building doesn’t need an introduction in Tamil Nadu as well throughout the country, but for others information, LIC (Life Insurance Corporation) is the Chennai’s first skyscraper and tallest building in India, when it was inaugurated in 1959. The 14 story building serves as the southern regional headquarters of the LIC India and the building marked the transition from lime and brick construction to concrete columns in the region.

The building was designed by the London- based architects on the lines of the UN Secretariat in New York City; but the withdrew of architects from the construction after 4 years of its  commence was overseen by Chennai based architect L.M. Chitale. The location on the Mount Road to construct the building was identified by Chidambaram Chettiyar, the founder of Indian Overseas Bank and the United India of Insurance, for his group’s headquarters. Spencer Plaza is the oldest shopping mall in India and a renowned landmark of modern Chennai (Madras). Originally built during the period of British Raj in-between1863-64, the Spencer Plaza is the first Departmental store in the Indian subcontinent, comprising India, Pakistan, Bangladesh and Sri Lanka.

The building established by Charles Durant and J. W. Spencer was one of the biggest shopping malls in South Asia when it was built and the original building that destroyed in fire in year 1985 was an example of Indo-Saracenic style of architecture. The present Spencer Plaza was opened in 1991 on the same site, measuring about 10 acres and spread across a million square feet built in three phases with parking space for 800 cars.

The plaza is one of the major hangouts for the Chennaities. Agurchand Mansion is a red brick stone building that date back uncertainly more than a century; and it is near opposite to the famous Spenser Plaza. The building is built by an old Madras family called Agurchands; and today the building holds quite commercial shops on the ground floor, whose number of hoardings occupies much space of the building facade, but there are no details about the Mansion, whether it’s running or not. 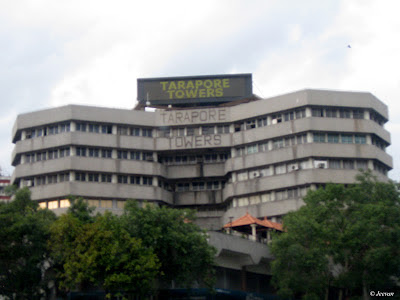 Tarapori tower’s is half a km from LIC building and the large sign hosted on its terrace was one of the attractions on Mount Road. This is the first public LED display come up in Chennai, over 25 years ago or certainly longest time in survive and it usually displays time and temperature of the city.

Our drive doesn’t stop with Mount Road, and we also come across Parris and Central Station, capturing few more buildings along.  I will post on them in further posts...
Posted by Jeevan at 7:18 am

...I have still not seen one good building built on Mt.Road in the last 20 years...

You can write a post about the traffic diversion in those areas :) Jeevan...

Wonderful architecture in the mansion!

Hi, Just wanted to drop by and say HELLO. It's been a busy week/month --and just gonna get busier.

Loved seeing all of the buildings--the older ones and the modern ones.. Gorgeous... Thanks for sharing.
Betsy

Thanks for taking us along with you on your ride along Mount Road. I found the Agurchand Mansion to be interesting.

Brings back some wonderful memories.