A visit to Vedanthangal Bird Sanctuary

I visited the Vedanthangal Bird Sanctuary, about 80km from Chennai, on Friday. And this was the first outing with my grandmother after grandfather passed away in December. I have been to Vedanthangal more than couple of times but only this time I find (or went on seeing) a huge arrival of birds, and most of them were Painted Stork and Little Cormorants followed by moderate numbers of Grey pelican, Back-headed ibis, Little and Great egrets and Spoonbill.

Vedanthangal is the oldest lake bird sanctuary in the country and the steps to develop it into a bird sanctuary has started as early as 1798 when the British government realized the ornithological importance of the region. The small lakes dotted this area acts as feeding grounds for the birds, so it was attracted by variety of birds. Vedanthangal, meaning hamlet of the hunter, got its name from the act of hunting of birds by the local landlord in the early 18th century.

Though the Vedanthangal Lake was declared as bird sanctuary in 1972, it has a unique history where the local populace provide protection to the sanctuary for centuries. The locals realized that the birds dropping falling into the lake create an effect (liquid guano), and when the water is used to irrigate crop fields it yield greatly and saves the fertilizers cost.  And due this the locals protect the sanctuary and thus it attracts around 40,000 birds every season, with an area of only 30 ha. 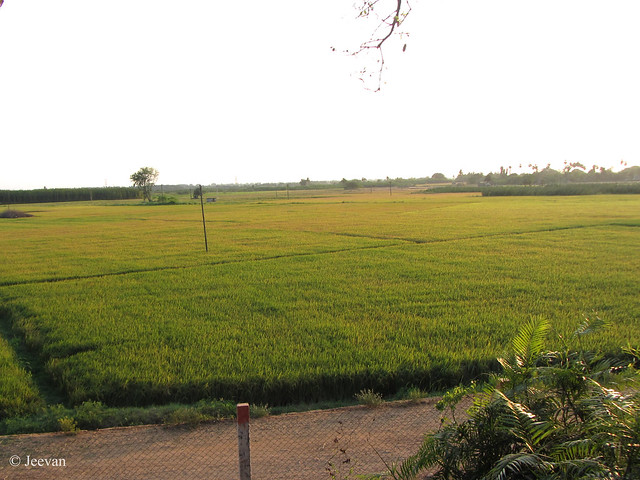 Proving that, the other side of the lake (pic above) was flourished in a golden/green meadow of paddy field! While being fascinated by the birds that decorate the number of trees stood inside the lake, the vast paddy fields on the opposite confront its scenic beauty upon growing sunset was stunning. The paddy fields with little/great egrets foraging is always a beautiful sight and one could not miss such views during a visit to Vedanthangal.

We had been to Vedanthangal in the evening unlike my previous visits in afternoon; I was amazed at the number of birds. But when the evening started to immerse, as sun continue to keep down its effect, many flock of birds resume to the lake after foraging in surrounding lakes. When we arrived the noise of birds weren’t louder unlike it gets darker and it seems it’s the nesting season for Painted Storks, as we saw many juvenile birds of same standing all-over the nests.

Birds migrate to Vedanthangal mostly in winter season (between October-March), but this time due to the torrential rains in December there’s enough water in the lake for the birds to extend their stay. Right now, it is estimated to be about 15,000 birds at the sanctuary. Apart the plenty of painted storks, little cormorants and grey pelicans, I tried to observe variety of birds but was amused to find spoonbills, openbills, a grebes and night heron, only at home when checking the photos!

Although we brought a binocular, it was little painful to watch through the pair of lenses but I loved the close view somehow. Vedanthangal has a pretty neat and flat pavement along the lake bank allowed me covering the entire stretch in my wheelchair. There are couple of watch towers and view points along the footpath to observe birds and I find more interesting shooting birds this time.  At the end of day, we were left with a magnificent sunset with flock of birds flew in foreground.


I took number of photos and it’s impossible to post all at a time… so decided to make many posts out of it and more details on birds.

Linking this post with SATURDAY CRITTERS
Posted by Jeevan at 8:08 am

Wow, I would love to see this bird Sanctuaryand all the different birds. It is amazing to see all the birds on the trees and nest. Awesome post and wonderful photos. Thank you for linking up and sharing your post. Have a happy day and week ahead!

Hi Jeevan,
This is a lovely place that you have visited.
Glad you got to enjoy!
Your photos are awesome and have lots of detail to enjoy.
Have a Happy Day!
Peace :)

wow, that's a lot of painted storks! glad they are doing well there!

Beautiful pictures of the birds, Jeevan! The villagers are doing a great job.

I had been there twice, a couple of years back. Water was not there in the lake last year. It is good to see them back, this year. Will try to visit once more!

I have been to Vedandhangal twice, but have never climbed that observatory. Bring them on - pics, I mean :)

What a great Bird Sanctuary--and so many gorgeous birds. I'm so glad you got to visit there again ---and I'm sure it was great being with your grandmother.

Beautiful bird sanctuary with so many birds.

DI - It’s not an observatory, but just a telescope tower to view birds at close distance... and it seems they place the telescope there only there’s enough crowed at the sanctuary.

Joyful as ever! Such a pleasure to be back and i do maintain what i have always said "You are my window to the world"

I always loved to visit bird parks more than animals being caged in the zoos. The photos of the painted storks are so beautiful.

Wow, oh, wow, I would love to visit this place. All those birds are amazing.