Red Hills and little something. 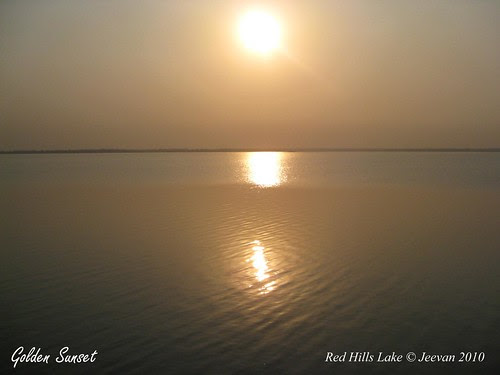 It’s been a while I sense something true happiness and smile; and even then it wasn’t unusual, it sense me something wonderful as no one lately conveyed me love and gratitude this open mind. He’s someone very kind and innocent and a close friend of my dad and I have been reminding him to visit sometime and thus we suddenly decided and went to his home on Sunday in Red Hills.

He’s very glad about receiving me and I just felt how sustain he was truly expressing his desire and happiness, and it was such obvious and touching me. Unlike before, generally I don’t care about others in case my existence gives happiness to someone in dear and who could brake the barriers when there’s a concern and desire for me, but I do expect some respect and I can’t go ahead if there are others who feels unease and hesitate. Even I understand, the attitudes change from a person to another and though directly or indirectly, when facing a situation that seems someone neglect us in all cause present distress. 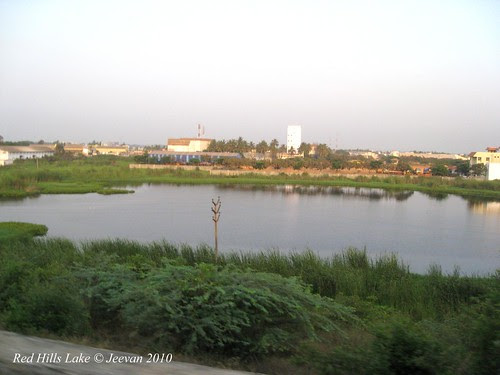 Except him and his missus, others aren’t familiar with me, but there’s noting to feel bad about before the couple’s gratitude and gratification. We had our lunch there and sight their newly constructing home later over conversion and went to the Red Hill’s Lake while returning in evening. There was something disturbing me there and it was nothing the bees and after a beetle entered by ear lately, I’m so frighten about these insects. First there was only one flying across their home and never turned away, and later watching it carefully I guessed it was not the one, but there are many bees on there way to their home through a open window and buzzing across my face while enter the room and I waited sometime for there turn, but they never return.

I hope there was something under construction of bees inside there home and wished it never disturbed there peace.

It was scorching Sunday and roadside tender water also reflects the heat in producing gentle salt water and wanted to think the tender coconut also get sweat in sunshine! Sunday afternoons are my favorite and due to gentle wind and empty state and sound to slumber, the moment would sense bliss in silence. There was nothing different where I was, the mind spontaneously touches those sense and throw back.

Climbing and moving along the bank of Red Hill Lake, views the entire reservoir in its full capacity, leaving alone a narrow line at distance and the gleams of sun set, which was something awesome across the lake producing golden glisten. It seems like a best place for the locals to go for a walk in morning and evening on the lake bank, keeping beneath the fast moving world and clam water bodies. 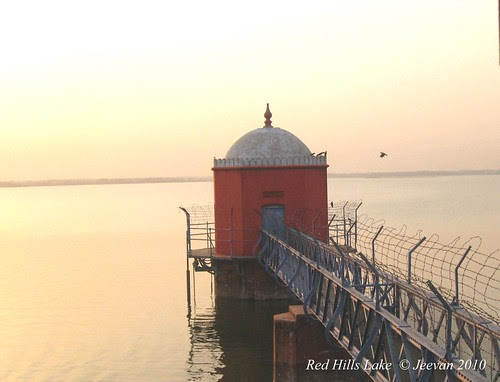 The lake is an important source of drinking water to Chennai, connected by couple of huge and small reservoirs in Thiruvallur District. The lake was still called as Pozhal Eari in Tamil and it continues to quench thirst of chennaities since 1868. The lake continues to hold its full capacity lately, receiving water from Kandaleru dam in Andhra Pradesh through Poondi reservoir apart storing rain water. One part of the lake bank has a better road to move on vehicles, viewing the lake and has sitting platform along the road to spent sometime in evening. The water level watch tower is a famed portion through media and stance as a picturesque with water background.

There was something said about the lake, “that it was used as a military camp by the British and where as an Airport for water planes to land and takeoff. In order to feed the plans, there were few huge M.S.tanks for oil storage on the earthen bunds of this lake and to the heavy movement of vehicles; the earthen bunds are enforced with concrete paths.” 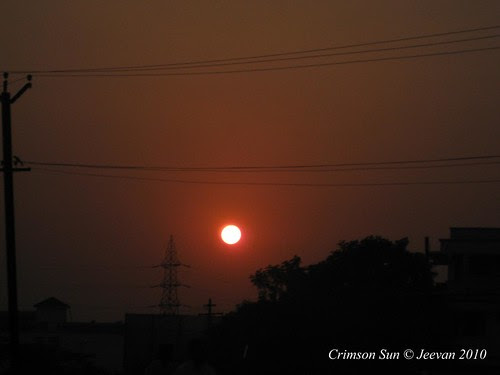 On way back we saw the crimson sun in its whole circle, playing hide and seek between buildings. It wonders to see even on Sundays there’s heavy traffic in city and its suburb, and it sense injurious these days traveling in and around the city. Man I’m truly worrying about my environment whenever laving out of home and do wonder where our world is heading for and what do us and government to reduce the vehicle traffic and pollution. Ho! The whole world is rotating, and now includes my head.
Posted by Jeevan at 4:01 am

The third pic' is totally awesome and the best.

The lake looks really amazing Jeevan ! Your pictures are getting better and better !

Loved your descriptions - be it about the landscape, bees or particularly the late crimson sun wondering about the hustle-bustle even on a Sunday!

and fine photos as usual. Keep it up, Jeevan!

I have been to Red Hills long back and was refreshing my memory seeing your wonderful post. I appreciate for the spectacular photos taken by you especially the first and last picture is absolutely fantastic. Not only the pictures but you have written and described very nicely. Keep it up!

Wonderful pictures my friend and a very well written post too!

Beautiful pictures and description of your trip.

dear Jeevan
I read your blog for the first time today. It is a nice experience to read you. You are full of life as your name depicts --- Jeevan. I will read your all posts.
Go on writing life.
God bless you.

Beautiful place. I have never been to this place till now.

The first and last images are just awesome !