The Lake was on my list of places to be seen around Chennai for very long time and it happened at last to be my first traveled place of this year and it is enormous to see such a lake very near to Chennai, which is one of the three prime lakes that’s the source of water to Chennai. After coming across the hustle bustle of Poonamallee (a suburb town which is always crowded connecting the NH4 with Chennai) a calm narrow road leads to the lake after taking a right about a km on the NH4 with a small sign board as indication. 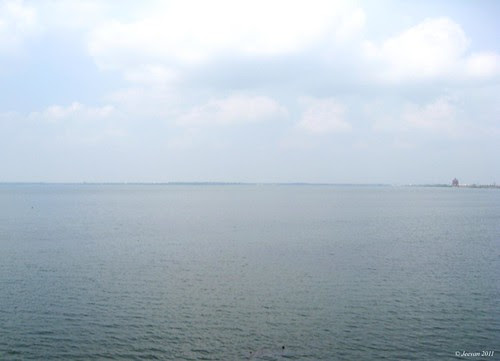 After certain meters the road takeover the lake bank and the drive were around the lake with vast view of water and a lonely pelican swam on it. The road stretches for couple of km on the bank has a wonderful lake tower at the near end of the lake shutters is an attractive Chinese style of building, painted in red as a four story is housed as a measuring lever of water. It seems the lake tower is not open for public view. 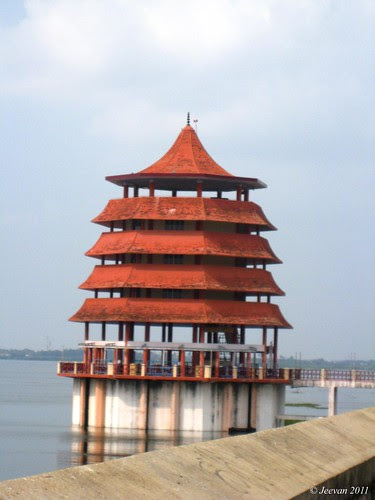 Near the tower a women was selling fishes caught from the lake and a man was fishing from sailing on a plank like cork. We drew slowly around the lake before halt for sometime near the shutter where some boys were jumping off into the discharged water and having fun along swimming in the water pool. Lately the lake overflowed due to monsoon rain and abundant water was discharged into the Adyar River which is a rare occasion people gather to watch.

Later we moved down via the floor bridge after sighting a kingfisher, which constantly flapping it wings near the water surface in search of fish was interesting to see its many attempts by submerge into the water to catch fish. There was another road climbing to the other side of the lake bank after crossing the shutters, but having known later that Kundrathu Temple is nearby we redirect to temple by cease plan to stay back sometime. 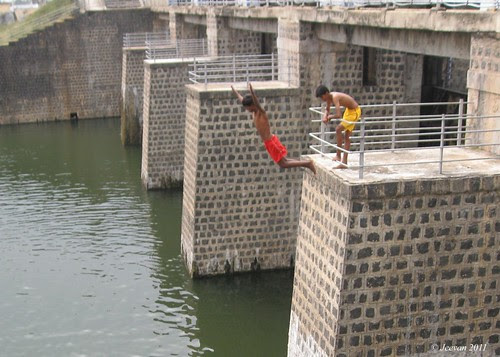 This is cool. Despite being here for 6 months now, I have not set about exploring the place and look forward to doing just that!

I might visit Madras either the coming or next vacation...Chidambaram is on my mind...they say its a calling, can't say when it will materialise :)

What a beautiful place to visit! Love the lake tower photo. Thank you for sharing.

Thank you for the visit and nice comments.

Have a nice day always.

Am getting to know more of Tamil Nadu through your posts. Excellent job.

Wonderful shots of the lake. Nice place to relax.

I actually enjoyed reading through this posting.Many thank