Kanyakumari is partially a Kerala perhaps in many ways, lies within Tamil Nadu resembling a lot and has plenty of churches, and Manakudy is a fishing hamlet facing the Arabian Sea on the west coast of Kanyakumari. I wasn’t planned to visit this village but got to spend some time on its shore while on the way and back from checking the Chothavilai Beach – an isolated place away from the crowded Kanyakumari on the west coast. (More on it later) 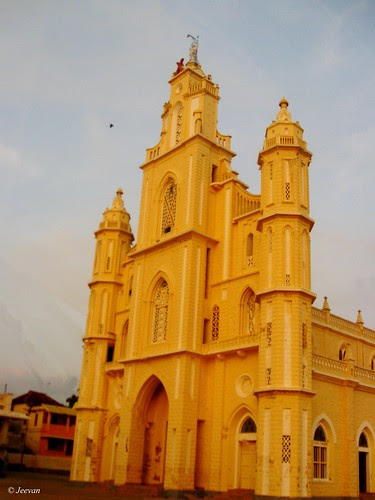 Drive by 8km from Kanyakumari, Manakudy is parted as Mel and Keezha Manakudy which is separated by the river Pazhayar that span like a lake here, merges with the sea. Manakudy is one of the worst affected areas in Kanyakumari by the 2004 tsunami which swept away many lives and things from here, and with one of them we talked from here says the bridge that was connected the hamlets was washed away by tsunami to 500 meters into the river and pulled back into the sea.

It’s said the bridge that was made of four concrete pieces, each weighted 400 tones was washed away except for the two pieces that pushed to remain on both ends of the river. What attract me in Manakudy were the two churches each built on Mel and Keezha Manakudy which comprises the old and new and both are attracted by their colors of pale while and yellow along the spellbind architecture. 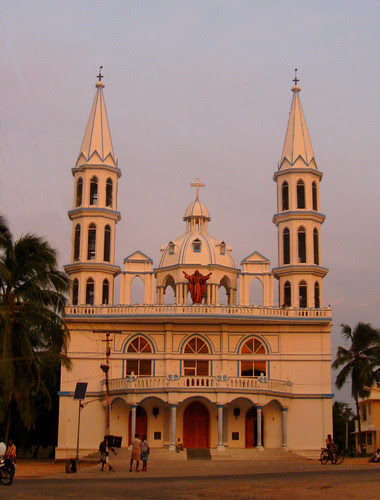 The St. Andrew’s Church painted in pale yellow is very old and closes to shore, and because of this the Church glows to golden orange in evening while sunsets on the sea. The Keezha Manakudy church is a newly built holy cross church, flashes in white and easily catches the attention. The Mel and Keezha Manakudy are connected by a temporally built small iron bridge that contain to pass MPV and the view from here was wonderful to see the waves rushing into the river and far away mountains and newly constructing bridge on the lake opposite. 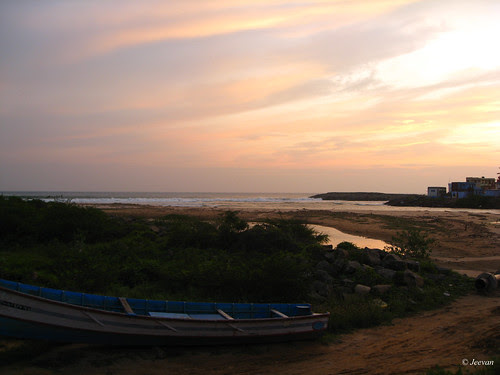 I've always wanted to visit the South :) The last picture is beautiful..

Beautiful photos as always. Thank you for sharing information about the place. I feel I love to visit there someday.

Have a nice day always!

Beautiful photos, Jeevan. I love the last one!

What gorgeous shots - love the golden beaches and that lovely sunset (sunrise).

nice with information and photos

HAPPY PONGAL TO YOU AND YOUR FAMILY

The churches in this place look great.

TicketGoose ease the customers to Bus Tickets Online through Online Bus Reservation by walking into its channel partner outlet which includes Corporate Sectors and Ticketing Agents. . TicketGoose is also fast expanding its IT software solutions for private Omni Bus Operators which will enable them to go online and offer their inventory on real time basis
Book Bus Tickets Online