OPS, Out of the Blue

Unexpected has become the state of Tamil Nadu now, from the unexpected illness of former chief minister Jayalalitha and her sudden demise, and the grand revolution of youth andenforcement of violence and law on jallikattu, Chief Minister O. Paneerselvam’s (OPS) resignation and his open speech (last night) at the Marina beach, following his silent prayer at the memorial of Jayalalitha has kept the state furore. The almost people of Tamil Nadu is already in dispute once Sasikala, the close aide of Jayalalitha, sworn as general secretary of AIADMK and when she was selected as ADMK’s assembly president (which will let her to become CM) has intensified the against feeling. At this situation, O.Panneerselvam’s sudden visit to J’s memorial and his silent prayer for about 40 minutes and claiming that he was forced to resign the office of the chief minister has provoked the public and all social media started to flood with support for the OPS. 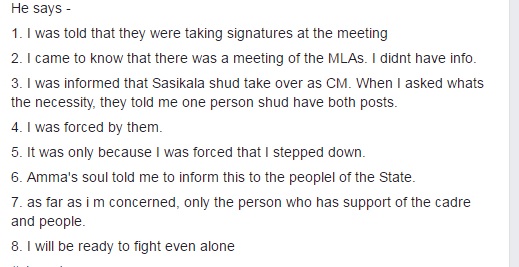 It’s obvious who should be behind the scene and of course, it’s the Sasikala and team. Except being a close aide of Jayalalitha, she had nothing to do with public and political scenario, but her takeover of Jaya’s house and now office is approved by none including millions in their own part, AIADMK. It’s the upper level leaders and ministers of certain groups, who celebrate her for their need and deed, lead her to these posts which she deserves not. Nowhere in their long run of friendship had Jaya indicated her to take leadership after her or gave a little post in the party and in between she was expelled from the house by Jayalalitha after she come to know Sasikala’s family had misused in name of her. Things’ being like that how the party men go behind her and propose for the post of general secretary and now CM is shameful. While there are many true party men and seniors with experience at the 45 years party, selecting an inexperienced and corrupted to lead the Tamil Nadu will absolutely won’t be fair.

More than an assistant of Jayalalitha, she hadn’t put front on anything or focused anywhere. But all of sudden she emerged as Chinnamma (small mother) and speakers of the party started to praise her for reasonless.  Perhaps this inspired her to take bold step and before all, her family was back once Jaya breathed last, and thus forced OPS (who have been appointed as CM for couple of times by Jayalalitha during the difficult situation) to resign by giving pressure via his colleagues. If this was the scene even before she took oath as CM, we couldn’t imagine what kind of attitude the govt. would hold and the state of public if she became CM. There couldn’t be a limit for the unruly things and what has been achieved through the one man army, by Miss Jayalalitha, would be collapsed due to ineffective ruling.


The Jaya’s demise continues to be a mystery even though the doctors reveal certain details, OPS has said to form a commission to enquire about her death. After the OPS opened up, the overnight meeting held by Sasikala with all MLA’s had removed him from the post of party treasurer, but he has said to take oath as CM, again, if people of Tamil Nadu wishes. After the midday meeting held at the presence of Sasikala, once again, the 131 MLA’s (who supported Sasikala for CM) has been hijacked in buses to safest places or on tourism to keep them away or meeting OPS to lean their support. Things has been going on its own, and don’t know what’s gonna happen tomorrow where they are meeting the governor and request to form a govt. headed by Sasikala. But the overall support of Tamil Nadu is for OPS, including myself who admire his simplicity and down-to-earth attitude. Let’s hope for the best. Support OPS!
Posted by Jeevan at 10:09 am

For me OPS seems to be the right choice for the CM position. He was the chosen one by Amma.