Begin the year with a new laptop as I said goodbye to my nine-year-old companion, the Dell Inspiron 15. It was a journey uninterrupted in any major ways, and it doesn't require service for the last 3 years perhaps it could be a reason for its sudden loss of response. I could have woken it up by changing the motherboard, but I decided to put it rest and went for a new one.  Asus Vivobook is cool and enough for the works I do. It was quite an upgrade for me from Intel i3 to i5 processor, 4Gb to 8Gb ram and 500Gb to 1TB HDD, and Windows 7 to win 10. 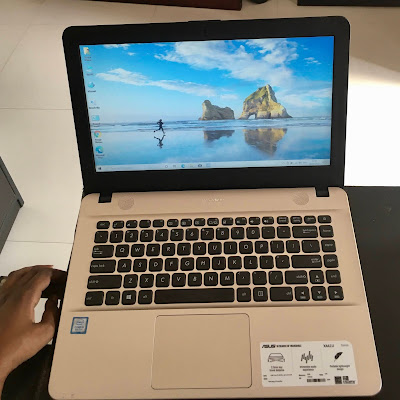 Actually, I thought of creating a record as I believed my Dell laptop would last another year to complete a round of 10 years. But I could have made it if I could spend one-third of the amount spent on a new one. I know it would give me trouble even if I spend the amount as the touchpad lost its senses – I couldn’t be comforting all the time with a mouse and a broken bezel, and I needed an upgrade, so I decided to spend the money on a new laptop. Though I couldn't think of any other laptop other than the Dell, I also no need to say why as its sturdiness is world known, but a friend suggested me to go for an Intel i5 processor and Dell's laptops at this range are out of my budget, so I went for the Asus which came under my budget.

The only difficulty with the Asus Vivobook was its change in some key positions on the righthand side of the keyboard. But the typing is much easier than before, perhaps because of the soft-touch keys, and being a new laptop thing looks easier. I need to install MS-office and photoshop, the prime software’s I use on my computer, separately, and add backup files from the previous laptop hard drive. I’m overall content with the gadget and need to work more to use its various features.

Hello, Out with the old in with the new! Congrats on getting a new computer. I hope you have many happy years using it.

Cool... I too need to get an i5 laptop in the future... I am thinking of Mi laptops bcos they offer a great value for money, like their phones... but asus or lenovo are fine with me too. Have fun with your new lappy :)

Nine years is a great run! Congratulations on your new laptop. Have fun learning all the cool things it can do.

I hope your new computer works as well -- and as long -- as your old computer did. Best of luck!

Congrats on your new laptop. Sounds like a nice one.
Take care, enjoy your weekend!

Take it as an opportunity to get a new laptop. Looks and sounds a great laptop to work on. I have just received a hand me down laptop from my son.

Looks great with a new laptop!Mine is very old and no newfeatures

I miss a fast one!

wish you all good!

Glad you got a new laptop...also glad you were able to use your old one that long! I have never had one last near that long.