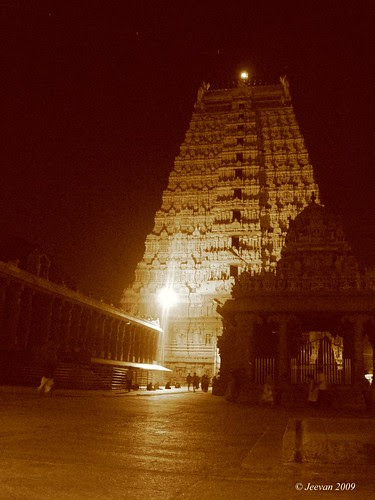 I had been to Thiruvannaamalai this week and visited the Annamalaiyar Temple one evening and felt awe by the structure of the temple tower in sodium lights. The picture above was taken with sepia tone and I love this effort taken than with usual color tone.

It’s out of my memories when I visited a temple last and I’m glad they have put ramps across this temple entrance which allowed me to go at least inside the temple premises to view somehow structures and sculptures. But except the temple tower nothing interests me and I couldn’t view much difference inside the temple since it was dark already.

The inscription says that the temple originally dated back to at least 2000 years and might have been a simple wooden structure at that time, but the present masonry structure and temple towers date back approximately 1,200 years. The temple tower in the picture is known as East Rajagopuram (king of towers) which is to a height of 217 feet with 11 tiers and the temple with 4 tower entrances offers a grand disclosure of the temple premises.

The temple with a 1000 pillared hall and tank – which I couldn’t view clearly, were built by Vijayanagara Empire Krishna Devaraya. The most famed celebration of this temple is Karthikai Deepam festival, which falls on the full moon night of Tamil month Karthikai. The ten day event that continues on this occasion culminates on the day of Karthigai Deepam and on that evening, a huge lamp is lit on the Annamalai hill top with three tons of ghee.

Every full moon night, tens of thousands of pilgrims visit this temple and circumambulate the 15km long Annamalai hill with barefoot. The hill is approximately 1600 feet. The time we enter the temple is 8pm, and everyone went ahead to worship god and me and my cousin stayed within the premises and taking pictures.

There were a group of children sat near a Nandi (bull statue) and counting the day collection through selling flowers and few of them were taking pictures of the tower with their mobiles, and there was a cute little putting steps about, but never came near as I was waited to picture her. The distance between our room and temple was walk able distance, so I went on wheel on the busy and dusty streets and it was great time going around a family trip.

There’re some more pictures and things to describe about my trip to Thiruvannaamalai and I will do it in time before I get lose track alike.
Posted by Jeevan at 6:13 am

Hi Jeevan
Its a fantastic shot from that Temple :)
You captured it fantastic !!!
Lovely written my compliments :)
Have a nice evening
and enjoy your weekend ....
Your Dutch friends
Anya :)
Kareltje =^.^=

beautiful shot of the temple bro. really love the processing, and the point of view. good job.

liked the writeup alot. i haven't gone to Thiruvanamalai yet, will do the next time.

Lovele pics ! thanks for sharing

WoooW!
I couldn't imagine how beautiful must be insite this temple.
Picture is really fantastic in this color.
Thank you Jeevan,
and put more pics.
Thank you for this information!

Dear Jeevan, It is a awesome photograph... The sepia mode gives it a divine look...

hey, it is not fair only one foto ? you should have posted more such images of this beautiful temple.

Very impressive! And thanks for the note that goes alongside!

miss your travelogues....and so look forward :)

Very nice and beautiful description. I have been to Thiruvannamalai several times and liked it very much. You have taken lovely and wonderful shot of the temple. Oh! what a colour combination. Excellent shot and post.

good one...just posted on one pillyarpatti :)

Looking forward to hearing more about your adventure :)

Have been there, it is a huge place :)

Thanks everyone for your compliment and appreciation :)