A candle that blown out more than a decade ago, and still continue to glow brighter in our hearts and continue to be so. The candle I like to mention her is Mother Theresa, whose birth centenary is celebrated today. I see her as a candle that melts itself to give light and life to others, and of course our mother’s vision can’t be easily appreciated, because her life is a mission that starts missionaries of charity to aid and feed poor, sick and orphan people and those dying for. 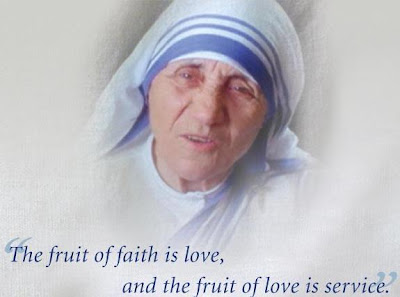 Mother Theresa has dedicated her life to the poorest of the poor and this dedication has become her life’s ambition. Thus her ambitious passion brought her the Noble Prize for peace, by appreciating her service and compassionate. The Albanian born mother is named originally as Agnes Gonxha Bojaxhiu and as per the rule of changing the name to become a nun, she chose the name Teresa – whom she vow to become as Teresa Martin, a nun and missionary who dedicated to poor and sick people.

The 18 year old, sent from the Ireland’s nun’s home, where she learnt English, came to India and joined the West Bengal’s Christians church and served as a teacher at Loreto convent school in Calcutta. The worst situation in Calcutta then in poverty, insanitary and over all the pavement dwellers being fed besides the drainage wring her heart and thus she decided to live for them. After receiving the Indian citizenship, she abandons the Loreto nun’s home practice and began to wear a simply cotton sari.

After Vatican’s permission, she started the missionaries of charity and later a home for poor and a hospital to them. She also stated a home for abandoned and orphans, and thus by devoting herself to service the poor and sick patients, she had been talked by everywhere around the world, and it left in peace and struggle when she passed away in her 87th year. Today being her birth century , India is yet to commemorate her by releasing her postal stamp and this is just not enough, and we all need to keep in mind that we do at least what she had done immense to others. Let peace sings to mother.
Posted by Jeevan at 7:30 am

I was moved to tears reading the memory of this brave woman.

It is hunger for ordinary bread, and also hunger for love, kindness and caring, so while people suffer from extreme poverty.- Mother Theresa

Perhaps nothing can be said about Mother Teresa, enough to describe the wonderful person she was and the magnificent things she did!

dear jeevan,
in 1980s itself i wanted to join her mission. But family responsibilities must be given first priority ( according to Hindu dharma ) .So i was thinking that after finishing my duties , i could join her. Everything has changed.anyhow my humblest wishes .