Following the ‘Sky Fall’ other day, I watched the ‘Runaway Train’ in the weekend at home-theater. Almost I enjoyed both the films, sky fall sounded like the best James Bond film ever made or I seen - I am not a James bond fan and haven’t watched many on its series, but I feel sky fall lives close to perfectness and straightforward. Daniel Craig performance was really good and he proved to continue to fall in mind as James Bond. Runaway Train is another interesting movie directed by Andrei Konchalovsky, the 1985 adventure thriller is based on story of two convicts escaped from a prison in Alaska, and boards a train that goes out of control. 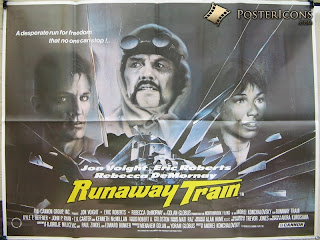 Manny and Buck, who escape through a sewer pipe using Buck’s position as laundry collector in prison, took a freezing cross-country hike to board a train that runaway after its engineer suffered a heart attack. Only after a collision that badly damage the lead engine to accelerate to dangerous speed, the convicts aware the situation and along with Sara, a locomotive hostler on board, they attempt to stop the train by disconnecting the MU cables, apart the railroad heads decision to derail the train to avoid major accident. The warden of the prison chases the train via helicopter to catch the convicts before it collide.

The opening scene of the train sound marvelous and its progress at great velocity takes on an ever adventurous train ride across desolated snowy Alaska. Jon Voight as Manny, portray two different faces: Vicious, while asserting dominance over Buck (Eric Roberts) and hit him hard to scramble outside the engine and sensible, when decided to face dead by uncouple the lead engine, leaving Buck and Sara safely behind. Even Rebecca’s part was very little her expressions were expensive! The music really put on a vibrant stream when the train moves esp. the final notes on violin or some other instrument was awesome. Cinematography was another wonder indeed ruled the scenario!
Posted by Jeevan at 10:33 am

I haven't seen Sky Fall, but friends say it is excellent.

I loved Skyfall...great movie. One of my favorite Bond films ever. I still rank Casino Royale #1. I haven't seen Runaway Train for a long time! I may have to watch it again soon.

This movie sounds like it is full of action!

Great review. I would love to watch this.

havent seen anyone of them..

I have seen a few James Bond movies and enjoyed them, but not this one. Should watch it sometime soon...

I love trains, but unfortunately have not watched a lot of movies involving trains. Looks like here is one I must watch :-)

Skyfall is one of my favs too :)
second.. I shall watch it soon.. I'm always ready to watch a good movie !!