The essence doesn’t lack a bit

Wow! I don’t know how to express my happiness and enthusiasm over meeting this very young man at the weekend, who is just 17 - read the age number in reverse. Hahaha… yes, of course 71! But unlike anyone in his age, he is energetic, cheerful and charming who I ever met someone like him until four years back which led to an unforgettable memory that always cherish in mind. I am so glad the moment come alive once again this weekend at home without a bit lack of essence. 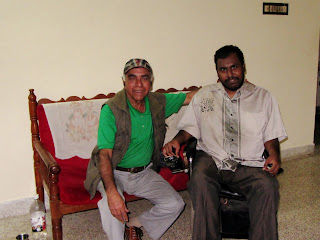 Yes, I meet one of my dearest friend, the one and only Andrew. I don’t know people following this blog remind my post (here) about our first meeting at home that drives us to Marina. I’m so delight to say that no one would have led their life so happy and cheerful like him, dedicated to friends flourish with smile and make surrender anyone with his shooting phase using bazooka kind of camera lens. I was dragged toward him actually because of his marvelous photos… but once connected I more liked him for his attitude and spirit that would stimulate anyone surrounded him to content joy.

I would count the time spent with him (even it was less than 45 minutes) were the moment so refreshing, joyful and ever enchanting… forget almost anything bothered me and rejuvenated along with him upon his uplifted spirit. As soon he entered our house, the atmosphere - so dry and unchanged - took a roller costar ride of laughter and amusement and making it as favorable, I conjoined with him enjoying the moment while still not coming out of wonder how delightful he was taking chances to ease everyone.

We introduced through the Flickr and spoke over the phone few times before embraced alive, we continue being in touch with Facebook. His embrace was something healing, quite warmth and bears abundant nourishment for a healthy lifestyle. Even hours later he left, his fragrance of perfume and cheerfulness continue to occupy the ambiance of house, haunting irregularly. He also shared with me some of his fabulous photos he shot while his flight encircled Chennai before landing at airport.

He had visited our house only once and I also haven’t conveyed the message of shifted home, but he confidently came over to give me surprise and called from a place close to ours for direction. Wow! I just don’t know what to say, I am so glad to have a friend truly devoted to friendship. I love you my friend… if you read it. Cheers :)
Posted by Jeevan at 10:23 am

what a wonderful friend he is to look you up again! and an uplifting, happy, giving spirit he is! thank you for sharing him with us!

Andrew sounds like a wonderful soul and a very gifted photographer!!

In this day and age, it's a rarity to have good friends. You are lucky, while many others are not.

Wonderful to get to know your friend Andrew. May his tribe increase. That also shows about your ability to have friends across the age groups. Nice to know you too Jeevan.

I lce the way you describe the feeling of your friend's visit like being on a roller coaster. So much fun! I'm happy you had this visit from a special friend!

That is a great friend you have. I can understand your joy in meeting him as it always nice to spend time in good company.

A vintage friend. Salute you my friend.

A friend in deed
Is a friend indeed

I always tell all the bloggers that we need to have good friends until the end of our lives. I met many terminally ill patients and they shared their regrets for not keeping in touch with their long lost friends.

I always tell all the bloggers that we need to have good friends until the end of our lives. I met many terminally ill patients and they shared their regrets for not keeping in touch with their long lost friends.