As usual the expectation leads to deceive, but not quite because I anticipated nothing much despite hype created by AR Rahman music. Mariyan is absolutely wonderful movie however it lacks energy or feel boredom, the essence of love uplift the story as deep as ocean and vast dry landscape of Africa produce an embrace of romance and adventure. The film opens to cheerful Sonapareeya (song), sails on the overseas of love, romance and struggle to reunion parted by a strange ordeal in Africa. 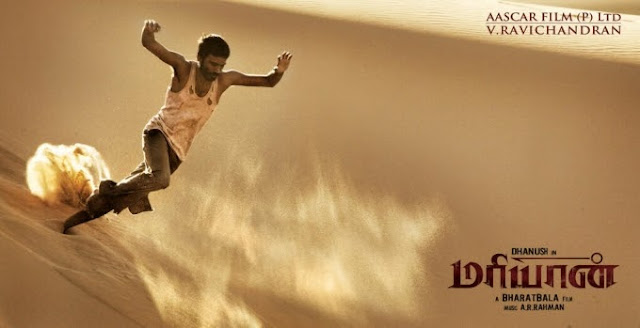 The film is based on a real-life incident of three immigrant oil workers from India being kidnapped in Sudan and how they managed to escape from being hostages. Dhanush played the lead character called Mariyan - which means ‘a man who never dies’; hails from a fishing village in  the southern tip of India goes to Sudan on contract basis to work in a construction site, to provide financial support to his ladylove. On his successful tenure and backpack to home, he is caught by the Sudanese terrorist, along with two of his co-worker were dragged through unknown terrain demanding money for their freedom.

Apart his great venture across terrible landscape of Africa and chased by merciless terrorist following brutal attacks… the film deals with caressing love and romance at initial half. Parvathi is paired with Danush; pursue him with love affair until he reveals back his hidden love, take us on a beautiful voyage of elegant love and natural expressions of Parvathi.  Dhanush has undergone a great ordeal from bottom of sea to drought prevailing desert or landscape of Africa, delivered a performance of absolutely tamed fishermen and strong ability beholding lean body.

The film also has a scene of fishermen’s body washed ashore expose to Sri Lankan firing. Dialing a phone to his ladylove, from the custody of terrorist instead calling his company for their release is something showcased the depth of love but not so interesting! AR Rahman’s music has assist advancing the feature, which has been one of the prime aspect make watching pleasure… Neetru Aval is a beautiful song fascinated with love, but I disappointed with Kadal Raasa Naan… for which I expected it to be more savor and cheerful, but it fall into sorrow.

The film directed by Bharat Bala - who produced the acclaimed Vanda Matram video composed by AR Rahman - could have make it more interesting and serious the second half rather leaving it obvious to guess. Cinematography was handled by Marc Koninckx; captured the emotions more graceful and amazing underwater scenes.  Mariyan somehow lacks entertainment but good watching for the performance of Dhanush and elegant love scene.
Posted by Jeevan at 9:49 am

I head about this fluck at zoom one day.. Dushant is such an amazing actor... I loved him in this lateds movie in which he was paired with sonam...
Well is this one in hindi!!!
Keep in touch
www.beingbeautifulandpretty.com
http://instagram.com/beingbeautifulpooja

Interesting honest review of the movie.

Great reading about this. I may not see it, but reading definitely made me aware. Thanks Jeevan!

I heard similar reviews from my other friends too.

I may want to listen to the songs, but I don't think I will watch the movie. Good to read the review anyway, different story-line.

It sounds as if this could have been a very exciting film.

Even though the film lacked energy, I think from what you have said that you enjoyed it OVERALL.... I'm sure the music was great --and Mariyan must have been a good character...

Thanks for the review.
Hugs,
Betsy

It actually sounds really intriguing to me. I love films about survival and perseverance :)

plot is interesting..
maybe I'll see it if it comes in hindi :)