Ganesha is a celebrated idol in India and Vinayakar Chaturthi is one of the grand festivals celebrated here on the belief of Ganesha’s Birthday. Despite being an atheist, Ganesha Idols are my favorites from childhood and I had been an ardent of Ganesha when I wasn't conscious about my belief, but I still like the idols of Ganesha that comes out in various and unique shapes. I know a friend in Flickr who has been a passionate collector of Ganesha idols and every year he used to arrange Golu (display of dolls) from the huge collection of Ganesha idols he had been collecting for years. Take a look at his Golu set (here) to wonder how huge is collection of Ganesha idols. 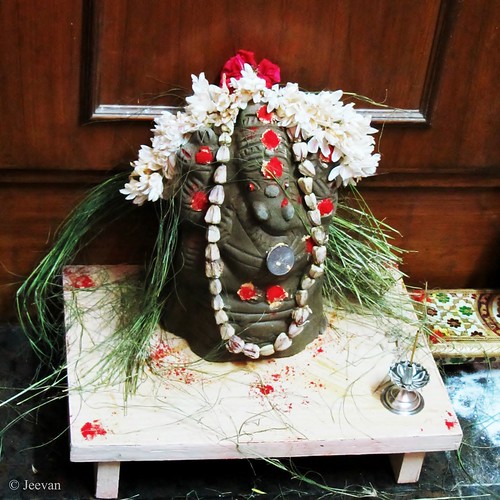 Above (and beneath) is the picture of a clay Ganesha idol we bought for the festival at home. Parents purchased the idol a day before to the festival and placed under the Puja cupboard. We made vada, sweet pongal and chickpeas along with usual meals, and I spent most of the day watching special movies on television. 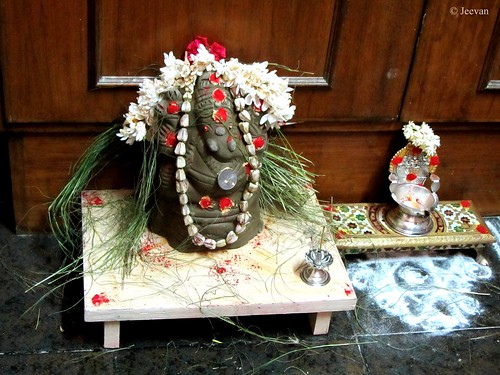 Mom has decided to dissolve the clay idol into a bucket or tub water tomorrow, which we have been practicing for past half a decade, instead dropping the idol at sea or river. The dissolved clay water is later watered to the plants. It is also believed the idol must be immersed at the end of the day of worship or three days later from then.
Posted by Jeevan at 6:52 am

Festival greetings to you and all your loved ones Jeevan.

When we lived in Mumbai, people complained all year about pollution from Ganesha idols, and then did the same. Not that much Ganesha worship here in north India.

Your mom is great with the bucket immersion.

We also do the same:)

I wonder why immersing a clay idol will create pollution? Beautiful Ganesha in your photos! :)

We don't celebrate it here in delhi
I like that ur mum dissolves idol in bucket and water plants later , not into a river
Keep in touch
www.beingbeautifulandpretty.com
www.indianbeautydiary.com

CUTE,BRIGHT AND CHEERING IDOLS.GREETINGS AND BEST WISHES ON THE OCCASION!

This is an eye opener for me. Thanks for sharing.

Jeevan,
Your method of dissolving and watering the plants with the water is quite novel and a good one at that.

In fact when someone doesn't be aware of afterward its up to other people that
they will assist, so here it happens.