Our city celebrates 375th year of establishment today… here I share a couple of photos on one of the city’s oldest bridges, Napier Bridge. 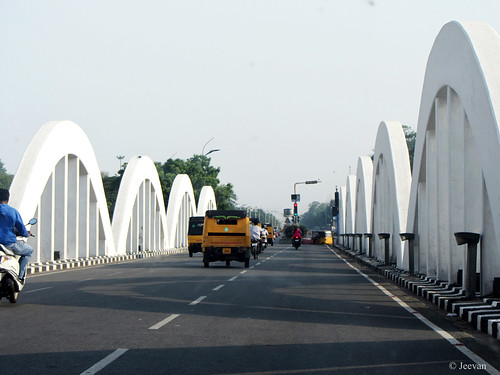 Also known as Iron Bridge was built in 1869 by Francis Napier, who was then Governor of Madras. The bridge was constructed over the Cooum River, connecting Fort St. George with the Marina Beach. Although the bridge was narrow before, it was soon converted to a concrete structure in 1943 by Arthur Hope.


Alongside the old bridge, a new one was built in 1999 with a 10.5 meter-wide carriageway on the western side. The bridge is 138 meter long with 6 spans (bowstrings) across the river near the mouth. As part of the Marina Beach beautification, special lights have been fixtures beneath and on the arches and surface of the bridge, provides visual effect during night times. This architectural marvel stands tall and proud, making it one of the most significant landmarks in the city.

happy birthday to your city. i love the arches on that bridge.

375 years of establishment , wow
that bridge is so old, bravo
keep in touch
www.beingbeautifulandpretty.com
www.indianbeautydiary.com

That's a wonderful bridge. Congrats on the foundation of Chennai!

Thanks for sharing. Chennai has been celebrating for the whole week ! Did you take part in any of the activities commemorating this special day/week ?

Rama – I am interested in taking part of any activities, but my situation is not showing favor to me. There are number of walks and exhibitions going on, but I enjoy reading articles on the newspapers on Madras.

Wow, good to see a brightly painted Napier Bridge! I am trying to go to a few Madras day events, but work keeps me inside (mostly!).

A grand city. I have visited it few times and have always liked it.

Love that bridge... What a great one.. Thanks for sharing about Chennai...

Goodness! My country will only celebrate our 57th Independence day this Sunday.

This bridge is nice and I have seen the exact design in many parts of SE Asia. It must be some British influence and style.