Life along with monkeys

My place of residence in Adyar, Chennai, has lot of monkeys! Since my native is Adyar, we transferred to the neighborhood area (buying a ground floor flat, 8 years back) to prevent difficulty of climbing up and down to the first floor home there. Now shifted back to Adyar for the last 5 months, mainly because of the emotional attachment my father hold towards this area and having been grown myself for more than 20 years here, he is more than three decades ahead of me. Though we couldn’t go back to our native home - which remained to be first and second floors since my uncle runs a workshop at ground floor -  we had rented a house close to ours, therefore my dad don’t need to wander between the neighborhoods.

I have seen monkeys (bonnet macaque) in my area even before shifted to neighborhood, though I had no idea about them until transferred back to Adyar. I not even thought that I would be back here like a bounced ball, but taking years to respond. For me where I reside becomes second, because I have come to believe that I don’t belong to one place. My intention was comfort and peace, and I am always open to experience new environment and ready to adapt anyplace with basic infrastructures. I dream of living in suburbs, where pollution and noise were at least. That too driven towards the southern districts rather closes to Chennai.

The monkeys here aren’t much troublesome, though they make their presence noticeable. At the rear of our house, canopy of trees (mostly large) sprawls for few hundred meters provides wonderful shelter to the monkeys from very young to aged. Also being very close to Adyar Theosophical Society and Besant Garden, which are very few patches of green across Chennai, adjacently, gives way to forest environment including number of rare flora and fauna. I’m really not sure these monkeys reside among the canopy of trees at the backyard, because they don’t make their way everyday across us. But few houses away from us used to make mild explosions sometime, which we come to know through our servant maid that they blast crackers to drive away the annoying monkeys.

Mostly they come as a group or family, sitting here and there, climbing up and down and leaping through the branches of trees. But they don’t stay long into our sight, as they keep moving like nomads. There are even huge monkeys (perhaps obese) among them, which could scare anybody with their looks. Before I go ahead continue with monkey stories, I need to say my house has inbuilt something pre-cautiously to prevent monkeys entering or looting things leaving its hands through the windows grills. Or perhaps through their early experience with monkeys annoyance, the owners of the house has made additional frames of net to the existing windows, so that we could open the windows without fear of monkeys.

But the windows in the hall doesn’t have this facility, so monkeys have attempted few times entering our house and also succeeded, which we haven’t know until one night dad wake up to see a monkey sitting on my bro’s helmet left on the sofa. Once saw him it leaped through the windows but certainly scared my dad who didn’t expect a monkey sitting on our sofa, that too at mid-night. We were blaming the cats other day for coming into house and drink the milk left at the dining table. But through this attempt we confirmed it was the monkey, and not the cat. Few days back I read news in paper, that a monkey has been constantly attacking an apartment in the neighborhood and its main intention was drinking milk from the milk packets that dropped at every doorstep in early morning. Before the households collect the milk packets, the monkey empty those and also become so obese because of drinking only milk! Lol

A monkey here also tried to scare me once, when I was alone. I working on my laptop other day and suspect something leaps off the window before I saw it clearly. But our pet, which was sleeping near my wheelchair, alerted me by suddenly barking at the window. Initially I too thought it must be a cat, but following the incident above it sounds certainly to be a monkey. Our pet haven’t seen monkeys often, so she kept barking every time they come around and also become crazy to chase them. My mom was plucking flowers one evening (from daily jasmine vine), which has become her daily activity after shifted here, a monkey came waking on the compound wall threatened her thinking she’s having something eatable in her bowl, which she use for collecting flowers. Though it doesn't do anything, she left the bowl on the wall and moved away and it passed as well.

So far the monkeys hadn't been a trouble for us; but it is fun something watching their activities and also provides opportunity to conduct photo shoot on them. The huge ones make wonder through their appearance and they aren't active and fun making like the young and middle once. I leave the post with a small collage on the monkeys fun below, shot at various moments! Thank you 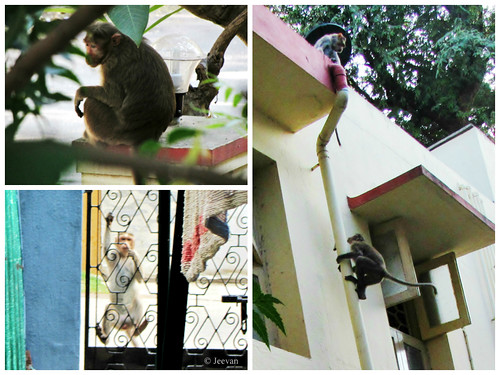 LOL Jeevan parts of this made me laugh. I can't imagine waking up in the middle of the night seeing a monkey sitting on the sofa. I'd say that did scare your dad!

wow! that's amazing! i'd be scared of them breaking into your home and surprising you, though. and stealing milk and food! oh, my!

It must be a constant set of creatures hanging around. Monkeys are larger than our squirrels and raccoons so they would be more of a bother. We feed stray cats out our front door as they are ferel cants and are very scared of us. I enjoy reading your life with the monkeys and cats.

Wow - that is a lot of monkeys - and they do look very well fed, thanks to you guys!

It is always enjoyable to watch their antics.

Nice pictures of the macaques.Nowadays monkeys are invading human habitations due to dwindling forest cover due to rapid de-forestation.You take their territory they take yours. Macaques can be a big nuisance. They are very bold and not afraid of human beings - they will grab, steal, scream,attack, bite .... They live in joint families and move in groups.The babies are cute and are looked after well by the adults.Nice to watch them remove fleas from each others hair.They make good subjects for photography.

jeevan,
nice.very nice.Watching them would be great fun.In our paramount house in 2004 there were a family of monkeys.They used to enter and take away many things,knowing that after 9 a.m till 4 p.m i would be at school and so they can move freely.i closed the balcony door.but was confused to see wheat packet lying dragged.the clever monkeys had deputed their children to enter through the windows.
clever, very clever they are.

The monkeys certainly make your life interesting. I guess they keep you from being bored, just like the squirrels and chipmunks here keep us from being bored. You got some good pictures.

Your story about monkeys reminded me of our constant struggle with Squirrels, Chipmunks and Raccoons. Our critters at least are afraid of us --and will run away from us. BUT--they certainly make a mess of other things (like eating our bird food or digging up our bulbs in the flower beds). Guess we all have 'critters' we have to share our lives with!!!
Hugs,
Betsy

Great recount of the happenings. :)

This post really tickled me to see the monkeys everywhere. It is so similar to my country except that we also have the red bottom ones who attack passing joggers.