As I took an unusual road to Ooty, I passed Lovedale before entering the town and found it wasn’t far away from the town, so we passed without stopped there with a plan to return later leisure. Making it certain, the cottage we stayed was close to the Lovedale and opposite to the road leading there from the Ooty-Coonoor main road. We stayed at a place called Fun City, on the outskirt of Ooty and it is a place formerly seems to be an amusement park which later turned into property development and many cottages and homestay keeps emerging out there. Lovedale is just 6 minute drive from there and it was almost afternoon when we checked the lovely (Lovedale) railway station.

I had no idea about the timing of the train’s arrival and passing the station but we learned only after we reached there that this was the time of the arrival of a diesel engine with passengers from Ooty. Actually we packed the lunch when moved out of the homestay and wanted to make to the railway station after having the lunch, when we already parked at the station parking. It was 1.30 pm and the station guard told the train will arrive in 10 minutes, so we postponed the lunch and waited for the train. Meanwhile I took some lovely photos around the station where we are the only visitors and various aspects of the station attracted me.

Lovedale, like all other Nilgiri railway stations, continue to operate from its original structure and it shares similar architecture as well. Coonoon being the junction railway station and Ooty as important and final destination on the mountain journey comes up with big operation rooms and passenger hub. But Lovedale is a passing railway station and only local people seems to board on and off and sometime tourist get down and take some snaps while the train halt for few minutes there. I actually thought the entire Nilgiri mountain railway (runs for 46 km) has turned into diesel locomotive but what I really don’t know was the stream engines are in continuous operation between Mettupalayam and Coonoor and only further upstream to Ooty (18km) is operated on diesel. 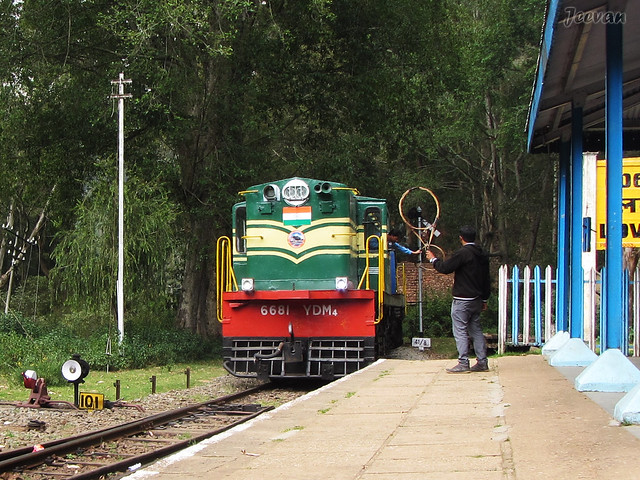 The train entered the station at 1.50 pm and moved exactly after 2 minutes halt and the train was fully loaded with passengers. As I was excited taking photos on the emerging/halted train, the passengers were curious watching me, taking photos from the wheelchair. When the train enters the platform the station guard exchange the rings (which looked like a wireless tennis bat) with the driver, which I Google to know is a “railway signalling process and the ring is a token, a locomotive driver is required to have or see before entering onto a particular section of single track”. In the picture above u could see the guards ready to exchange the rings, but the driver dropped the ring on the platform and took the ring from the station guard and it’s perhaps due to the speed. 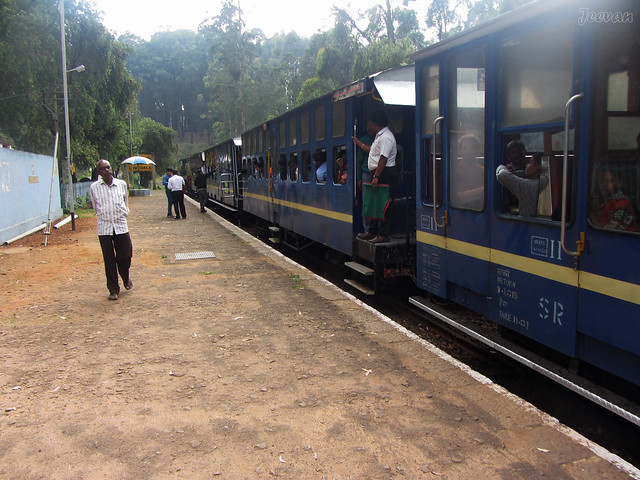 As soon the train moved out of the station, the guard went up a small platform on the opposite side and changed the track gear. In short time it started to drizzle and the entire ambiance turn wonderful and much lovely and I really enjoyed the moment from the station porch, where I found couple of house sparrows making way through the portico. Though I hesitate to look into the station master room, through the open door I able to capture the token instrument placed on the table along an old telephone. The Nilgiri mountain railway began its construction in 1886 completed in 1908 with the building of track between Coonoor and Ooty, where Lovedale is interlinked.

These are some incredibly beautiful and peaceful places.
I am so glad you get to visit these places in the Nilgiri Mountains.
Your photos not only show the natural beauty of the place, but also the relics of times past.
Lovely to visit you on this Saturday!
Happy WE, Jeevan!
Peace :)

So good that you are able to visit these places and get to enjoy the train ride and beauties of the places visited.

That is a lovely station!

I love visiting railway stations - stations like this one have a beautiful quaint atmosphere about them. The blue is so pretty - and what luck to arrive right before the train pulls in. This looks like a wonderful outing!

I was aware of Conoor and Ooty, not this one, although I have heard the name in some movies. Thanks for the info about steam rails still being in operation, nice to know you had a good time there :)

Happy Week ahead to you,
A ShutterBug Explores,
aka (A Creative Harbor)

Hello, it is great to see you at the station. Great snaps of the trains and station. Happy Monday and have a great new week.

I'm glad you were able to at least visit the station for this railroad. Hopefully you will be able to board a train some point in the future. The station is in a beautiful setting. The diesel engine is very colorful.

What a beautiful railway station. Your pictures are like from a different time, long past. I enjoyed them as well as your writing. I hope that one day you will be able to actually do this train ride.

The colors of the train and other things are striking agains the backgrounds.

I love old fashioned trains and their stations. In Japan they still preserve many which excites me like a child. You looked handsome in the photo.