We are left with just two weeks to move back to our native house, that we left 12 years ago, and as I told in a previous post, the renovation work of the house (mostly for the comfort of mine) is happening at full throttle and the next two week would be more tighten with re-flooring, repainting and furnishing of doors and windows and installing of hydraulic lift and railing of balcony. The rework on walls which means of breaking and building new walls at some places took last few weeks, though work wasn’t that large the civil workers dragged the job and we were disappointed at their service. Even the plumbing and electrical works, taking place right now taking heavy sum with little work and they were irritating all the days, annoys dad and brother who taking care of all.

In last 15 years we haven’t did any construction or civil work for the home, as we moved only buying an apartment flat and later shifted to rented houses, we are out of touch with the activities and familiar people who worked for us. Now we have to deal with all new people for each and every work and the local workers were a kind of lazy and frustrating fellows, so we’re sought-after other state people who come and stay over here for the civil work. Couple of north Indians stayed at the work site for a week and looked after the job but they too dragged the work at last when there wasn’t much to do. Actually we aren’t intended to change the entire house inside but things went out of control and as we hit a part of the house many things come to fall into restoration and it looks as if we are quite  reworking on interior. 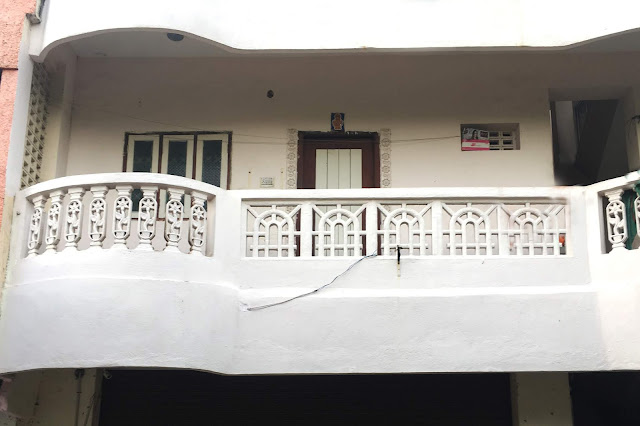 You could see the first floor portion we’re working on in the picture above and we’re changing the entire face of the house and the balcony jali or latticework was broken down to give way for the wheelchair and lift, and a new stainless steel rail is come up protecting the balcony and the window and door is also widen to let more light and wind enter the home. I would say don’t live in a house that has no windows and I’m someone who believes life begins only outside the window, so it was my wish to come up with big windows and a door to get in and out easily. And that’s all for now and I will post photos of the renovated house once work is finished.
Posted by Jeevan at 6:50 am

Remodeling a house over here is a long, tedious and frustrating process. It sounds as if it is much the same for you. I hope the project soon finishes and you are pleased with the result.

Happy Day to you,
A ShutterBug Explores,
aka (A Creative Harbor)

It will be good to return to your home. You have great plans and yes workers don’t get so excited about it. I had furnace put in for my older house and they got it in within two days, but I had paid them a lot of money for the job. It will be nice to have a lift for you for the balcony.

Remodeling is always hard --since once you begin --the job gets bigger and bigger... I'm sure it feels as if it will NEVER end.. BUT--it will, and I'm sure you and your family will love living there again after so many years....

Getting good workers is hard EVERYWHERE.. So many people these days don't want to work hard.. They want the money/paycheck --but don't care about doing a good job... SAD that our world/country has come to this...

Hope the work is done soon for you. It must be a little frustrating but all that will pass eventually when you move back in.

That balcony looks gorgeous! Here's hoping the work is finished soon. We're renovating the downstairs here at home and it is no fun.

Hello, it will be nice to return to your native home. I love the balcony.
Renovations are never fun, having good work crew is a must. Happy Thursday, enjoy your day and the weekend ahead.

Wishing you a speedy moving-in to the new house and expecting to see the interior pics :)

I look forward to the day your house will be completed with renovations to suit you. I agree that windows are important.