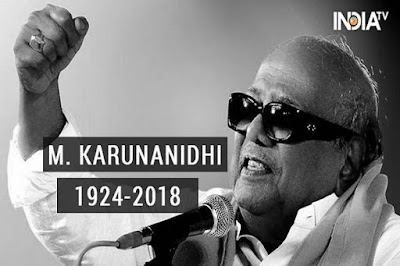 An unavoidable senior leader of Indian politics and 5 times Chief Minister of Tamil Nadu, legend Dr. Kalaignar M.Karunanidhi’s demise on Tuesday, at age of 94, put the entire state at hold. Renowned as Kalaignar is an exceptional, outstanding expert in Tamil linguistic and his energetic and enthusiasm about the language is indefinable and no one could be accurate as him who has written prose to “The Universal Scripture or Universal Veda or Book of all” – Thirukkural, written by saint Thiruvalluvar about 2000 years ago. The whole state of Tamil Nadu came to a standstill on Wednesday, the day his funeral processions take place, saluting the last legend of Tamil people as mourn to death. I couldn’t do any other activity on that day rather staring at TV, watching an ocean of people from various shores (including Prime Minster Modi and many state Chief Ministers) giving their final respect to the son of Tamil, while resting down on the shore of Bay of Bengal!

No wonder Kalaignar is one of my inspirations for writing! I have read and heard that he would write even at 2 am and continue to write throughout night despite his old age, it would feel inspire. When I have something to write or feel inspired to write, I would say I have எழுத்து பணி (writing work) if someone ask me what r u going to do and I would say this having Kalaignar in mind. His writing and pronunciation of Tamil is such prolific and best witnessed among the generation of ours. He may demise now but the impact he created through linguistic, social reforms and rationalism is going to radiate eternally. Kalaignar’s political activities began at the age of 14, when most of kids like to spent time with friends and look out for fun, and from an adherent to country’s top leadership his journey isn’t an easy thing and that too without having proper education his rise to writing text on Sangam literatures is absolutely a wonder!

His peerless knowledge and intelligence is a doubt that anyone could gain ever and his experience and hardworking attitude (even at age above 80) at other hand become great pillars that anyone could seek support and motivates a lot to generations across. My late great grandmother is an ardent of Kalaignar - M Karunanidhi and she had voted only for him (and his political party DMK) all her life. She believed only Kalaignar could do welfare to people and sometimes argued with us in supporting her leader. She also gets anger if we change the channels whenever he was shown in television. My grandma and Kalaignar are same aged people and she died exactly 10 years back at age of 84. Kalaignar is highly celebrated for his finer scriptwriting; screenplay and dialogues that many have become enormous success as popular dramas and cinemas while it’s still could be a challenge for any actor to perform or pronounce such nicety words and sentences.

Kalaignar was the only Indian leader to head a party (DMK) for nearly 50 years constantly and to win all the assemble constitutions (he has contested) without fail. His life is full of vitality and I ever seen a man amazing like him who worked all his life restless (similar the words etched on his coffin) to enhance the Tamil community and implemented schemes to put forward the backward society and equality for women on all platforms. He’s an ardent follower of his mentors Thanthai (father) Periyar and Dr. Anna Durai and executed what all schemes, ideas and dreams they uphold for the people of Tamil Nadu. He implemented the law for widow remarriage, equal share for women in the property of their parents, all religious people to become priest and redefined the terms for transgender and physically disabled (perhaps he knows the pain of differently abled – what he referred to physically disabled – as he himself ruled the state from a wheelchair during his last tenure as chief minister and till he was hospitalised) and he also obtained many rights for the state that the other states too enjoy, e.g. he brought the right to host the national flag by the state admiration than the central.

The thing that fascinates me a lot about Kalaigar M Karunanidhi was his consciousness and strong willpower and healthy mentality. Truly amazing, except the last few years, his exhibition of memories is very powerful and profound for his age where forgetfulness is common. During his tenure and wellbeing he often appears on media and sent messages with such nicety to his people and for a leader with busy schedules it always amaze me how he able to retain each instance of past with record. His retention was something belongs to himself alone and one can’t even imagine living that long with such perceptions! Indeed we miss a multi-tasking legend, who took the supreme power (sun) as his emblem, to work beyond twilight hours and midnight to the welfare of the Tamil people aka Dravidian. He also lived as an identity of Tamil Nadu. Kalaignar is the only leader in Indian history to do politics along with all Prime Minister of Independent India and Chief Ministers of Tamil Nadu. Though some have personal frustrations on him (including me on certain things) but those aren’t matter in front of his achievements, administrations, passion on literature of Tamil and scriptwriting, level of energy and extraordinary memory power and diplomacy in decision makings and rationalism all makes him a gem, even he hide away in the darkness of death, he would twinkle until there’s light on earth.

What I have written is nothing but what I observed and what comes to mind right now… and he’s an era which can’t be confined into a post or coffin!
Posted by Jeevan at 2:45 am

"...all makes him a gem, even he hide away in the darkness of death, he would twinkle until there’s light on earth."

Can see you have been contemplating this person ~ informative post ~

Happy Day to you,
A ShutterBug Explores,
aka (A Creative Harbor)

Wonderful tribute. He sounds like an amazing man and I am sure he will be missed. Enjoy your day and new week ahead!

A great man! Will be missed by many!

He was such a famous man and well loved by all in Tamil Nadu. RIP.