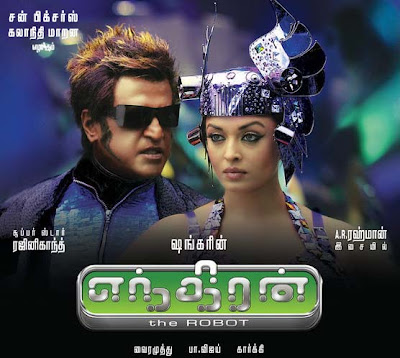 The Robot (Endhiran) is out in audio and it simply rocks more or less. First time listening I felt quite instrumental and sound of metal and its no wonder because music is by A. R. Rahman and to add sugar the movie is about robot, a mass made of metal. It wasn’t a great disappointment to me and I didn’t expect anything from the movie except it’s a Shanker movie. About the music ARR could have reduced the noise of instrument and avoid rap potion.
SPB, who is always fascinated to the introduction songs of Superstar, is here along with ARR and his daughter Khatija Rahman to call the New Man to earth. The song ‘Puthiya Manitha’ has given life to the robot!

‘Kathal Anukkal’ is soothing in the flow of Vijay Prakash and Shreya Ghosal! The song is energetic and charming to keep away the melody. Sure the picturesque would be very beautiful says the sample pictures in the lyric book.

‘Irumbile oru Irudhaiyam’ is so hot in Kash n’ krissy vocal and ARR has given good company in expressing a robot’s emotion and love. The song is rapid and the English verses have added attraction. I think the lyric book is given to understand the lines that goes immerse in music at many places.

‘Chitti Dace Showcase’ is head aching! A rap which has given way to strong instrumental esp. the drum beats.

‘Arima Arima’ has elevated the theme from the deep breath of Hariharan and Sadhana Sargam has done her brief part in sweet. The music has put a bravo walk in this robotic show.

‘Kilimanjaro’ is very interesting and Pa.vijay has played with lyrics, so playfully. The song has well rhymed in Javed Ali and Chinmayi voice and it sounds like a tribal song. It’s my favorite song in the album and seems like it was captured in a adorn manner. Aaha Aaha… and Heako ennikkoni… at the each stanza cause prettiness and add giggle to the song.

‘Boom Boom Robo-da’ has an excellent rhythm from the string and it sounds alike the Shivaji’s Athirade! The lyrics are well related to science and childish love and it was written by Vairamuthu’s son Karky. The female singers sound so hot and sweet to cause passion and romance.
Posted by Jeevan at 4:52 am

Great review. I am sure it is worth the wait.

WOW! I had heard of it but didn't know the details :)
Thanks Jeevan for adding it here...will look forward see it
Cheers

havent heard it as yet, but am waitg for the movie to release, tho I dont like Aishwarya

dear jeevan,
I have always thought that in A.R.Rahman's music the words are never audible.The song 'love panna thonalaya ' had such a good message asking all the youth to concentrate in studies and focus in career instead of wasting time in love but no one could understand it because of his music.He overshadows everyone and affirms his presence only.

Another great review Jeevan. Thanks for sharing. Anna :)