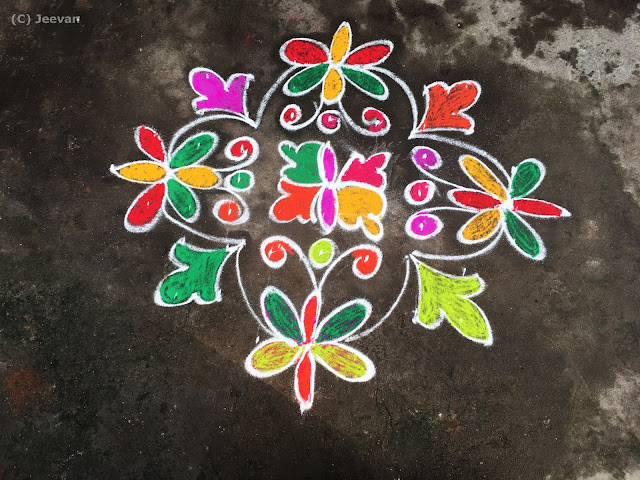 My aunt’s another colorful butterfly kolam from the Pongal festival.

Kolam considered an auspicious and morning exercise for women in general, as they bend down and connect the dots, they do some math’s blending the body and mind. Due to knee problems and space for drawing, keep mom away from following the custom, so my aunt takes care of drawing kolam daily in front of the house as we share the same gateway. Lately, there was a talk of keeping a maid to do the task daily on our behalf. Not every day we drew color Kolam; so, it won't be difficult in general, and many of our neighbors have such maids, who used to draw simple and same design as Kolam.

ohh beautiful made!wish we could have something like that in -norway too

It is beautiful! What is its purpose?

Your aunt is so talented. Thank you for sharing her Kolam with us. It's perfect for RGB Monday. I'm sorry to hear about your mom's knees. So glad your aunt can help.

Very pretty, I love it.

Hello Jeevan,:=) I remember you posting some lovely Kolam designs on another of your posts.They are most attractive, and it's a lovey tradition. Your aunt has a a lot of talent. I hope you can find someone to carry on this wonderful tradition, ...someone with younger knees!!

This is a very beautiful drawing. I think it would brighten the doorway of any house.

Hello,
Beautiful and colorful painting, you Aunt is talented.
Thank you for sharing the beauty! Take care, have a great day and week ahead!

Pretty bright colours, kolam used to be more popular here. It is not practised now. How sad

Sandi - Drawing kolam begins with the idea of feeding little species such as ants since kolams were traditionally drawn in rice flour. But, later kolams were drawn in power made for drawing, and it drew because it brings auspiciousness to the house or any event or occasion as we draw beautiful patterns and designs, and later filled with colors.