I have crossed the Veedur Dam several times when going beyond Villupuram on the GST road or NH 45 (or NH 138 according to Google maps), and I could only see a piece of the bank of the 4.5km long dam. I mostly took this national highway for long trips, as it is a prime road led to the southern districts of Tamil Nadu, and thus I never had time to stop to look at the dam as we need to cover long distances in travel.

I always have an interest in visiting dams and the Veedur dam was also on my list of visits, and I found that the extended monsoon season (post) was apt. to visit. Because the dam receives water only when there is a good monsoon rain, and following last year the dam had reached its full level again, and surplus water was released into the Gingee river. 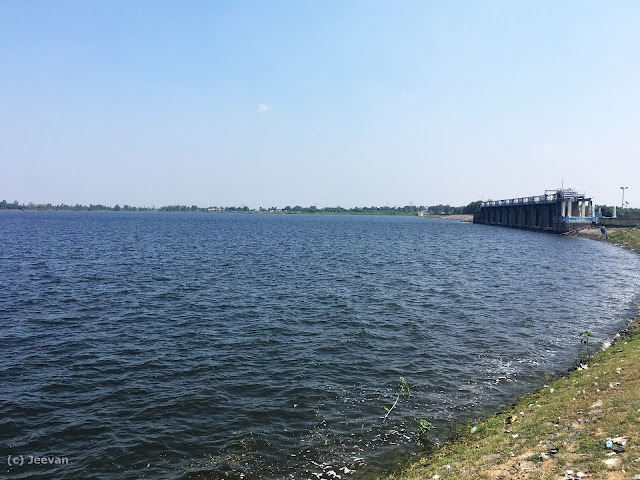 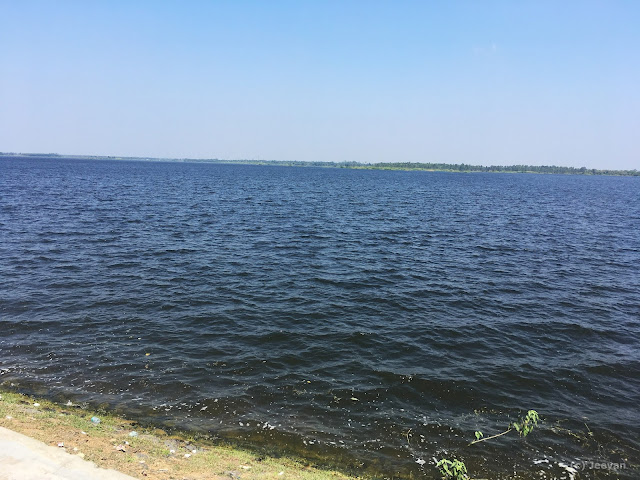 The Veedur Dam is about 150 km from Chennai on the GST road, and it is located right on the highway between Tindivanam and Villupuram and welcomes by an arch that marks the road leading to the dam and the park. Though the day was sunny, it wasn’t hot (thanks to the winter season and one of the reasons I chose to visit the dam), and the cool breeze was enough to create small waves in the water to crash like the sea. 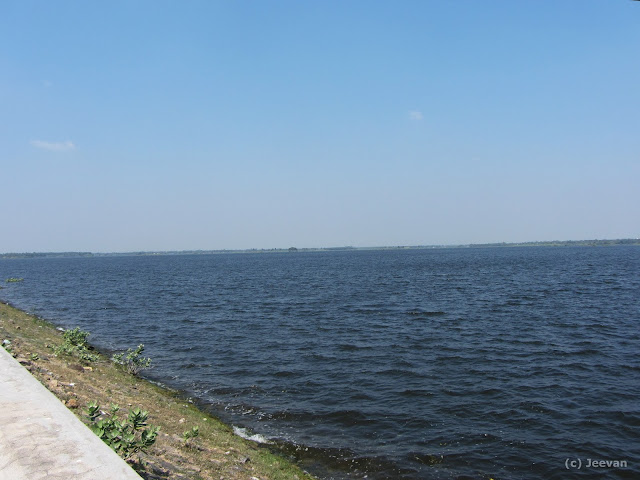 Since it was Sunday, some people had arrived on bikes and cars, but it was not crowded enough to scare us. There is a road to climb on the dam, though the vehicles are allowed only near the shutter area, it was more than enough for me to get the view of the dam. The water level at the dam was up to the rim, and we could see water spill out of the shutters (when we cross the downstream area) when the wind blows strong. 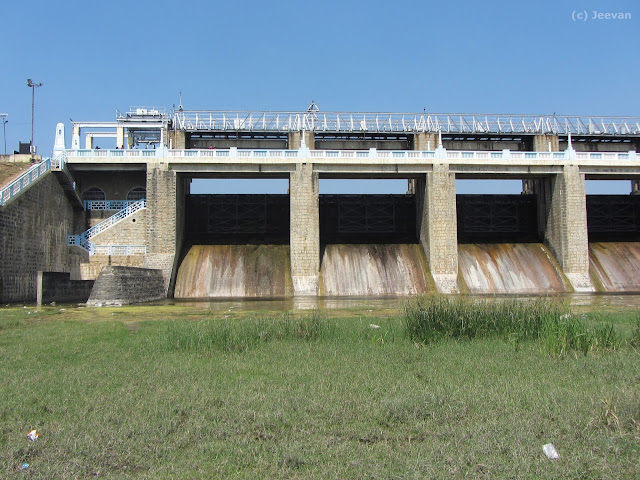 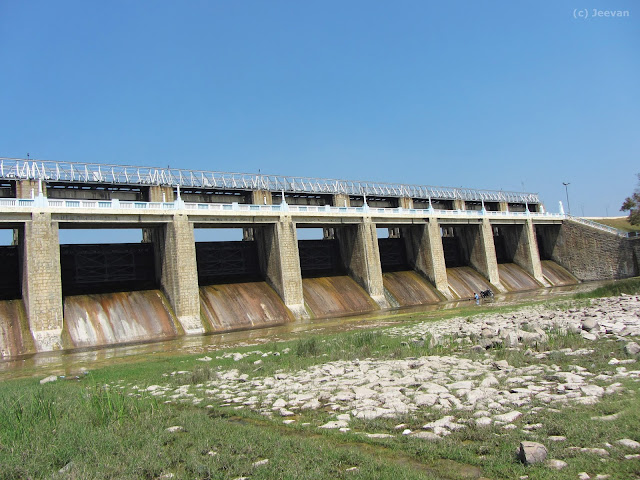 The Veedur Dam was built-in 1959 during the regime of K. Kamaraj, the then Chief Minister of Tamil Nadu and President of the Indian National Congress, at the initiative of Kakkan, who was the Minister of Public Works Department. Kamaraj, also known as Kingmaker, constructed many dams in the state during his regime, and each one of them was a marvel in engineering. And the Veedur dam was the smallest and last dam he constructed before the end of his regime.
The dam is built on the merging point of two different rivers, called Sankaraparani and Thondi, at the village of Veedur from where the dam got its name, Veedur Dam. The dam serves as a source of drinking water and agriculture for more than 100 villages, including Vikravandi, Mailam, Vanur, and Pondicherry. During the monsoon, the dam opens for irrigation of about 2,200 acres in Tamil Nadu and 1,000 acres in Pondicherry.

The total height of the concrete dam is 32 feet, and the earth dam is 37 feet; and among the 4.8 km long earth dam, only 430 feet is a concrete dam. Besides the 9 spillway shutters, there are 3 Tainter gates - a type of radial arm floodgates used in dams and canal locks to control water flow - which is something I find new. The dam has two little parks, one at the entrance of the road, beside the archway, and another close to the dam provides some nice shadows to the visitors and play area for kids.

I got to see the entire dam area and was pleased by the amazing sights of the countryside while continue to travel on the dam road. We will see further in the next post as this turned to be a long post.
Posted by Jeevan at 4:54 am

...it holds back much needed water!

Wonderful about the dam and lovely photos of it ~ Glad you got outside again and shared your wonderful photos with us ~ thanks,

It's great that you got to visit the dam. Thanks for sharing some of its history, it was interesting to read.
enjoy your weekend!

Thank you for sharing your photos and the interesting details of the dam. I'm glad you got to visit it and take us along with you.

Pretty views of the water! It is great you were able to visit the dam.
Thanks for sharing! Take care, enjoy your new week!

Wonderful sights... maybe they should build a larger park and include more entertainment amenities. If possible, show some pics from the park in ur next post..

Good to see so much water in stock..

So nice to see the water especially when our weather is so hot now. I have been sweating like in a sauna.

Hello Jeevan,
I discovered your comment on the blog Breathtaking, I liked it and I was curious. I also like your self-description very much, it sounds modest and wise.
Now I see that you live in Chennai - my husband and I were there during our trip to South India in 2013. We liked India and its people very much. (We just didn't like the garbage we were confronted with at times. I think If you love nature, it probably hurts to see all the rubbish in the meadows ... Isn't that so?)
We didn't get to the area where the Veedur Dam is. Very interesting.

I would also be interested in how life in India is now because of the Covid pandemic. Do you have big problems and limitations?
All the best from Austria
Traude
https://rostrose.blogspot.com/2021/02/ausflug-in-den-nationalpark-neusiedler.html

Rostrose -
Hi Traude
I’m glad to hear from you and thank you for writing on what you liked in my blog. It's great to know u visited our city and being frank about what you liked and not. Of course, as a nature lover, I hate the attitude of our people throwing trashes wherever they think and uncared about the plastics destroying the ecosystem. Whenever I go out, I keep an eye on my family to prevent them from littering but it happens sometimes beyond my control.

Btw. The Veedur dam isn't that popular or an important place to visit other than those like to visit for a day trip. I hope you enjoyed the places in Chennai from your trip. Pandemic really hit us hard and for 5-6 months, when the spreading of the virus was at high, personally we lost the income for those months, but now the situation is almost back to normal and other than limitations for public gathering the lockdown is relaxed almost. Except for the states of Kerala and Maharashtra, the pandemic situation is almost under control and daily counts were about 10000. Hope you and your family are staying safe in Austria.

Thank you again for the visit and comment :)
Take care

No water over the spill way until the rains come. Good to see your shots.