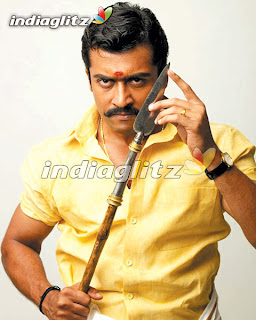 Its better I conform it was not a Vijay film! Punch dialogue is punching much at the beginning scene of Vel (spear). Usual double role subject, but new to surya after the average success of SOK. The story narrated from a train journey where a parents lost one of there twins and both grown in a different places. Younger one working as a detective office, living with parents and elder one as brave hero in a big family at a village near Dindukkal. Without any confusion the screenplay played well showing the two environments in very neat manner, where saranya the mother of twins always with tears and thinking about his very lose son gives a usual distress felt when will skip to another scene. Even there was no bright romance, Asin comes beautiful, charming in that stylish glass with a cleanly washed face helps to know about elder surya to younger. Where the highlights of the chasing comes when the villain’s group attempt to kill younger one who looks alike elder Vel and the bus busting and rising up to meters high and crashing on the ground is unneeded but amazing, where in next time it wont wonder even if they rise the train or flight to meters high.

Naasar comes littler when adopting his found son vel and to introduce the opponent Kalabavan mani in flashback, where the enmity continues till vel generation. The race between the villain and hero comes forward; back on exchanging loses, when only after vasu (younger Surya) enters, it pickups in a different interesting intelligently move that was in impersonation of elder as younger. Kalabavan mani tries to kept a separate place for his humorist villain. How does the both solves the problem of mani and the sentiment between the lost and found family of elder son vel was said in family affection and very fast last with action is what takes the film without boring and it was the pulse of director Hari. After convinced that the story tells don’t sharpen the sword, sharp your brain then why the director gave a violent in climax with villain disputes.

I expect always an interesting and positive movie from hari, but if he reduces the more weapons and violence it suits for a whole family drama. About comedy, where our southern storm vadivelu binds with his attractive and simplify, but his usual stupid way of losing things is like painting with empty brush. Elder surya shows his last six (Aaru) face in single frame and younger one have to be balance of smart SOK look. Songs are rural touch, Kovakkara Kiliye… is most beautiful in all, the backdrop and countryside’s are fresh green and blue are soothing to vision. Aayiram Jannal Vedu …gives an idyllic feel; it shows the happiness of a joint-family. In the intro a thought, it would be attracting between people if this was a release for pongal. Yuvan’s music at background creates flurry at action sequences, but i felt as he have used his old tunes in songs, where from his last village based movies. Surya had tries to copy his bro karthi’s renown in this film, but some how that scene got whistle from audience. The cinematography is better in quality, the cameraman V.T Vijayan gives a force in action and slower in sentiments, in Tamil industry he is one with not grand, but best.

I hear vel is a well doing film in diwali releases. After Arul the old movie of hair, it happens that I have been continuously watching his films in theater. This time it was the rain disturbed for few minutes and the sea breeze lift ups the mood except watching film at drive-in.
Posted by Jeevan at 4:32 am

Honestly I doubt whether I will ever watch this movie ... as it is my romance with television and films is seeing a very torrid time ... but i enjoyed reading the review

Hi jeevan... What a coincidence!!! I think u beat me in writing a review for vel.. But, I dint like the film much.. My review is in ma blog... do visit and comment if time permits.. Thanks for the same... and btw, if u can, kindly add me into ur blogroll... I too hav done dat... Thanks again...

sounds like a movie i don't want to watch - thanks for the tip off, buddy Jeevan!

just watched ATM sterday. not sure if will watch Vel though..

last week, i too watched dis movie in theatre. its so nice dat i enjoyed it from starting till end. very interesting dat i dont know hw my time gone there....

Jeevan -- Nice review. I am doing good. Long time no see. How was your Diwali?

He is a good actor. I watch few of his good movies.

I have changed my blog urls and check my profile Jeevan.

Alok – Thank u so much for spending you times reading on buddy :)

Vijay – Thank you! Work is much to do, will add u at my friends list and sure will check-out you post soon buddy. Cheers :)

Ammu – how was ATM dear?

Kalai – friend we both have good taste at watching vel;) the movies moves very fast isn’t it. The first scene was really effective, the action song, the line of Lorries following is superb.

Truly yours –Hi buddy, I am doing fine and diwali went beautifully :) Thanks for your visit.

Priya – I agree. Thanks for informing priya, will correct it in my setting too.

ya... we both have good taste at watching vel. truly... it moved very fast than shivaji (sorry). i really enjoyed it especially Vadivel comedy...

"enga ooru erumbu kuda kadikaathudaa" it gives a nice feel of wording. me too happy for sharing with u and all.

Hopped in here from Vinesh's pages. Nice blog. Regarding Vel, all I can say is that "it was too blunt" :) I wonder why Surya accepts to do such films. Btw, if you want to how ATM is, this is what people say -- "Avoid This Movie" :)