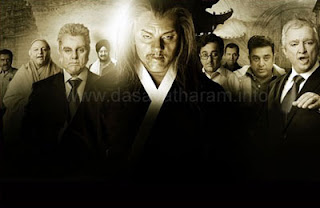 Actually I was thinking it must be some usual film with hero impersonate in different getups. But no, I am almost wrong in guessing the film and felt surprise at each and not even to think it’s a universal actor behind those easily sighted odd figures. I sense here, where in any place can’t feel the other person is same. Only to think, I wonder at this great fantasist film in his sight changing. Have seen more films under this category, where each character would have some similarity and to be easily identified, but Kamal Haasan has done a great job in Dasavatharam taking away most important character as him and aside proving there needs an actor not the face.
Taking inches of a blue tube spreading virus, Kamal staged all sorts of entertainment and actions. To mention importantly the chasing scenes which are more powerful and grand alike comes in Arnold and Bond films. The flying helicopter in chasing and gun shooting action sequences are like Hollywood quality, which is something new for Tamil. For nearly half-hour there was the confusion state of what is happening and the disturbance of US language and unclear subtitles after the rare piece from the history. Further it slowly gets into the track and surprise at each characters affiliation into the story. Especially the Balram Naidu the one in his voice and body language expressions stands still in mind, the way he makes laugh as investigating officer and in chasing scene was well funny. And the second most liked character is the 95-year-old women. She not alone makes fun and also touches with the innocent inside her. This must be difficult one, well kamal shows how talented he was in bending to the figure and expressing to the nervous vibration to give a real effort. A great attempt!

Back to the 12th century of empire period, we get to see a strong and bravo Kamal as Rangaraja Nambi who tries to stop the Chola King destroying his believable Vishnu Idol from the temple. It was such a grand venture with pictorial excellence merges in real and graphical along with the music to tell wow fantastic! The bad ex-CIA officer Fletcher nearly comes equally to main character and it stands on screen for more than the character on the perfect makeup one could challenge. As up to a point I can’t identify it is also an avatar of Kamal! The Japanese character and President Bush, visible the mask fixed on face though it was nice and I see those are just to add the avatar. And the naughty monkey’s end in the lab and in climax same happens for the ex-CIA is something aversion. 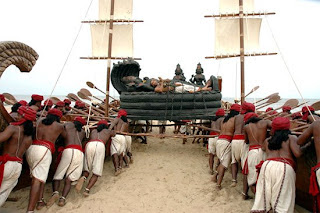 First time watching the songs, what exist in mind thinking past comes down little. The song Oh... Ho... Sanam presents the effort its courage and excellent dance moments and the beautiful pair Jayaprada and kamal. Mukundha Mukundha is the all time comforts in mind. The pictorial was enjoyable. I feel, without Asin (heroin) it won’t be at all nice and her innocent anger and get on saving her perumal idol she feels lovable….. None other than her can be imagined filling the character of Andal, loving Perumal.

‘One, who is unaware of this film and Indian cinema would really get wondered by this film and our actor,’ is what am tell to dad while returning from drive-in. Oh, it started to pour heavily after by interval to put us inside car to watch in mute for sometimes where it incompletes the dalit social worker enters in stiff dark face and eyes. Kamal shows a very different voice here! If one misses the end song is missing the worth of the whole creative and hard work at every characters difference. I wonder why some people tell this film is waste and Shivaji is best, but for me it’s excellence in feeding advance and showcase talent. What gives disappoint is the disappearance of the very early 12th century and left untouched then. I can’t understand what relates this to the narration and what the idol exist in last tells. And what not, he brings a bunch of actors across and used as per adding sugar. The tsunami was a real fantasy more than the only few scene remains then which is one mainly expected. For every question of the character they answered in end. Little disagree may comes on expect, but just comes by gives great amazement which I get watched.
Posted by Jeevan at 3:16 am

does it have spoilers....i dont want to read any review...lol :) I so badly want to watch it...but when there is time there is no ticket and vice versa

I did watch Jeevan and leave out the story and we shud accolade for his brilliant performance.

Alot of ppl told me NOT to watch this cos it's crap etc etc.

Good review by u Jeevan. :)

I was enthralled by the first 15 minutes and wished it would continue. I enjoyed it too.

Nice review buddy.I guess you really enjoyed the movie.But all my friends told not to watch it!I guess it's up to individual discretion,isn't it? :)

your review is good, but unfortunately I did not like the film

Haven't watched that movie...wish I understood tamil coz ter are so many good movies that I wld love to watch!

Hope you teach me some day brother LOL!

now i need to watch this movie man..

GP – thanks bro, have fun with you car :) take care. ya it was a nice entertainment, don’t miss.

Vishesh – is in how u takes it. You r so right, if u go unexpectedly, u enjoy the whole. Have fun watching :)

Priya – absolutely buddy, I know u watched it earlier than me :)

Keshi – It’s an entertainment. u must decide to watch or not, what I say?

Shiva – Thanks buddy. I too wished it extends…

Sameera – you’re so right, there is nothing necessary that all thought to be same is it? I enjoyed buddy, hope u too will :)

Meghna – I think it would be releasing in Hindi transcription soon, so u may understand easly. So sweet dear, let’s hope :)

I have heard a lot about this film & now nice reading your review...would be interested in catching up if I get the chance.

good review Jeevan .. I doubt whether i will ever watch the movie, but now I know wht this movie is abt :)

yet to watch this movie, so it is aa nice movie then