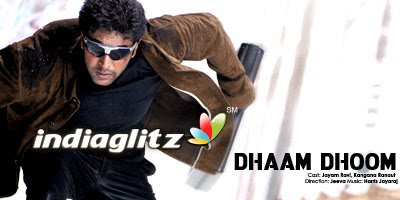 A beautiful display of firecracker with sound… dhaam dhoom! Another quality movie in my view.

The plot is how come an Indian doctor caught into trouble going to attending conference in Russia and fought to return from a country of unaware language to hand locks his sweet-cute-heart in India. In-between the memories past encounter his girl and explore desires. It’s a visual treat from late Jeeva and a step further to actor Jayam Ravi, he act, fight, and dance well, success out of his homemade movies. Heroine Kangana Ranaut stole heart in her beauty along with the countryside scenery. It’s opened into grand and put on fast track and soon the Russian model smile understands where the movie moves. We can’t expect anything than better, Jeeva tries giving a Hollywood flick in touch of Indian moviemaking. As much the story centre to Russian incident, there is nothing strong expectation in love struggle and village attention. Being a village girl, casually bind with hero at first sight is striking somewhere and the usual naughty girl playing in street with children (what can expect then).

Lakshmi Roy just used to run with him, and whatever the idea is made by hero. Jayram turn to be negative, but the secret doest interest the mood into thriller and it tires simply searching the tail to head. There is something I don’t know why the Indian flag left behind when Ravi fell under bullets and what I expect the usual logic and helicopter chasing is missing. Many scenes where just moved from English movies captured in and around St.Petersburg, but the countryside of pollachi is refreshing. Some character are nothing to do in add frames, Ravi’s friend seems director to have a fortune touch of his preview film. Jeeva was not to think before Unnalea Unnalea and I really get confused at his debut to think his route is not for us, and I like him as cinematographer after Run. The background scoring has a good effort, a kind of action and a picture to watching in theater to enjoy visually. 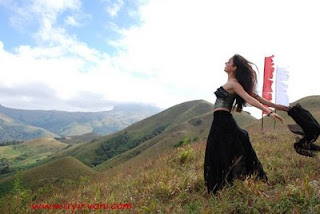 Songs are top of year already and the picturesque are such lovely! Anbe En Anbe was stunning in the background of beautiful coorg and the girl. I wonder how come my favorite song Azhiyela mukkulikum azhea, as well its lines it kept poetic touch bind within Innova car. Thikku thikku is a pub song; few fast choreography and Pudupudu… have some dhaam dhoom beats striking in digital sound, getting away the words. It’s a lose of director who see and reflect the beauty through his camera technically as well differently.
Posted by Jeevan at 8:59 pm

I havent watched a good Tamil film in a very long time..must watch this film at least

That seems to be quite interesting movie. Thanks for sharing Jeevan.

yet to watch this movie...nice review ya..

Hi Jeevan,
I always like to read you review. You have a a beautiful, interesting style of writing.
I'd like to watch this movie.

Have a wonderful time, dear Jeevan!

I havent watched a good tamizh movie i a long while !

I am hoping they would get one out soon !

Thanks for the review Jeevan sounds interesting.

cool review jeevan, jayam ravi is ok. the songs r nice too...tamil movies has come a long way. hope it could b better in the story, screenplay department.

Will watch soon. Thanks for the review

Lakshmi – sure watch, its beautiful picturesque.

Resonator – Thanks, have nice watching :)

Krystyna – Thanks so much dear, happy weekend.

Kavi – hope u get some film interesting.

Jeeves – thanks, hum… is a great lose to his family.

I watched this movie this Saturday. Not bad I thought, Though I thought some scenes should have been better. I think your review is appropriate.