Into the wild - Mudumalai

About 10 in morning we were waiting at the Ooty Collectorate, on the recommendation of one of dad’s friend to get official permission to enter the Avalanche forest to led up to Upper Bavani backwaters and dam. But our bad chance the DFO had been on off-duty that day and being promised by the officers to get permission for next day, we decided to check the Mudumalai Wildlife Sanctuary which is about 60km from Ooty, which we have planned for other day.

I have passed Mudumalai Wildlife Sanctuary and Tiger Reserve couple of times over visiting Mysore and one of it at night; but this was on a bright summer day last year and it was such hot as soon we climbed down the hills from the very pleasant weather at Ooty. The cold breeze was brushing us against seeking some warmth while waiting for the response at collector office, which has some tall pine trees adding some more chillness. 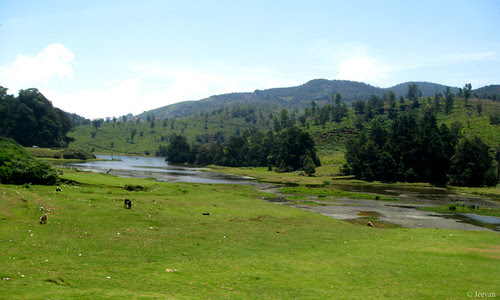 We had some wonderful sightseeing driving down the winding road, stopping here and there for some shots and the above photo was on a small lake-come-check dam we passed and being summer, there isn't much water in any lakes or dams around the Nilgiri. While the condition on hills where like that, the plains doesn't need explain. But it was incredible hot even at Gudalur above 1000m MSL and we spent some time there getting our lunch packs and moved into the wildlife sanctuary, welcomed by an arch.

A part of our drive into the sanctuary was under scorching sun and we couldn't find an animal until reaching the Theppakadu – the head of the sanctuary, where the tourist activities hold around. Since it was summer and prevailing to drought, the sanctuary was closed for visitors taking safari and staying at their forest guest houses. We decided to drive on the National Highways that cut across this National Park, until the Tamil Nadu State boarder and while driving back to Theppakadu we found an adult bison (Indian Gaur) climbing down a mound, apart grazing. 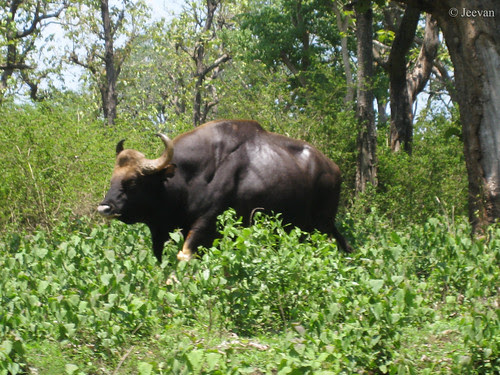 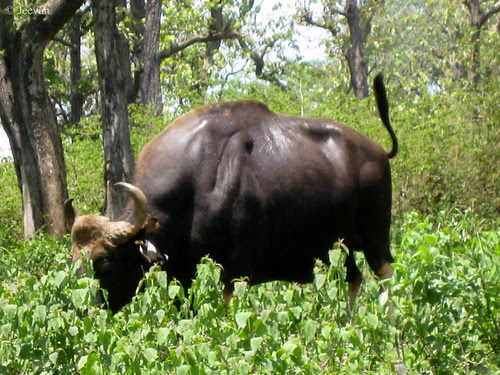 The bison moved like a boulder, imposing to muscular body. It was the only so wild animal we found other than spotted deer and Gray Langurs. We also come across a Kumki (tamed elephant), carrying some green bushes in-between the tusk and trunk, drive by a mahout sitting on its top. During the month of Nov-Dec, the state government conducts refreshing camp in Mudumalai, which brings many temple elephants from across state to the permanent elephant camp in Theppakadu. But only this year the camp was shifted to the bank of Bavani River near Mettupalaiyam, to avoid giving trouble to elephants drive through Ghat Roads. 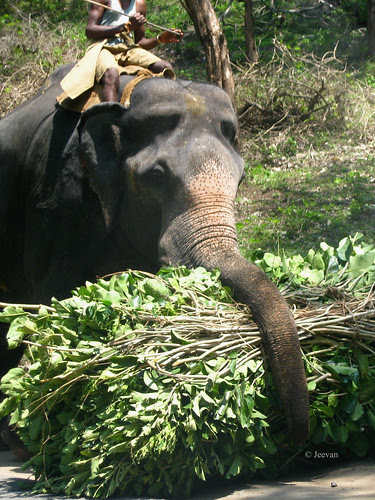 Even the wildlife sanctuary’s safaris are closed for visitors; there are number of private jeeps available to take us around the park, by certain routes allotted for them. But avoiding them, we head to Masinagudi. My bro had been there for two times and befriend with a jeep driver, so we called him to stay up there who was on a safari and before he arrives we had our lunch on the outskirts of Masinagudi and also drive up to Singara, looking for animals on either sides of the road.  Singara is where the Pykara Hydroelectric Power Plant is located, which brings water through pipes from GlenMorgan Lake at a height of about 1000 meters.

I know it wasn't easy for me to board a jeep, but wished to see what type of jeep it was and convenient by chance. Regrettably the jeep doesn't show any kind towards me carrying on, unlike the jeep guide who comes forward to take us via roadways in our SUV. The wear out tires refused to give me even that chance because it may take us through rough terrain.

For the back drive we took the road from Masanakudi to Ooty, which is an endanger route to drive past sharp hairpin bends and road climbing steep. Initially we took this route way back in 1997 to reach Mysore, unaware it’s endanger then we never took it later and only this time that too for climbing up and not down. The friend who drove the car was an experienced one and has been taken this route early once, decided to make a very careful drive and safe passage. We stopped at the Kalhatty fall and checked the view point, which shows nothing but a tract of wet rock.
Before heading to Kotagiri, we made a visit to my friend’s house at Ooty and he being busy with his house under whitewash, we couldn't spend much time and also needed to check with officers at Collectorate about our next day visit to Avalanchi. Gladly we got the permission from the DFO, who was back at office in the evening, it was very exciting how the day gonna break tomorrow leading us to road less travel – which is another venture, for another day to share with you all.

that bison is so beautiful! muscular!

You've got so many lovely photo's here. It's wonderful to be able to look at the world that someone else inhabits.

Wow - what a great place! Fabulous shots - that bison is huge!

The bison is majestic. The photo of the langur has been taken very well. Hope to see more photos of animals/birds in their natural surroundings. I prefer them being in sanctuaries than in zoos. We should look at slowly abandoning zoos and creating more natural parks where animals can go around freely.

nice photos Jeevan and a good writeup too.

The backyard of my home! The place i love so so much! Thank you so much for posting this!

Wonderful images from the wild. That bison is muscular.

As always excellent pictures and very clear descriptions to match them, Jeevan: I particularly liked your lines on the bison and your general description of the pros and cons of being on a journey like this.

Your writing itself is becoming more beautiful by the day. I congratulate you on your perseverance :)

Nice captures of the beautiful place:)