It’s always exciting exploring a place, where the road less traveled and not many foots imprint the soil and cameras stole the scenery; an environment rich in flora and fauna as well pleasure where not many virtual developments take place. Remote from the tourist sight and protected by nature, Kukkal is not so far from the crowded Kodaikanal, the hill station that losing its spirit and pristine beauty unprotected from becoming a quite concrete jungle.

During my vacation at Kodaikanal, last summer, I explored this little paradise called Kukkal or Kookal on the Western Ghats Mountain range of Palani and about 32km from Kodaikanal; the place is so blissful with tranquilly lake and sleepy village atmosphere, comprising shoals and grasslands adjoining the terrace farming. Nestled near the northern ridge of Palani Hills, Kukkal is notable for the high biodiversity of the area and fascinated by frequent mist and rainfall, which account for large variations over short distance. 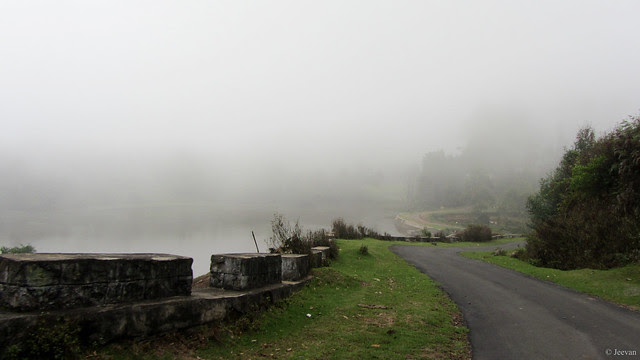 Riding on the Poombarai road after certain distance, the mist began to block our way, delighted as well become obstacle going through its dense and even I have travelled on this road once, I’m only familiar with its route map in Google. :D We were traveling on two cars and since I only know where to turn, my uncle left our car to first go – even he was to Kodaikanal many a times, never know this place until I located.

The road to Kukkal is a narrow one, turning on the second left from the road to Poombarai village; the tar road seems relayed by rusted leaves and tall trees standing besides as festoon and green pastures enticing the sightseeing. The road winding down near the Kukkal Lake was very beautiful; alongside the view of the mist floating over the lake was awesome… The lake is the main stream source of the cultivation, even though it doesn’t look clean, but with overall sight of mist and mountains background it was astonishing!  Well I don’t need to say much of the lake, since my photo captured it all to you viewer’s amusement. 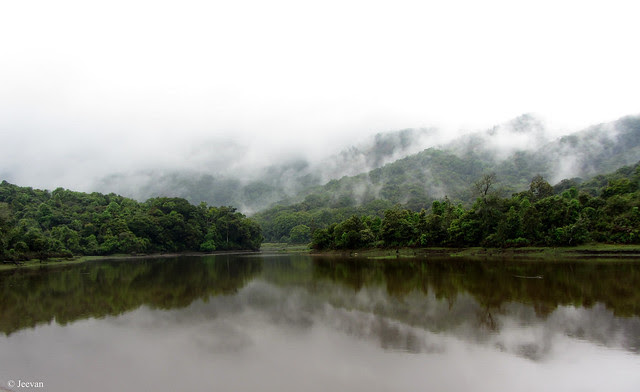 There was a Little Grebe swam across the lake leisurely, creating mild ripples tracks which I thought first to be caused by some insects, but only later zoom in on I realize it was a small water bird ‘Dabchick’. I spent only a brief moment on the power wheels (chair) moving on the Lake Bank or road, the mist turned abundantly gray began to rain nonstop leaving only few minutes gap before we leave the place. My cousins, who tented on the green patches opposite to lake, couldn’t withstand the density of rain and leakage in the pretty blue tent forced them to take their seats inside the car, whom enjoying the pitter patter of rain and warmth inside the tent.

Knowing there won’t be anything available to have for lunch, since it’s a remote village and except Kodaikanal there isn’t a decent eat out or affordability around the hills,  so we took ‘cooked rice and sambar’ in hand from our home stay and planned to buy chicken and make fry on spot visited. Though we enjoyed the hot spicy chicken pieces, the rain restricted us from experiencing a quite zeal and destroyed my plan of exploring the beauties around the place on my own wheels power and giving pose in front of those unlike my cousins! Lol 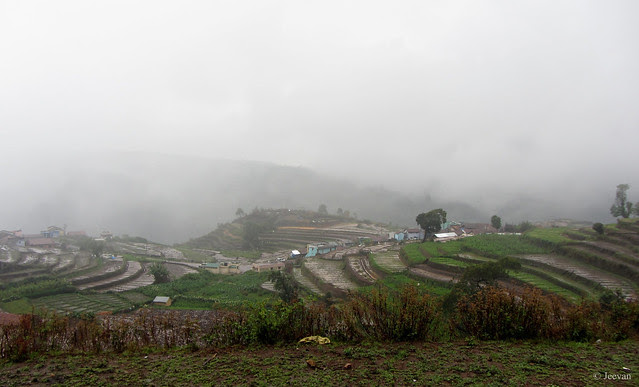 The lake located in a valley, has cultivation lands from its lowest to higher elevation; and except the monsoon, the terrace farming happens with the catchments of shoals around the lake, which is also a basin for Kudiraiyar River that flows through Kukkal. We rode few meters on road above the lake to check the Kukkal village; even while it was raining we tried to get a glimpse of the village that taking a nap under the mist blanket. Since being an afternoon, there was no one around to receive us but the stair cultivation and its texture were amazing, and I feel glad seeing them very close unlike the distance views of Poombarai and Mannavanur.

There’s a lot to share about this place and plenty of beautiful pictures hold to cherish this charming and fascinating location, filled with picturesque scenes; I don’t want to mess up this post writing them all in a single attempt and crowded with pictures. I captured few photos at 16.9 ratios, to get wide views on slopes and mountains and I recommend this place only for those seeks tranquilly and unwilling to spoil the pristine beauty in name of tourist. (My blog header is also belongs to Kukkal)

sorry about all the rain, but the reflection shot is gorgeous!

your narration makes me feel like as if I myself had been there.Nature is nature. Any number of A.C machines cannot bring this pleasantry
karthik+amma.

Beautiful and scenic, nothing less than paradise on earth.

Your photos of the misty lake and countryside are absolutely beautiful. It's getting harder and harder to find unspoiled pieces of paradise like this, but it's marvelous when we find them.

I have been to Kodaikanal and i love hill stations, your post made me feel like going again.

I heard that even Valparai is very beautiful. I was close to it, but didn't get there. Next time, I should. BTW, the photo of the lake is too good!!

What beautifully dreamy shots of the village and lake in all that mist!

Thanks for the info. And, thanks for sharing these beautiful pictures.

Its a paradise. Thanks for sharing Jeevan.

thanks for sharing these wonderful pics jeevan, you reminded me of two decades back when i had been to kodaikanal way back in 1989.....it was such a wonderful trip....:)

Thank you all very much for the present and comments :)

DI – Valparai is a wonderful place and always close to my heart. It is also called as 7th heaven. There are so many places unspoiled... Thanks to the lack of tourist facilities.

Ponniyinselvan – Yes, nature is nature. Nothing can defeat it in offering pleasure. Glad my narrative makes u feel alive :)

Renu - Hill stations are generally pleasure to visit and Kodaikanal is so wonderful but nowadays its nature has been turned into concrete jungle… except staying, the real spirit of it split out of the town.

Beautiful place. Love the photos. thank you for sharing info about this place.

Are there any places to stay in kookal?

Anush - There's no place to stay at Kookal, but there are couple of resorts near Poombarai including club india.