Expectation is something we can’t avoid, however; even we get frustration sometime going overly anticipating. So was a film was wonderful, the anticipation happens robotically towards the filmmaker’s next venture and there’re only few in the film division whose makeup lives up to the feeling and enhance and embrace close to the heart.

From the time the movie was entitled, the anticipation began; since the movie is based on things I’m passionate about – nature and wild, how can a tamed elephant story become exception? Kumki is a Tamil name for the captive, trained Indian elephants that are used mostly for taming and training of newly captured wild elephants and also to lead away wild elephants that stray into human settlements. 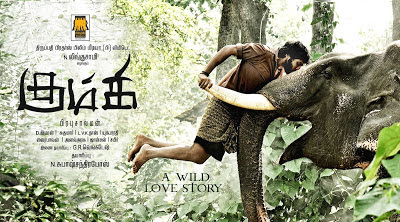 Prabu Solomon, the director of the late fascinating film Mynaa has come up conjoining nature and music side by side, comprising romance and thriller leading the movie to emotional core. Set in a tribal village, which faces the stroke of wild elephant and lose of lives hires a trained elephant to tackle the tusker that threatening their lives and livelihoods; the mahout who falls in love with their tribal girl decided to stay there with his show elephant, which doesn't trained to combat a wild elephant. But how come he manages all in spite of love and venture on tusker; embark on an adventures ride.

The grandson of Sivaji, Vikram Prabu doesn’t let down the pride of greatest actors of all time, portrait as mahout perfectly, conveyed almost inherent of the character that distinctly noticed. Being a debut actor, his unfamiliar face is plus and Lakshmi Menon strikes through her cute expressions even expose to tremble, beholds a perspective native tribe women. The film was throughout fascinating and Thambi Ramaiah does a mainstream humor and character vise manipulate. The head of the tribe village is also a notable character.

There’s a lot to experience in the film which visually treat and sound track creates a vibrant and alive moments esp. the Jog falls sequence was stunning and an ever seen scene shot on the screen. Terrific! I really need to mention about Music, which is the heart beat of the feature film and songs are quite intimate with the scenes and no where it feels off track or disjoined. The scenes related to elephant destruction and battle are created through graphics; but the way u look into the screen will animate and the real elephant Manikam was truly admirable and being the largest land animal, its behaviors are very childish and creates a sympathy over its disposition.

I need to say the Kumki (movie) was completely blissful and worth watching! Get ready for a lovely experience :)
Posted by Jeevan at 3:24 am

I am not watching any Tamil or regional language movies these days. That's mainly due to the high emotional quotient in these movies. If this movie is fine, then it's good.

This sounds like a very moving movie. I'm glad you enjoyed it!

Thanks for sharing this info. Shall try to get a CD & watch.

So glad it lived up to your expectations!

Thanks for the nice review. Looking forward to seeing this movie.

what is the meaning of Kumki?

looks like i will watch this one.. thanks for sharing one...

It's wonderful that the actual experience of this film matched the expectations you had for it.

Good review of the movie.

Can't wait to see the movie. Thanks for sharing.

Another good post, Jeevan: and you do seem to have a taste for slightly off-beat subjects when it comes to films, which is quite refreshing. :)

Having been away from Tamil Nadu for over half a decade now, I do not watch a lot of new thamizh films. However, it is good to note that there are directors who experiment, and give their own individual expression through films.

This one does sound like a "lovely" ride as you point out. And, yes, I liked your reference to the fact that the songs are woven nicely around the story - and do not appear to be intrusive. I personally like songs - as well as comedy - to be that way as well.