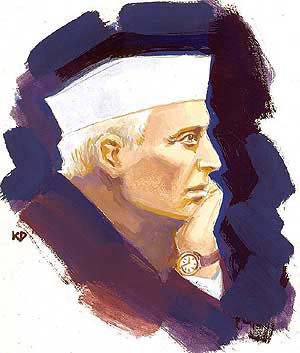 
November 14 is celebrated as Children's Day. Pandit Jawaharlal Nehru was born on this day in 1889. He was a great statesman and possessed a remarkable, charming and multi-dimensional personality. His affection for children was well known. Even in the midst of a hectic and relentless schedule, he always found time for children. He liked to mingle and play with them. They enjoyed his company as much as he enjoyed theirs. Every year on November 14, he used to meet many children at a mammoth rally. The children affectionately called him Chacha Nehru.

Nehru was born in an aristocratic family in Allahabad. His father, Motilal Nehru, was a lawyer and freedom fighter, and his mother was Swarup Rani. His ancestors were from the Kashmir valley. His father engaged Brooks, an English tutor, to coach him at home. After his early education, he went to England for further studies. He was educated at Harrow and later joined Trinity College, Cambridge. He was in the college for three years. At the same time, he came under the influence of socialistic ideas, the impact of which shaped his future political philosophy. In 1910, he graduated from Cambridge. He wanted to follow in his father's footsteps and joined the Inner Temple, London to pursue studies in Law. In the summer of 1912 he was called to the Bar and in autumn the same year he returned to India and joined the Allahabad High Court for legal practice.

He joined the Congress and was influenced by nationalists and freedom fighters like Annie Besant, Balagangadhar Tilak and Gopalakrishna Gokhale. Later, in 1916 he met Gandhiji who soon became not only his mentor but also his friend, philosopher and guide. Gradually, he was drawn deeper and deeper into the vortex of the freedom struggle.

The British imprisoned him many times but his jail terms proved a blessing in disguise highly productive in terms of creative writing. During his stay in prison he wrote Glimpses of World History, Discovery of India and his Autobiography. He presided over the destiny of India during the most tumultuous and turbulent period of its history. The post-Partition communal carnage witnessed unprecedented violence and mayhem. As the Prime Minister, he faced the greatest challenge of his life.

But he deftly handled sensitive issues like Partition of the country and tackled critical situations with a fair but firm hand and the nation, as Gandhiji had predicted, remained safe in his hands. He died on May 27, 1964. Though 40 years have elapsed since he left this world, Panditji continues to live in the hearts and minds of millions of children across the country.

Sorry Prathap, i dint read any new joke that's you i cant write, here is a Joke.

Joke - Ganesh: After telling, that your father is a Minister, Why the dint give you a seat in collage?
Dinesh: I asked a seat in Girls collage.:)

belated childrensday,thanks for the joke

Happy childrenasday friend. Thanks to give me the Joke Idea, try to continue the Jokes.