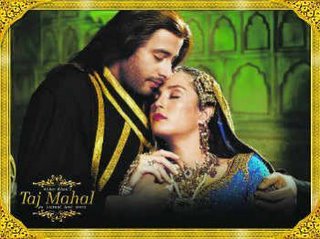 More than Rs 100 crores has gone into Akbar Khan's Taj Mahal-An Eternal Love Story is at last releasing Today worldwide along with its dubbed version in Tamil. Sarya Jehan (granddaughter of the melody queen Noorjehan), a half French and a half Pakistani actress, plays the role of Mumtaz, the symbol of eternal love. Zulfi Syed and Kabir Bedi play the young and old Shah Jahan, one of the greatest lovers in history.

It took four years to complete this epic. Taj Mahal has haunting music by veteran Naushad. Choreography by Saroj Khan and costumes by Anna Singh are the other highlights of the film, which was shot in the Mehrangarh fort in Jodhpur, the Dal Lake in Kashmir and Mumbai studios. Taj Mahal is an eternal favorite with the audience. The first film on the subject, which came in the 1950s, was a hit. Akbar Khan is proud that he has been able to recreate the Mughal era in all its splendour. 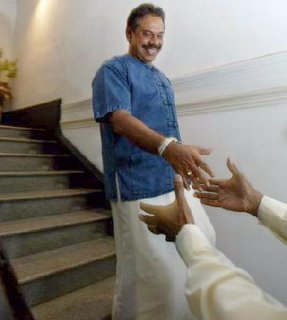 this new guy is a hardliner, let's wait and see how he handles the civil war!

I read in one of the blogs that the film Taj Mahal is waste of time Jeevan. You planning on seeing it? If so, looking forward to your review of the movie

Lumbergh-in-training – yes we let’s wait and see, I like the Ranil Wikramasinga will win, because he only put the ceasefire agreement with LTTE.

Angel – Sure I will see Taj Mahal, I don’t know it is good are bad, I will tell u after I see that movie. I like History movies.

jeevan, no, da pic on my blog was from a webbie dat made art :-P My family ALL has da paintin hand... I jus got da poet hand ;-) PEACE

quz boss - ho it was my mistake, sorry dear. nice poems u have writen.