India will Vote on Nuclear deal in IAEA?

It is not just a race against time, but also a race over a hundred hurdles. Both India and the US would like to see the nuclear deal inked when George Bush comes to Delhi early next year, but the going seems to be tougher than anticipated. For once, it is not just the rhetorical left or the atomically small pacifist community who are crying foul, but even hawks in the far right.

The main problem is lack of clarity about the details of the deal. Even senior officials, including those who negotiated the July 18 joint statement, are giving their own spins to the deal, throwing both the strategic and the scientific communities into confusion

The problem started when the non-proliferation hawks in the US Congress pointed out that the US was changing its laws once and for all whereas India was only making an executive decision from which it could backtrack any time. The state department then tried to pacify the Congress, saying India would first separate its military programme from the civilian programme. These are preconditions [before we] actually present this agreement to the Congress, the state department spokesman said. But the Indian Parliament and public had been told that there would be no preconditions. The joint statement had mentioned that the process of identification of civil and military facilities would be in a phased manner. The US was now asking India to first execute the separation, submit the civil installations to International Atomic Energy Agency (IAEA) safeguards, and then ask the US to change its export control laws.

The Indian strategic community saw this as an act of arm-twisting. The trouble was that India, by filing its civil facilities before IAEA, would be making an international commitment, from which it could never go back. And still there was no guarantee that the US Congress would agree to change its export laws. As the criticism on the deal spread, Ambassador David Mulford did some firefighting. There is some misunderstanding on the eve of his departure for Washington to lobby for the deal with Congressmen. India [only] has to prepare a plan [of separation]. If the US [administration] finds the plan credible, it will take the legislation to the Congress. The actual separation and opening-up to IAEA will be required only after the US amends its laws.

Thus the who-does-what-first has been sorted out for now, but there are a lot more issues threatening to wreck the deal. For one, would India have the freedom to decide which facilities would be civil? A token separation will not be acceptable. "We can’t commit till they show the plan, which will be examined by US nuclear experts. There is total confusion on this. The July 18 joint statement had said that India would place its civilian facilities voluntarily under IAEA safeguards. This was interpreted to mean that India would decide which all facilities to be opened up. But US experts expect all our civilian facilities to be put under safeguards. Foreign Secretary Shyam Saran who, in a lecture at the Institute for Defence Studies and Analyses, said complicated the issue, I see no reason why India should not put all its civil nuclear facilities under IAEA safeguards.

The concern is that the US would not allow India to retain any major facility in the military list. The nuclear powers have placed only 11 centres [six of them in the US] under safeguards, pointed by national security advisers, whereas the Carnegie Endowment has already listed about 60 Indian facilities as civilian. So if the separation plan does not include a good number among the 60, the US is likely to call it a token separation. That would also mean, from the critics’ point of view, that India is not getting the same benefits and advantages as other such states, as promised in the July 18 statement. The five nuclear powers have the freedom to commit only a handful of there hundreds of nuclear facilities to IAEA, whereas, India would be opening the entire civil nuclear spectrum to inspection.

Another hurdle is about reversibility. The US view is that what we put under safeguards are forever, The US is allowed to sign an IAEA safeguards agreement on a list of civilian facilities of their choice, and the US government can withdraw any of these facilities from the list any time they wish. This option, the US has clarified, will not be given to India. Which means that the deal would tie the hands of any future Prime Minister. In case a hostile neighbour builds more bombs, India still would not have the freedom to acquire more plutonium to build more bombs, if all the civil facilities are put under safeguards.

Mulford, who is trying to salvage the deal, did not have much to offer here. The plan has to be shown to the Congress. Once these are put up under safeguards list that is permanent. Critics are also not happy with the commitment on no further testing. After the Pokharan tests of 1998, India declared a unilateral moratorium on testing. But by committing to continue, India’s unilateral moratorium on nuclear testing, India is now making it a multilateral commitment. This is seen as tantamount to restricting future governments from developing the arsenal in case need arises.

However, experts fears, If the moratorium is violated, even the Nuclear Suppliers Group (NSG) can act against us. That means even the civil nuclear programme, which would be dependent on uranium supplies by the NSG, would go for a toss. Given the fact that India wants to develop 30,000 mw of energy from nuclear sources, this would send the economy into a tailspin. There is criticism even from the strategic far right. Defence analysis believes that the US has made India fall into a uranium economy trap. Since imported uranium will enter India’s nuclear fuel cycle at an early stage, all the facilities down the line will have to be put under safeguards. The US has wanted us to get into the uranium economy. If we get into plutonium economy, we are independent. Now with the deal, we are hampering the plutonium economy too. Experts believe that instead of trying to salvage the deal, India should let it collapse. Let the damn thing fail in the US Congress. That is our only hope.

Incidentally, here the left also agrees. Both the CPI (M) and the CPI have warned the government not to vote against Iran at the IAEA governing body meeting on November 24. If Manmohan Singh, to save his government, listens to the warning, an angry US Congress would refuse to legislate nuclear cooperation with India. Happy ending! 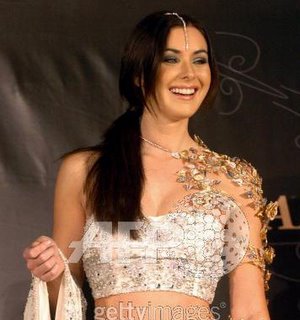 A small news : Miss Universe Natalie Gleboua will be in Chennai on November 25th. To participate in AIDS Awareness Program in Le ROYAL MERIDIEN, Chennai.
Posted by Jeevan at 3:14 pm