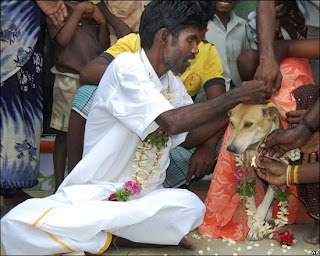 Our people always have come with reason to tell for their superstition. In rural village sides they call donkey marriage, when they organize a wedding between a male and female donkey, where they hope it will bring rain, after that it was frog wedding and every village has their own way for superstition, according to some tradition. Here the reason is different in Selakumar and Selvi’s marriage, actually it’s a kalappu tirumanan (mixed marrage).

Selvakumar, a 34 year old farmer from Tamil Nadu’s Sivagangai district have been stoned to dead two dogs in his rice field and hang them on a tree some 15 years ago and felt unfortunate. He was clueless when he later disabled from hearing, speaking and walking, but where he find an astrologer he told him he was cursed by the spirits of the dogs he had killed and to curse only if he marry a dog and live with it. Then, after a long search he found his pair selvi a four-year-old mongrel bitch and the wedding took place at a Hindu temple. Where Selvi was dressed in sari and flowers and brought to temple and the proceeding where held with a priest before cheering crowds.

The poor selvi was however attempted to escape from them, but was eventually traced down and returned to her new husband. But safely this dog is only for lifting the curse and after that he plans to get a real bride. BBC News
Posted by Jeevan at 10:00 am

lol...so much drama in marriage of the animals, but really is a sad thing. It should be checked.

really funny
stupid people i dont know how they are believing all these things. He should have thought twice before stoning those innocent creatures to death.

DEAR JEEVAN,
really atrocious.surely some follow up must be there to find whether he had got speaking and hearing ability.this astrologer's prediction!!!! and the priest doing this!!!!
how long will these astrologers and pujaris dupe people?.
goodness forbid the birth of a doggy man.
hope Selvi is not being harassed for not bringing any dowri.
what about 'this great man's ' in_laws.

I dunno should be smiling at this idiosyncrasy or be amazed at this kind of ludicrous superstition ....

I read this in the papers last week :) I found that weird LOL!

o well now I know why he did it. tnxx for letting us know Jeevan. Maybe there's some truth in the cursing story..or else why wud he become disabled all of a sudden?

we'll be surprised to the beliefs of people in the other parts of world. guess this is just one of it.

I can't find any logic there, just tie a knot for a dog that he saved from the sin of doggy! it seen like only funny.

Ponniyinselvan - "hope Selvi is not being harassed for not bringing any dowri.
what about 'this great man's ' in_laws." haha... lol.

Crazy.. all these can happen only in India. A real nut!

Enna kodumai saravanan idhu!!! Thank god!! The dog was used only for removing the curse and nothing else... ;)

this is just ridiculous.... feeling very sad about that dog selvi....

haha...wat an idiot..hahaha..hope he doesnt take his marriage too seriously :)