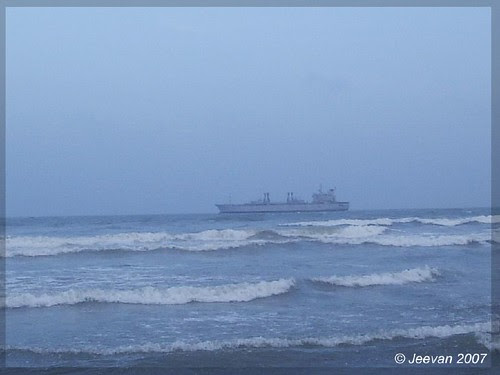 Why does it was a shining Sunday, so well thinking it could help us watching the daring display of Indian Navy along seaside of marina, but late noon closely fell under clouds soon we moving out of our house and wished for a non rainy evening. Just on the way towards marina, joining my cousin and the extend came with traffic cop words of take diversion at some places disturbs where they not help us reaching the shore than put on diversion and put on delayed, but we manage to transit on small cross streets and reached the shore along the fishing hamlets stretch. Where all we get to see is vehicles parked without a space, and something we got to park was near an impurity surrounding with disfavor fragrances, but helped to move soon as we got another place in you heed.
Because of the delay the show was already kick stated and there was this first war ship we saw was a big one where a helicopter takes off from the ships base. The waves are unusual with more waves hitting the shore, even though the navy ships supports to come close. The spot we remain looking was crowded by people from hamlet and those came in vehicles, but too more visible clearly the ships and sky wonders made by navy’s fighter flights. We could only get to watch the speeding boats, sailing ships and submarine and the flights that made skies colorful in the red, green, blue smokes and flies in hundred km’s speed in a hiss above us. It was not like other, we had to receive the flights daring closely and helicopters crosses few meters above the place we stay just rocks the scene.

This show was arranged in celebrating the national navy day that comes yearly on December 4, in memories the 1971’s attack on Karachi’s harbor and a week long programs on varies shores from November to December are arranged. In connecting this there was a show planned in Chennai’s marina beach for people to enjoy the bravo activities that we could have seen only in television and pics. It holds Governor S.S. Barnala as chief gust and the delay was also for him where they stopped all vehicles moving on the road. For me also this is the first time seeing war ships alive and totally of seven ships produces a parade on the sea, but was not visible clearly of cloudy weather and in winter season. There was this war ship moves close to shore was the only one I think to be large in size and then came the delighted and the highlight of the show at the end by late evening all ships comes with in straight line glowing at bright golden lights adorning to the event. It was winding heavily the cam was disturbed to catch the golden chariots like ships on sea. 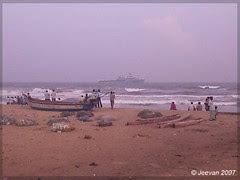 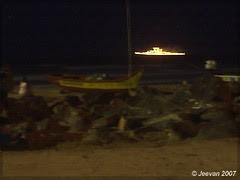 enjoyable experience reading ur post ... it was almost as if I was there ... the pics are very neat Jeevan

Nice shot at the night time.

Alok – Thank you buddy, it's a nice experience

Kavi – Welcome back friend, thanks a lot.

You have a flair for photography too.. Nice snaps!

You don't seem to miss anything that happens in Chennai. Great Jeevan

Shiva – Thank you. I wish not to miss any event happening at Chennai, but I could attend only little.