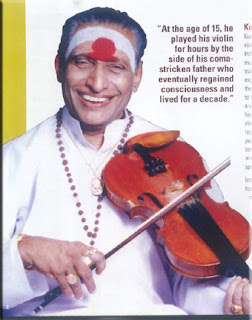 Music is to enjoy anytime as it gives enthusiastic, and no need a matter of knowing Carnatic music, but something to miss the demand increases. Anyone can rub the string with bow to outcomes a sound or tone, but tuning them to rhythm is a beautiful art everyone can’t bring pleasure. The person whom I truly admire for contributing himself to music and up bringing the instrument an interesting model for any generation is none than our great renowned Violinist Kunnakudi Vaidyanathan! On most eventful days I happen to listen his early morning performance in television playing some old and famous Tamil songs through his violin and to wonder how he arrange the verses according to origin just rubbing the strings and moving fingers.

Today I was watching his late videos and interview on television and really felt how lose the death of him to his fans. He told about mother lap, describing his fondling to his native place which brought him renowned name Kunnakudi Vaiyanathan and he plays violin beautifully adorning the way songs composed by musicians of then and now to seeing his expressions to feel the true involvement within itself. I always love someone giving their expressive the way song penned, put a feel for the uttering words, but he don’t use the words in replace with string sounds. No one can replace his position if not for music, but the person himself and kind being. If not him, his creativity of sounds will exist everywhere.
Here's more about the Legend, Kannukudi Vaiyanathan
Posted by Jeevan at 4:33 am

so sad. a loss to music world.

Never heard him play but I am sure it is great loss.

may he rest in peace. he is the best. what you said is true, words are no match for the sounds of the string.

He was such a musical genius.May he find eternal solace.

God! I still remember the way he played during our school silver jubilee. After a couple of devostional songs, his violin started playing "Nethu Rathiri Yemma.." Such a humor he had..may his sould rest nin peace

Yes, he was a great maestro..your post pays a tribute to a great musician

Peace to his soul!

Thank you for sharing.
The sounds of the string is close to me. Violin is my lovely instrument. I played little bit in my school time.
Still love to play.

He was a gifted musician. I still remember him playing "Mannil intha kathalinri" where he said played the breathless part without removing the bow from the strings.

so sad!! huh.. lost yet another legend!!

neways thanks for the post jeevan! was not aware!