The five days World Classical Tamil Conference end on Sunday and it was held like a grand festival with everyone’s attention towards it. There were dance, music, award presentations, exhibitions, processions and symposium by Tamil experts and watched by thousands and lakhs of Tamil people gathered in Coimbatore. 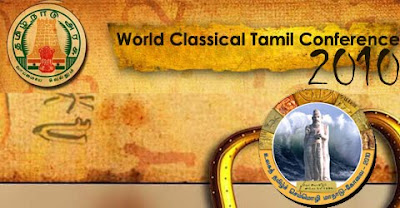 This is the first world Tamil conference held after Tamil receiving classical status, which is the oldest literature among the living languages of the world. I watch the beginning session of this conference inaugurated by the President of India Pratibha Patil before the innumerable Tamil people, who come in eager to learn more about Tamil and listening expert speakers praising the language.

It’s truly honor to see Tamil experts speak in literally and foreigners interest to take Tamil as there language and do research to learn more and exhibit the classic to world. It’s truly great to realize for the first time obviously such a conference being held and inspiring many people those desire to learn and read more about the glories language Tamil.

I too listen to few symposiums spoken by Tamil experts and it feels honor to say I speak Tamil. It’s simply an eye-opener in many ways to Tamil literature and its historic path, thus one of the speakers Jagath Gaspar’s words were touching sense and knowledge and his explanations where among the best about human unity being Tamil community . He says the elaborated DNA chart says Tamil community has crossed 78 generations.

I just think while that being Tamil doesn’t separate us from being unity in humanity and where I see human is a tree and he needs a piece of land to its root to stand and being Tamil it is the language of everything and whatever grows above the soil is equal to everyone. For instance Tamil is like our homes where we could walk bare footed and stay very comfort, but stepping out isn’t same and not every place is like our home. Where society is a common place with difference in everything, and to comes across or grain experience we need to wear something in common other than Tamil. So learning other languages or giving important to one isn’t wrong and well necessary, but there isn’t a comfort place like home, where we’re ourselves.

A language is for communication and we caught up with language which comes easier for us to communicate, but I feel shame that we often communicate with combine language. Tamil is a beautiful language and when it comes out from those experts it inspires a lot to communicate completely in Tamil! It could be a tough task, but I hope if we try we could speak easily and I have an interest in learning new words and meanings that we unknown or only known in other language which is almost English.

While celebrating Tamil as a classical language, hope those however follow the conference like me might get motivate to practice fluent Tamil without influencing other languages, which isn’t less in profound or prior to other. Let’s celebrate the language, the tool of communication and development in society and relationship.
Posted by Jeevan at 6:16 am

Its an amazing event and saw those pictures in Tamil papers too. Interesting facts and gotto learn more from it.

Any language is a part of civilisation and is as old as the human race..

Thanks for sharing these interesting facts.I think Tamil is a beautiful language.

I've been reading all about this in the papers the last few days!

I respect each and every language in this world !

After a long time reading your blog :)

Very interesting event. Sometimes I miss those days when I could go out and attend seminars and conventions, and learn something new every time. But on the other hand if I ever go, I probably will be missing my Matthew even more, can never win lol. Thanks for sharing interesting facts. Anna :)