Watched the Suriya starring 7aum Arivu (7th sense – a Tamil movie), in drive-in theater last evening as family is wonderful to watch once for its special effects and action sequence and plot behind the story. The movie is an inspiration brought up from the life of a Buddhist monk called Bodhidharma who lived during the 5th or 6th century and went to China from our neighboring district Kanchipuram (India) to cure a critical disease spreading there and taught the martial art of Shaolin Kung Fu to Chinese. 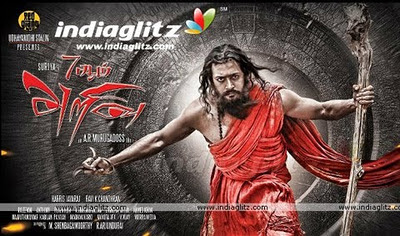 The beginning of the movie describes the life of Bodhidharma for first 20 minutes is fabulous, with Suriya as Bodhidharma has given a try in portraying him isn’t interesting except for its special effects and cinematography, gives a feel of watching newsreel. As usual Suriya lives up to his ability and character and as a circus man he has nothing to do much with the occupation, stands through his silent monk appearance and stunning action scenes.

The concept of bringing back the techniques from the long lost Pallava prince turned Bodhidharma is fantastic but the treatment is weak and hard to appreciate the attempt lacks through the subject. Shruti Haasan as debut has hit the niches with her natural way of acting and with little innocent on face she holds more scope for performance as a young scientist, has a brighter future ahead certainly and not to forget she is Universal hero’s daughter.

Dong Lee is the best choice for the evil role and the Vietnamese American actor and martial artist threats with his eyesight and driving away the people against the leads are damn remarkable and remind me ‘The Mummies’ where the skeletons rose one by one. A. R. Murugadoss, the director of the movie surely deserves praise for coming up with a different concept and relating the past with future and giving a detail depiction of a legend unknown.

The songs are fantastic and help to decorate or promote the film and O’ringa song caught up with the energies of youngster and remind me a song from Crazy frog and there is a feel that the screenplay could have sound better and strong, and about the emotions, it lacks sense and looks artificial. Overall it’s a wonderful movie to watch and makes wonder about the bio war and science and it feels that it would be nicer if history comes along with the story.
Posted by Jeevan at 5:01 am

I watched this movie last night at Prarthna theater and liked it....

Have made a post on it and it will come up on Monday!

Rakesh - wow! I too watched it in Prarthana Drive-in and u went for night and me evening :)

planning to watch it this weekend...

Been hearing absolutely mixed reviews about this movie..

A nice story-line and lovely reading your review of this film.

thanks for sharing nice info...

I have a mixed review.. but the story has definitely won people heart for bringing back something from history..

I watched it on 2nd day :) and I agree with all your points.. We've to appreciate ARMurugadoss but songs didn't appeal me that much :) Could've been even better :)

I have watched this movie too. The first 20 minutes was nice.
I agree with Jeevan. 'it would be nicer if history comes along with the story.'

Thanks a lot everyone for sharing your thoughts on the movie :)

The overall story and concept sounds good. Enjoyed it very much.