It’s we shifted near or they took refuge near us, it’s excite to take a look at the open ground opposite to our home for snakes. Last year at the same time of this season a rat snake came near our compound wall and stayed among the debris and plants for some time since remaining places are filled by rainwater. 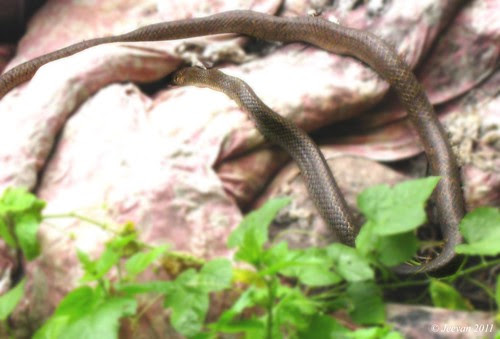 There have been snakes at the open ground for very long time and they sometime comes to visible and during monsoon we could see snake’s often near our compound wall. Even though they are residing there for long time they never attempt to come across the wall or threaten us so far and there are also couple of mongoose residing along with kids and sometimes we could hear a strange noise which mom guess it could be the sound of struggle between snake’s and mongoose. 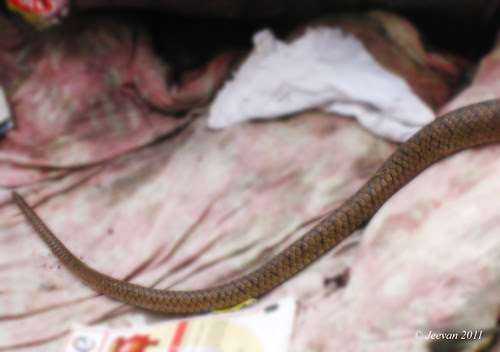 Yesterday also mom saw a mongoose playing with its coupled kids and the photos of the rat tail snake above was also captured by mom last year and I have blurred some part of picture to make the mess-up apart to make clear visible of the snake.
Posted by Jeevan at 12:42 am

Oh.. Rat snake!! These come in search of rats to eat. They don't harm humans (if we don't ill treat them). But be careful.

The first and the only time I saw snake in the wild here was during our bush walking. I was so scared to death.

Oh yeah, with the rains come these guys too!

Thats one of the creatures I dread the most leave alone photographing them...nice captures!